When these packs were meant to be opened

But I still am having a great time when I am watching, and living so close to Canada always gives me a perspective that many others don't have (namely watching events on television as they happen).

I decided to grab another pack of Topps' U.S. Olympic team set the other day. The cards were buried behind all the newer stuff that Topps has issued since the Olympic set came out.

That made me sad. Because this is the time to open cards like these. I know collectors have to obsessively buy whatever is new and then discard it for the Next Thing two weeks later. But back when these cards first arrived, I didn't even know who three-quarters of the Olympians were. Now I don't even know who half of the Olympians are. But, you know, that's progress. I actually can identify some of the people I'm looking at on the cards.

So here's a pack of the stuff ... while the Olympics are actually going on ... while these people are in your consciousness ... before they disappear forever ... before you stop caring about fencing.

And I might have something to say that's informative. 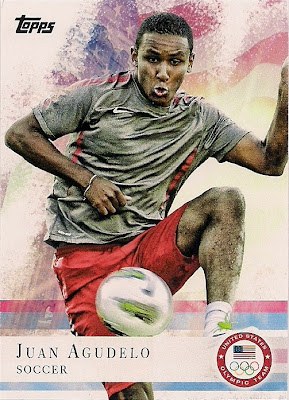 OK, a Topps fail right away.

The U.S. men's soccer team didn't even qualify. Those are the breaks when you produce a set before qualifying is over. That's a stinky part of this set, but I'm not sure how Topps gets around it -- issuing the set after the Olympics is almost pointless. 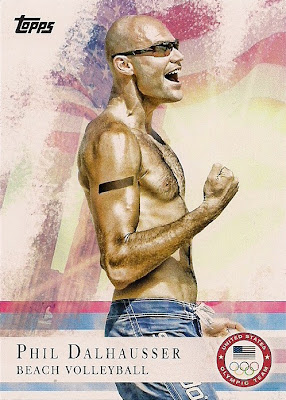 I remember a time when bald, bare-chested men were not allowed in the Olympics.

I'm not a beach volleyball person. Unfortunately, NBC thinks everyone on the planet is. 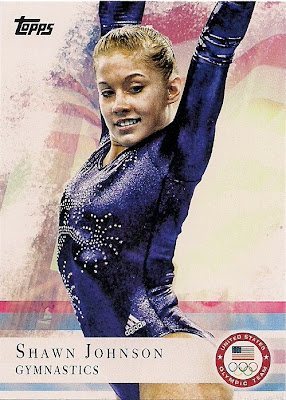 Another person who never made it to the 2012 Olympics. She retired two months ago. Yet, Topps said "she will be a Team USA leader in London." Oops. 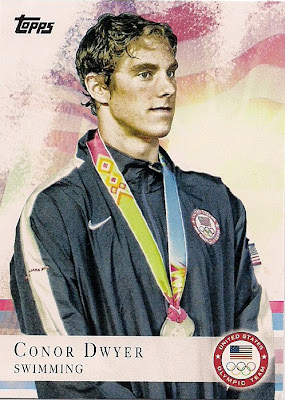 OK, I'm going to fill you in on some inside information about newspaper world.

A big pitfall of covering the Olympic games from afar is most of these people are athletes you have never seen before. Another pitfall is that AP photographers are absolutely incapable of identifying anyone correctly in photos even though they're -- RIGHT THERE.

There was a photo of whatever relay Dwyer was in that won a gold medal (I get confused, swimming has like 227 different events). All four guys standing up showing off their shiny hardware. The only person that AP was able to identify correctly was Michael Phelps. All of the other names were switched. How is that even possible? Well, after obsessively searching the internet and comparing faces of everyone -- on deadline -- I thought I had it. But apparently Dwyer and Ryan Lochte look alike to me. So the IDs were still incorrect in the paper. So thanks to AP, we look like idiots.* 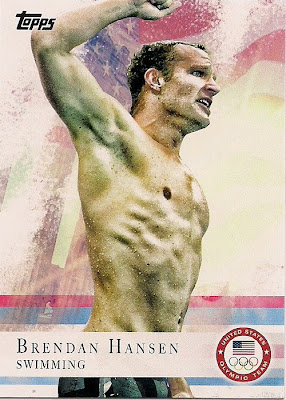 Michael Phelps really saved his butt in the relay yesterday. 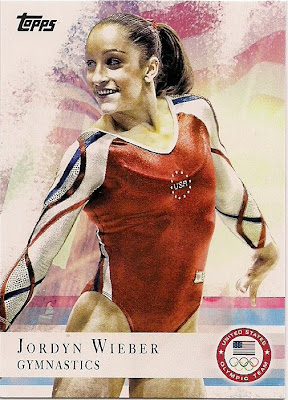 NBC loves gymnastics because it's nonstop waterworks. But all I can think of is how everyone competing is 4-by-4.

OK, that wasn't informative. Wieber is the gal who shockingly did not qualify for the all-around final, but ended up winning gold in the team competition anyway. But you knew all that, because NBC is all gymnastics, all the time. 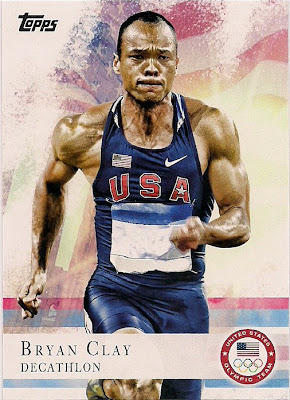 This is absolutely the saddest card in the set. Clay was the 2008 Olympic decathlete champion. That's like being named The Greatest Athlete in the World. But he's not defending his title because he didn't qualify this year. All that training, and he didn't qualify, and Topps puts him in a set anyway. 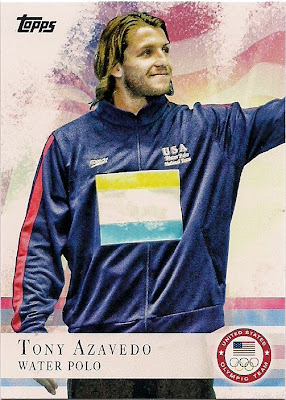 I'm not much into water polo either, but I do know that Azavedo is the captain of the U.S. team. I saw him interviewed by Pierre McGuire (by the way, how strange is it hearing Mike Emmrick say "scooooooooorres!" at a water polo match). Every time I see McGuire, I remember how unpleasant he was when I was trying to interview him a long time ago. And now he's interviewing others. Hmmmmm. 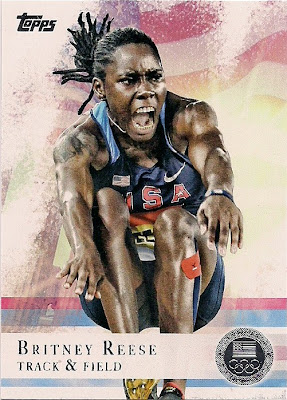 Track and field is just starting so I don't know much about her other than that she was in Beijing. And her twitter handle is @DaLJBeast.

Oh, and the parallels are still annoying. 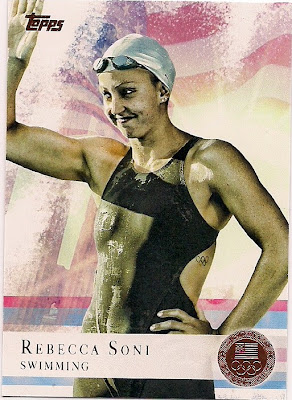 How does she get away with wearing a red swimsuit while everyone else on the women's swim team wears those blue/black things?

So, there you are.

Don't you feel more knowledgeable looking at those cards while the Olympics are taking place?

And now, here are my completely random favorites from the Olympics so far (as inspired by a Play at the Plate post):

There are a whole bunch of these type of sports -- team handball, badminton, archery -- but just about everything about weightlifting fascinates me. It's so weird ... and intriguing.

Sports I can do without?: Beach volleyball, synchronized swimming, track cycling.

Yeah, I have something in common with every tween girl in America. I'm not proud of it.

I gravitate toward indoor volleyball every Olympics. It's probably my favorite sport to watch.

This guy is awesome. Every other shot putter looks like they're having a heart attack before they launch that thing. There's agony and endless talk about the dance they do inside the circle. Majewski just seems to simply throw -- and throws it farther than anyone. And there is no angst. Love it. 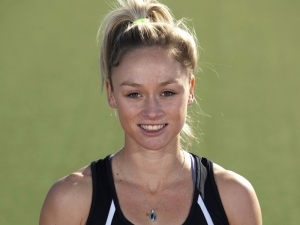 Holy smokes, I'm in love. And she plays like a maniac.

Anyway, I hope you're enjoying the Olympics.

I think I'm going to try to catch some now. But on Canadian TV. NBC has "what we're tweeting about" (good god, who cares?). CTV has Jennifer Hedger.


(*Yes, I fully realize I bagged on AP photographers and used AP photos all in the same post).

runfore!kelloggs baseball cards said…
Nice to see some Olympic cards. The dealers were grabbing up the relic and auto cards, so not many were available at the show, other than the ridiculously priced ones. So, wax was quite expensive for this product.

Dealers I talked to mentioned that prices would get higher for those who won gold. I'm patient enough to know that only a few will be expensive in November.

I also complained about the relay swim gear. Speedo certainly will have a lot to say since Soni's suit was from Arena and Speedo is the team sponsor.
August 5, 2012 at 4:21 PM

Spankee said…
Im glad I'm not the only one completely enthralled by Anita Punt. The new zealand FH team should be on their own channel 24/7
August 5, 2012 at 4:22 PM

Play at the Plate said…
Thanks for the plug.

Weightlifting--I'm too afraid to watch. I half expect their internal organs to come shooting out of their bottoms from the exertion. Or a knee to completely explode.

Archery: Cool, but their bows look like a cross between a bow and those Halo things people with broken necks have screwed to their heads.

Volleyball: I almost spit out my drink today while it was on and the announcer said something like "You can't hit it past the 6'3" Hooker". He was referring to Destinee Hooker, but I didn't know that at the time.

GCA said…
I have a poster at home of Shawn Johnson that I got from a school. It's available to whoever emails me at QAPLAGCA at yahoo. Maybe trade me some cards or something for the postage?
August 6, 2012 at 2:00 PM

Kevin said…
Man, who did Jordyn Wieber cross at Topps? Their Photoshop filter nonsense makes her look demonic on that card.
August 7, 2012 at 9:03 AM