What the devil did I do?

This almost never happens. I faithfully save my pennies and budget my expenditures so that I have just the right amount of cash for cards.

But I have a weakness when it comes to Chrome.

It's difficult to explain. I never complete a Chrome set, I don't even find it all that appealing after a few weeks. But yet, when it arrives, I've GOT TO HAVE IT unlike any kind of card product I know. 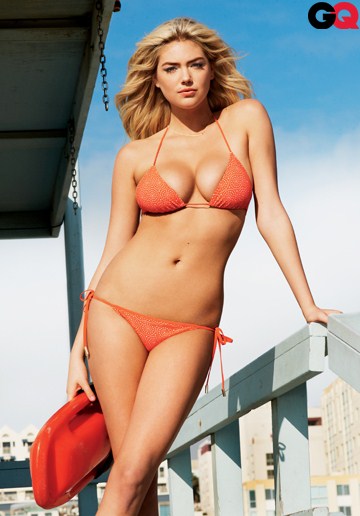 I said any THING else.

But, yes, I've made the Chrome-female of the species connection a number of times before, and it's a good way to describe my behavior in both instances.

So, as you may have surmised, I have already purchased way too much chrome with borrowed money and I feel lousy about it. I really hate that my first post on this year's Chrome is negative, since the first sniff of Chrome is supposed to be like the first pitter-pats of puppy love. It's all googly eyes and fawning and love for life.

But I feel the need to address why I'm so glum after opening my Chrome packs.

This gives you an idea: 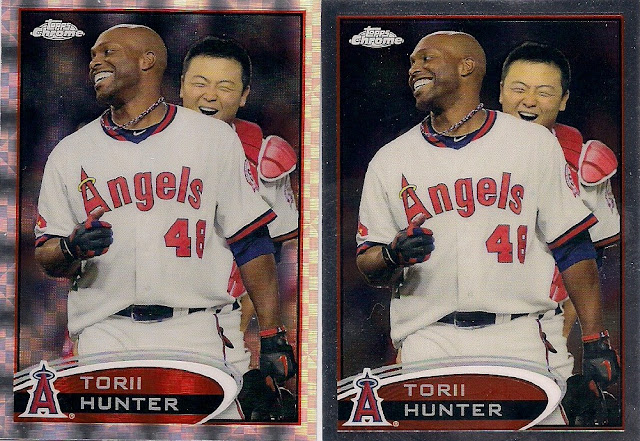 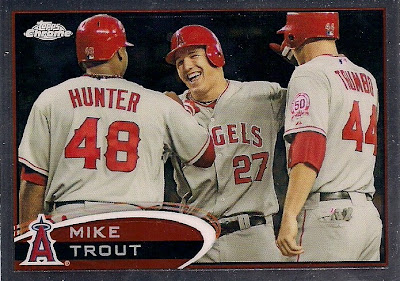 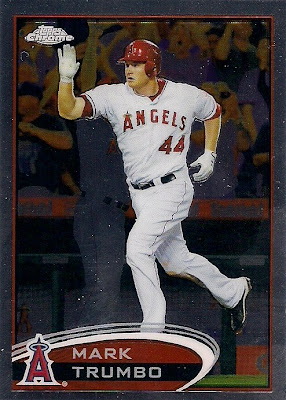 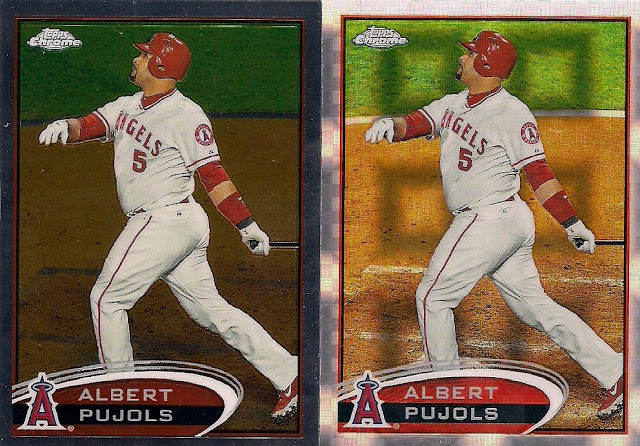 That's six Angels by my count.

I have addressed my ability to pull Angels a number of times on this blog. It's a running theme in my collecting journey. At times this ability comes and goes, replaced briefly by an ability to pull Rockies or Giants or White Sox.

But it always comes back. And I'm always pulling more Angels than any other team. For five years.

Out of my modest collection of Chrome, I have pulled four Braves and four Red Sox. Three Yankees, three Rockies, three Cardinals. Two of many other teams. One of a number of others. And zero of at least one other team.

If the Angels are trying to make me hate them more than I already do, well done.

Just wait until the next "30 Teams" comes out.

But not only is it infuriating and demoralizing and a tad spooky, but it's depressing.

I don't want to be one of those collectors who never buys random packs. I always want to buy random packs. I don't think I'll ever swear that off and just buy the team set online. It's not as fun. Please don't make me look up the post in which I rant about that.

I am also fully aware that these are the chances that I take when I buy random packs. I know all that.

But more than FIVE YEARS of pulling more Angels cards than anything else? That's freaky.

What the devil did I do to deserve this?

Anyway, I'll get over this, and I'll still be buying random packs, and there WILL be an ode to Chrome in the future.

Just consider this an "I'm hating myself in the morning" post.

dayf said…
Huh, it's been a while since you wrote a post where you didn't show off any cards. Maybe you should go ahead and buy some packs of Chrome. You like Chrome, right?
August 29, 2012 at 8:49 PM

jacobmrley said…
I am going to K-Mart tomorrow. I will probably break down and get some Chrome myself. I will gladly trade my Dodgers for that Trout.
August 29, 2012 at 9:28 PM

Captain Canuck said…
without question your best post ever.
although I don't remember you ever posting without showing at least one card....
no matter.... Hall of Fame posting right there.
August 29, 2012 at 9:46 PM

Robert said…
"What the devil did I do to deserve this" on a post about the Angels.

Jeff said…
Could be worse, you could be an Angel fan and pull Dodgers. Its like being the little brother that can never live up to the older brother. The Dodgers even ripped off the Angels as landlords at Chavez Ravine... but I digress
August 30, 2012 at 2:09 AM

night owl said…
"It's like being the little brother than can never live up to the older brother ..."