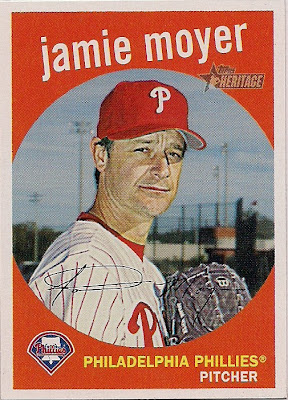 I've written way too often about Jamie Moyer on this blog, but I can't help it. When you're in your mid-40s, you find a guy like this fascinating.

As I mentioned before, Moyer has been the gauge by which I judge whether I'm still young or not. The gauge used to be whether there were any current players in the major leagues who had been playing before I started paying attention to baseball. That ship sailed when Dennis Eckersley retired.

Now, it's "are there any major leaguers older than I am?" For years, Moyer was my fountain of youth. Playing baseball kept him young, I would imagine, but it kept me young, too.

But then he suffered an injury and it looked doubtful whether a guy in his late 40s would be able to come back from it. For an entire year, I was older than every major league player. What a bummer. But of course, he did come back, and made a major league roster this season and, yesterday, won a game at age 49 for the Colorado Rockies.

Young again. Jamie. Me. And a whole bunch of other people my age.

To celebrate time moving backward, I pulled out the favorite Moyer cards in my collection. I don't have very many. I don't have any of his rookie cards from 1987. Up until a few years ago, and until I hit my 40s, there was no real reason to collect him. He was a Cub ... er, Ranger ...er, Cardinal ... er, Oriole ... er, Mariner. Why would I want cards of him?

But at age 40, it's all about perspective. You'll find out when you're that age.

So here are the few Moyer gems of mine. Take a look, and feel the years melt away: 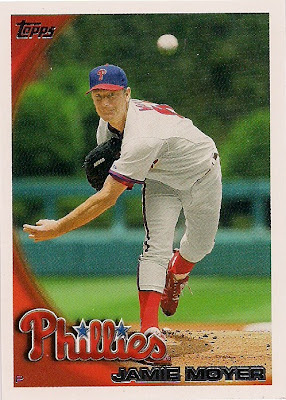 2010 Topps Update: This is a former Cardboard Appreciation subject. It's also the most recent card of Moyer's that I have, which makes it the card that features him at his oldest. Fire that pitch to the plate, grandpa (hey, I can say that. When he was 3 years old, I wasn't even born!)

One of those facts people trot out in these situations to make us all feel old: In 2010, 107 pitchers made their major league debut. More than 40 were either born the year Moyer made his major league debut (1986) or afterward. 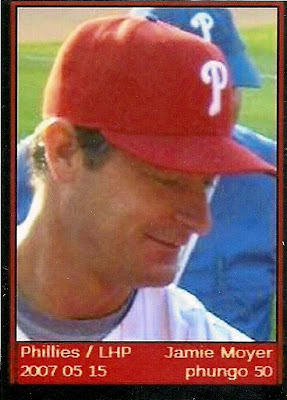 2011 Phungo: These cards, produced by Phungo himself, aren't easy to find. And it's a nice, tight shot of Moyer signing for a fan.

One of those facts people trot out in these situations to make us all feel old: Both Moyer and current Rockies manager Jim Tracy were in the Cubs' minor league system in 1984. Credit to Moyer though. He was on his way up, while Tracy was on his way down. 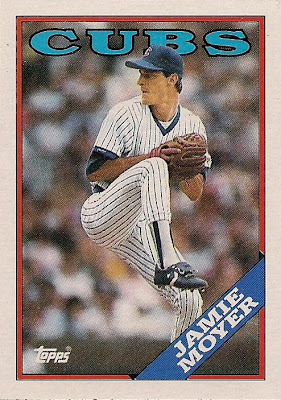 1988 Topps: This is the earliest Moyer card that I have. There are what appear to be hundreds of cards of Moyer in this exact pitching pose. But I love the framing of 1988 Topps and this particular shot looks the best to me.

One of those facts people trot out in these situations to make us all feel old: Three teammates of Moyer's on that 1988 Cubs team are enshrined in the Hall of Fame (Sandberg, Dawson and Gossage). Another will be elected very soon (Maddux). Maddux is four years younger than Moyer, who -- have I mentioned? -- is still playing. 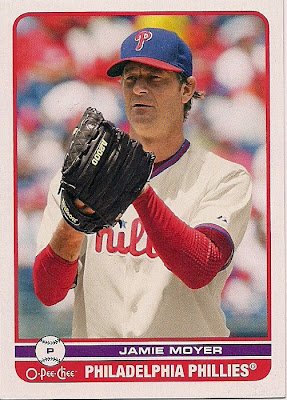 2009 Upper Deck O-Pee-Chee: Ooooh, look at that grizzled, wily veteran plotting his next pitch to the batter. You've got to like that.

One of those photos people trot out in these situations to make us all feel old: OK, this is mean, but here goes. Here is Moyer's 1989 Topps card: 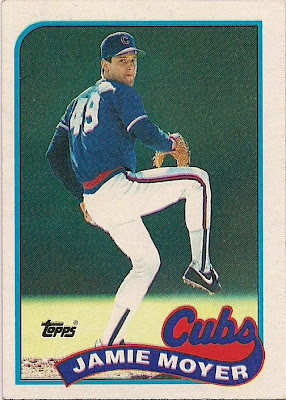 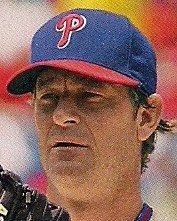 That's what 25 years in the major leagues can do to you.

I told you it was mean. 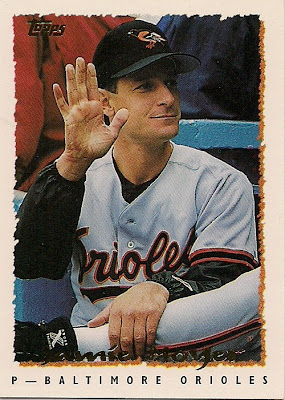 1995 Topps: I don't have the 1994 Score card of Moyer, which is a great photo of him relaxing in the stands, so this will have to do. I've always liked this shot. I will always wonder who he spotted in the stands that drew a wave.

One of those facts that people trot out in these situations to make all us feel old: Gas was $1.09/gallon in 1995. 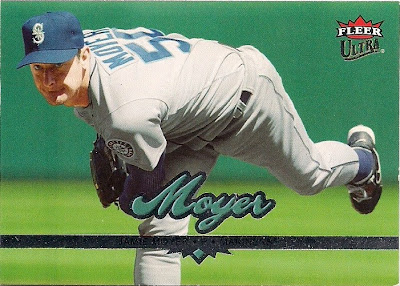 2006 Fleer Ultra: This is my favorite Jamie Moyer card ever. It's been a candidate for Cardboard Appreciation several times, but never made the cut ... yet.

There is so much I like about it. The close up shot of Moyer releasing the ball. The intensity on Moyer's face (he always makes a certain lip expression when he releases the ball). The Greeness of the card. I'm really not much for Fleer Ultra, but -- wow -- this is a great one.

One of those facts that people trot out in these situations to make us all feel old: There are only two members of the 2006 Mariners still with the team: Ichiro Suzuki and Felix Hernandez.

My hope is that Moyer pitches for several more years and I have the opportunity to collect current cards of a 50-year-old in the major leagues.

You never know, maybe they'll call me up and ask if I can come in and relieve the old man.

deal said…
I have 2 keep me young players left, Moyer and Omar Vizquel.


Umm, could you pass the Metamucil?

SpastikMooss said…
One more fact for you: Moyer debuted in the major leagues about a month before I was born. Which makes me feel old since every other player debuted after I was born. We're sort of at opposite ends of the spectrum.
April 18, 2012 at 9:14 PM

JediJeff said…
What was happening on that 95 Topps Jamie Moyer?

Cool Breeze said…
WOW,i remember gas being .99c a gallon AND complaining about it then,yes,Moyer is the only player older than me as well.Keep pitching and make me feel young.