April 09, 2012
I've returned from a trip and am trying to get my bearings back, while plunging head-long into hateful work again.

Easter was fine, thanks for asking. It's a bit unusual celebrating holidays while monitoring food intake, but it wasn't as bad as I thought. There were plenty of other ways to have a good time. And it helps that baseball has returned to the airwaves.

I don't have much time today, so I thought I'd show a small mailing that I received that packs a lot of punch.

This package featured a few more cards from Greg, who is always finding cool stuff for me.

He sent me three cards for my 1971 Topps completion quest, which you will find here: 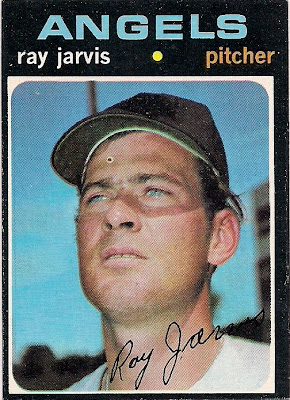 #526 - Ray Jarvis. He looks like he has one of those laser pointers targeting his forehead. Yikes. Let's not think about that. 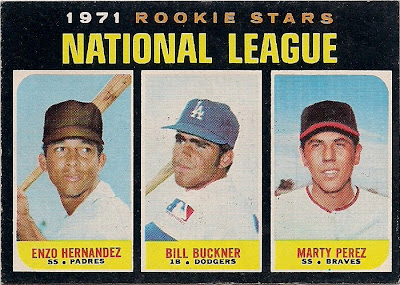 #529 - 1971 Rookie Stars, National League. Or "Bill Buckner's Second Rookie Card." His real rookie card is in the 1970 set. I need another one of these cards for the Dodger collection. But, again, let's not think about that. 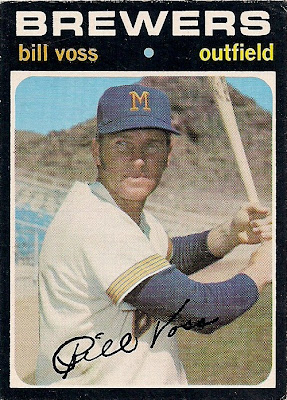 #671 - Bill Voss. A super high-number item. So, I am thrilled by this card, and I haven't even mentioned the spring training mountain in Arizona whose name I always forget.

As you know, whenever I acquire 1971 needs, I calculate the percentage of the set that I now own. But Greg sent along a note with the new percentage: 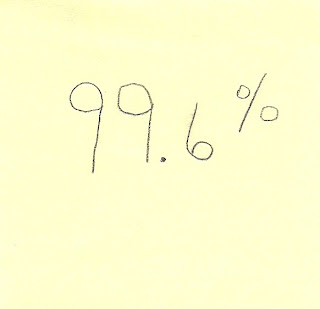 I love it when people do my math for me.

I need just three cards to finish off the set, which I may or may not be able to pick up this weekend. Two are super high numbers, which shouldn't be too difficult to find. The other is Roberto Clemente, which I will probably have to land online because I'll never find one for a reasonable cost at this weekend's card show.

If you knew how cool I thought the 1971 set was at age 13 and how unattainable I thought a complete set of '71s was for the following three decades, you would understand how crazy it is that I am this close to finishing off the project.

But in the event you are unfathomably bored by '71s, here is the other card that came in the package: 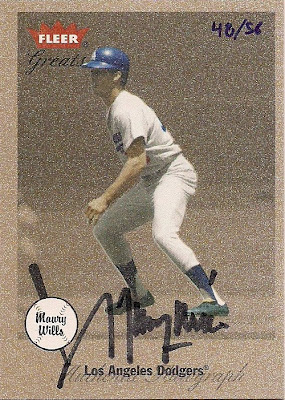 That is a hard-signed, hand-numbered autograph card of Maury Wills.

I'm sorry if I don't sound as excited as I should be. But you missed the happy dance.

I still think it's tremendous. 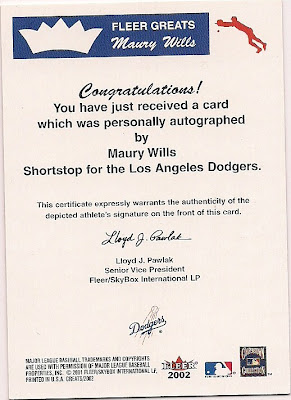 And once again, I am to be congratulated.

I've got to run again I'm afraid. I have had almost no chance to read anyone's blogs since Thursday. I will try to catch up in the days to come, but that might be a little difficult. So if there are any absolute must-reads, please point me in the right direction.

JediJeff said…
You got the moves like Jagger. Or did you eat something that didn't agree with your tummy?
April 9, 2012 at 7:35 PM

arpsmith said…
Happy belated Easter and congrats to being so close. I have started working on sets for 75, 70 and 73 over the past couple months and can't imagine getting so close. Enjoy the show and good luck finding those cards.
April 9, 2012 at 7:50 PM

GCA said…
Thought I had just completed my '71 set after a show last weekend too, but found one high number missing (Ron Swoboda). Would have rather had Vida Blue (and Aaron, Perez and Clemente) be my last four, but gremlins are a bitch.
April 9, 2012 at 7:53 PM

runfore!kelloggs baseball cards said…
So, I won't give details about all of the junk I ate yesterday and today.

I hope that you do better than I did in completing the 1971 set. Of my ten collector friends only one would part with the Billy Martin manager card. I know I gave up a handful of cards, mostly stars. As a nine-year old in the prehistoric days without price guides, I didn't care what it took.
April 9, 2012 at 7:59 PM

chuckneo said…
An on-card Maury Wills gets 2nd nod (and deservedly so)? That's a helluva post!