Another reason to display your cards by card number

My Dodgers are in order by year, then set, then player.

My incomplete sets that are in either binders or boxes are in order by team most times, but by number periodically.

But my complete sets? They are all in order by card number, almost without exception.

I'm sure I've gone through this before. But searching for cards that you want when they are in order by card number can be an absolute pain. It's a lot easier to find a card if they're in alphabetical order (who has the time for that?) or by team. So that's why I have a lot of my sets in order by team.

But I can put my complete sets in order by number because there is little chance that I am going to break up the set. I don't need to search for particular cards to trade or ship off to people, so I put them in order by number as the card maker apparently intended that to happen. I feel like I'm continuing a collecting tradition.

I have done this for every single completed set. Except for one. For some reason -- probably because I'm fixated on color and was so proud that this set attached the correct color to the correct league -- I sorted my complete 1981 Drake's Big Hitters set in order by league.

I even did a post on the set because it was such a proud moment for me back in 1981 to have a completed set of any kind. Even one with only 33 cards.

One of the comments on that post noted that throughout almost the entire set, the cards alternated between a white player and a black player. I had never noticed this before, but had no reason to doubt it. "Ha, ha," I thought to myself and never bothered to investigate.

For some reason, I thought about it now.

I rearranged the cards in order by number, placed them back into the pages, and this is what I found: 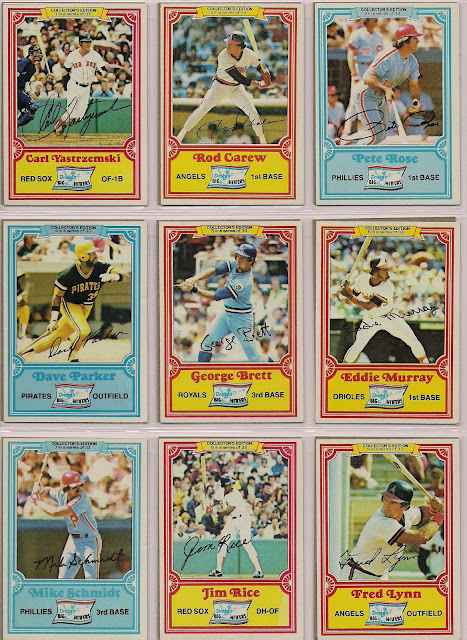 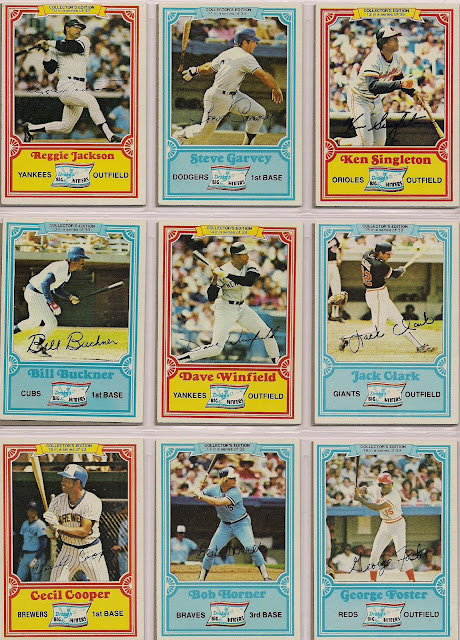 OK, definitely something deliberate going on. 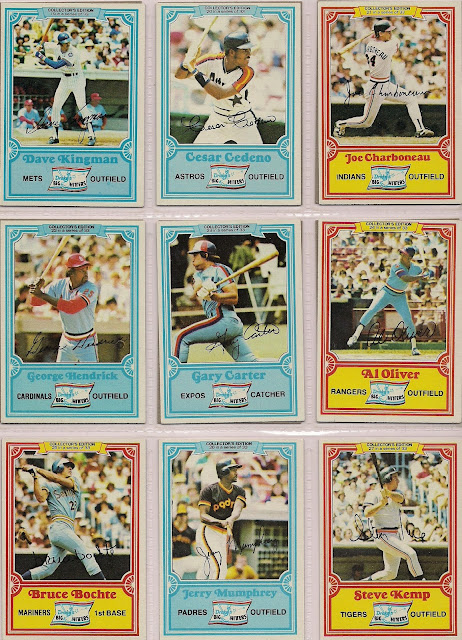 What are the actual odds that this was just a coincidence? 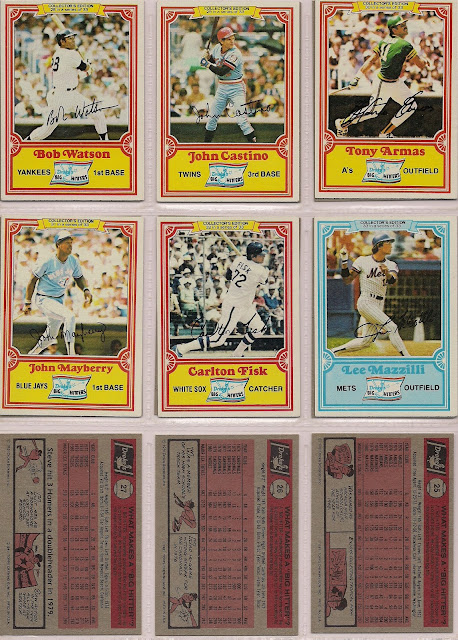 And the pattern falls apart in the final four cards. It's almost as if Drake's said, "See? We weren't obsessed with race. The last four guys don't alternate at all!"

It reminds me of when I used to collect 45s. I got into this obsession of collecting only 45s of records that went to No. 1 on the Billboard charts. I accumulated quite a few by going to this one record store.

But I didn't want anyone to know that I was doing it for some reason that I can't remember.

One day, there was a different check-out clerk at the store and he was loud and kind of annoying. I brought my records to him and he said, "HEY! THESE ARE ALL NO. 1 RECORDS!" I wasn't pleased.

Then he told me that a couple of them were discounted and I could go back and get another record or two if I wanted. I purposely went back and found a record that not only didn't go to No. 1, but barely charted. I brought it to him and he said, "Well, THIS isn't a No. 1 record."

I smiled inside. I have no idea why.

Maybe Drake's -- which was really Topps since Topps produced the set -- didn't want anyone to know the reason why they alternated races on most of the cards. Or maybe there wasn't a reason, but they want the mystery to continue for infinity. It's a weird kind of power to have.

Whatever the reason. Or whatever the non-reason, no one would have figured it out if they didn't put their cards in order by card number.

arpsmith said…
Interesting insight, I don't think I ever would have discovered that on my own. Definitely think you are onto something, too much of a pattern to be a coincidence!
April 6, 2012 at 7:59 PM

John Bateman said…
Hey, that was me Night Owl. When I got this set when it first came out, I noticed the distinct color design between the National and American league players and then that is when I notice the player selection, when the cards were grouped in Numerical Order.

Still have the set and it is one of my favorites of all time. Loved that the backs were in 1981 format

It is interesting that you classified Tony Armas as Black (actually Hispanic)- I am going to do a post about that.
April 6, 2012 at 8:15 PM

Collective Troll said…
Greg - you NEVER disappoint!!! I saw the title of yer post and thought "its opening freakining day and night owl is writing about how to store cards, wtf?"
AND THEN... This becomes the best thing I read all day for many different reasons... The key to me is the Go Go Charboneau in the Drake set... I got that very card around 1983 from an older kid in the neighborhood... I had never heard of Charboneau before and that card made my head explode... The stats on the back were outstanding, the name was weird - he sounded like a superstar, but I searched the boxscores in the paper that day and couldn't find him... Of course this was pre google and my baseball encyclodpedia was a few years old and didn't include Charboneau... It drove me insane that I had a card of a guy who hit 20+ homers whom I had never heard of and had never seen play... Where was he? Who was he? Where did he play??? It drove me crazy... I hadn't thought of that card for a long time - until today... Now I am going crazy again... Oh - and you used to collect records? Why has that never came out before? Viva vinyl and happy opening day! Dee Gordon is quickly becoming one of my favorite NL players - the more I watch him play. Awesome. GREAT post as always Greg! Cheers!
April 6, 2012 at 8:46 PM

Anonymous said…
Wow, now I'm wondering if there was some reason for the order in Topps sets. I've always hated the "order" they gave the cards... always seemed too arbitrary to convince me they had a reason for Gary Alexander to be card #11 or something. The '82 Topps doesn't alternate like this Drake set, but it does make me think that maybe just maybe there might be reason for the order.
April 7, 2012 at 11:18 AM

Fuji said…
Wow... I never would have figured out this pattern on my own. Great detective work. I kept thinking to myself, blue represents the NL, while the red represents the AL.