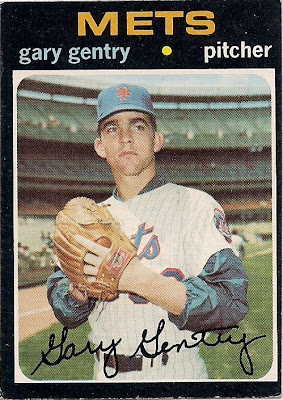 Even though I'm down to needing just 3 cards to complete the 1971 Topps set, I won't be scouting out the '71 binder when I'm at the card show this weekend.

Since my post about how close I am to finishing off this set, I have received correspondence from three different people telling me they each had one of the last cards I needed.

The first one arrived yesterday. It's #725 Gary Gentry and came from the always helpful mr haverkamp. As usual, the card came in a top loader, which was taped to a piece of cardboard from a Pop Tarts box. He must have won a free supply from Kellogg's at some point.

That means, for the first time in I don't know how long -- probably at least five years --  I will not look at those three sets and am freed up to chase other cards. Kind of scary breaking out of the routine a little bit. Which is why I won't veer too much from the pattern I've set over the years.

Here is what I plan to chase: 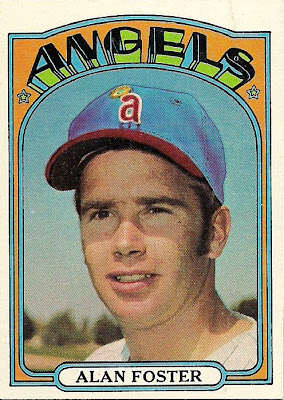 1972 Topps: Of course. I have gone entire shows recently without even looking at a '72 Topps card. It's time I crack down on this set -- maybe even hunting down some crazy high numbers to show old '72 that I am dead serious about completing this thing. 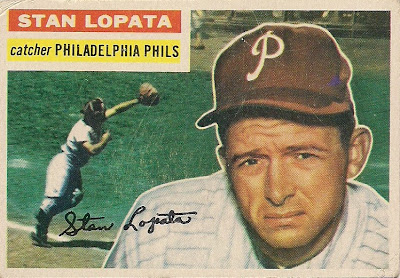 1956 Topps: Another set that I have been neglecting. If I ever hope to complete it (and that's a major "if"), I'm going to have to do more than grab one 1956 card every show. But I already have two specific cards in mind from the set that I MUST buy. And, who knows, maybe I'll go for a big-ticket card and it will be the only thing that returns home with me. 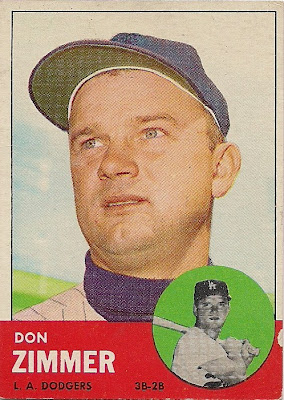 1960s Dodgers: More neglect. I need lots of Dodgers from 1962-64, and then some nasty high numbers between 1965-67. The best place to find at least some of these will be the discount boxes.

I won't say "dime boxes" because I've never seen a "dime box" in my life. "Dollar boxes"? All the time. "50-cent boxes"? Definitely. A box where all cards are only 10 cents? Never. It's that stupid cost of living in the Northeast, I guess.

Anyway, I'll be hitting those boxes early upon arrival and see what I find. Maybe I'll get lucky and never go anywhere else. 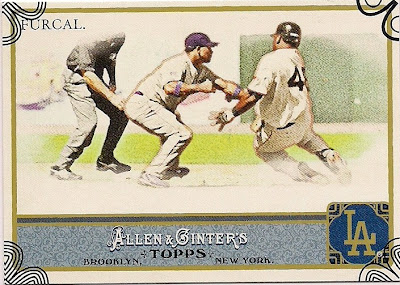 2011 Allen & Ginter: That means only two cards. Manny Ramirez (it's an SP, so not sure if I'll find it) and the dastardly Rafael Furcal card, of which I have two different mini versions and this infuriating "code" card, but not a second base card.

While I'm at the table that usually features modern cards, I'll try to track down some recent inserts and maybe some Dodger needs from the last 3 or 4 years. This is always difficult because it requires that I bring my lists. But I can't possibly print off all the lists that I need from 2007-2011 (the Bowman alone will take me ages to go through).

Fortunately, I'll have my blog and my phone, and look all impressive. The chicks will be all over me. 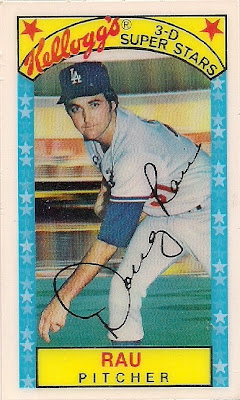 Kellogg's cards (and other assorted needs): There are always cards that I want that I never think of until, say, November, when the next card show is eons away. Fleer Greats of the Game inserts, Topps All-Time Fan Favorites, oddballs from the late '80s (not that I ever see that at card shows), stuff like that.

I will make a concerted effort to get some of those cards, especially Kellogg's because I know a dealer who has a binder full of them. I'll be searching out early '70s Dodger needs, but I actually really hope he has some '81 Kellogg's. For some reason I have never obtained the Dodgers in that set.

As for the other oddballs and random inserts, I'll have to hope they pop up in dime ... er, 50-cent boxes, because I'll never think of them otherwise.

So, anyway, that's the plan.

Will I be derailed by the sight of a '54 Bowman Dodger or some other super-vintage card? Probably. Will I suddenly get lost in a 1977 Topps binder and blow money on those cards even though I can find them anytime I want, for cheap, online? Possibly.

But I won't beat myself up over it, because everything I find will be great.

This isn't like visiting the card aisle at Wal-Mart, you know.

Commishbob said…
The '72 Alan Foster sports one of the worse airbrush jobs in Topps history. It's laughable. He looks like he's modeling for the Alien Attacks series.

Nick said…
I wonder if dime boxes are a type of regional thing. I seem to find them at pretty much every show I go to here in the Midwest. (That might not be a bad idea for a post of mine in the future...)

arpsmith said…
Enjoy the card show. I am jealous. There never seem to be shows where I live in Orange County, CA. Good luck in hitting your wants.
April 14, 2012 at 3:10 PM