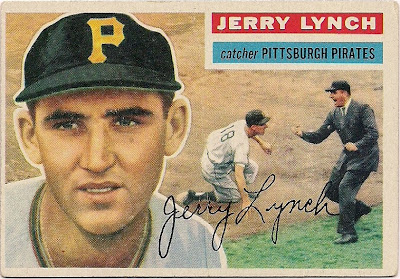 Another month went by without me displaying a '56 card. Shame, shame, shame on Night Owl.

I'll try to make up for it by showing two this month. There is a card show approaching, so finding a '56 or two is a distinct possibility. In fact, there is one in particular that I absolutely must obtain. If I do, you will see that before the month is out.

Anyway, I'm displaying this card because of Jerry Lynch's passing on Sunday. He was 81 and he will forever be known as one of the most reliable players in the history of major league baseball.

Lynch was an expert pinch-hitter. When he retired, he held the all-time record in pinch-hit home runs and he remains one of the most successful pinch-hitters ever, ranking among the very best in total hits. One hundred and 16 times he produced a pinch hit.

Lynch is known for his timely hitting during the 1961 season when he helped the Cincinnati Reds to the National League pennant. When the Reds needed a hit, they brought Lynch off the bench and, time after time after time, he would produce. He received MVP votes for his pinch-hitting ability in '61.

That is an admirable quality. It's not easy to come off the bench and get a hit in a situation when the team absolutely NEEDS a hit. Why else would they specifically ask for you to hit? "We really NEED a hit. JERRY, can you PLEASE get us a hit?"

Being reliable is very important to me. As an editor, it means everything. And ever since I became an editor -- which is basically like being a boss in the newspaper world -- I've noted how many people are hopelessly unreliable (I'm going through a major reliability deficiency with someone in particular right now).

But it's not just in the job, although that's where it can be the most frustrating. It's everywhere you look and in just about every situation, from large to small. An epidemic of people dropping the ball.

I'm not a stickler about this -- it's not like I'm calling people out on it all the time. But I DO notice when it happens, and it happens a lot.

So I completely respect what Lynch did during his career. The teams for which he played  -- the Reds and the Pirates -- asked him to do something, and -- holy crap -- he actually DID it.

He deserves much better than being featured getting called out on his baseball card. 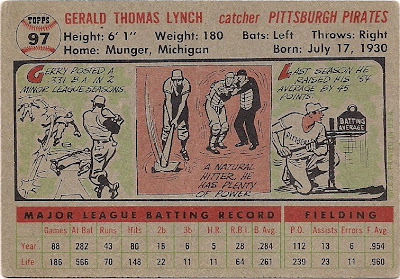 (P.S.: I fully realize that I just ranted about reliability and I can't even commit to posting a 1956 card every month in a series called "'56 of the Month." I'll work on that).

Andy said…
Sorry for the off-topic post but I am hoping to get some love for a rare foray into card doctoring:

reminds me of the guy who i picture when someone says 'pinch hitter extraordinaire' - manny mota.

i remember watching him at games long gone by and i cant count the number of times he got the hit as ordered. especially game-winners.
April 4, 2012 at 5:29 AM