April 02, 2012
I'm already a week behind with this, which pretty much undermines the whole intent of this post. But at least I'm not 16 years behind, like CBS was.

I had not planned to write about CBS's report on the "pending death of baseball card collecting." I didn't think it deserved a response and got way too much attention. The report was shallow, one-sided and, most importantly, about as untimely as anything that I could remember coming out of a news organization. One of the largest insults that a journalist can throw at a story is that it is "old news." CBS's report was definitely old news.

Consider the time frame. CBS was reporting on the demise of the card collecting industry, as it relates to a time period that is now 20-25 years old. The background details in the report are all years old. The boom in collecting (mid-to-late '80s), the glut of card companies (late '80s-to-mid '90s), the record number of sales (early '90s), the baseball strike (mid '90s), the rise of the internet (mid-to-late '90s). This is like someone doing a report, in 2012, on the collapse of grunge music and explaining to us about Nirvana and Kurt Cobain's suicide.

WE KNOW ALL OF THIS ALREADY!

This isn't knowledge that only those inside the hobby know. Or only collectors know. Regular sports fans have known about this for years.

If you were around during the baseball strike and immediately after it ended, you probably remember that there were endless reports about how the strike negatively affected baseball. There were constant stories on decline in attendance, job cutbacks relating to baseball, and, yes, a huge drop in memorabilia revenue. There were even reports that memorabilia dealers would never regain what they once had. All about 16 years before last week's report.

One of the reasons it took me a week to write about this was that I was looking for an article that documented the very same thing as the CBS report. I had saved the article from back when I had a subscription to Sports Illustrated. 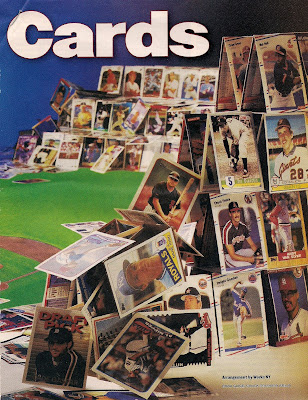 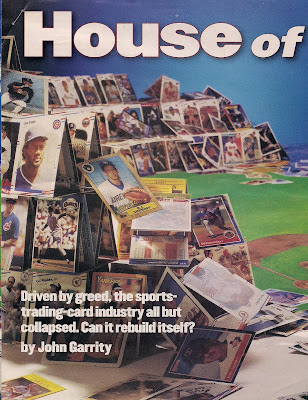 Well, what do you know? CBS even used the same title that Sports Illustrated did.

This article, written by John Garrity, appeared in SI on July 29, 1996. It addresses many of the same themes that the CBS report does, but without the predicted doom, which is a much more realistic outlook in my opinion.

But the key element is that a report like this is so much more timely in 1996 than it is in 2012. In '96, fans and collectors were still getting over the baseball strike, card companies were slashing the number of cards in their set and coming up with all kinds of gimmicks attempting to recapture the glory years of the early '90s. A story like this made sense in 1996.

But in 2012 -- with collectors able to order cards online from a variety of places, with eBay revolutionizing the way collectors buy and sell cards, with video box breaks everywhere you turn -- it doesn't make sense at all. Where is the impetus for a story like this? Please don't say it was because somebody stopped at a card show in New Jersey and didn't see kids there. That's nothing around which to base a story.

It seems the guys interviewed for that story were desperately clinging to something that doesn't exist anymore. They want 1989 to come back. But it's never coming back.

Speaking of which, perhaps CBS could have found an opposing viewpoint if it merely googled "baseball card blog" and found a legion of collectors -- many of whom are actually under 30 years old -- who could explain to them how they still enjoy baseball cards even though they (*gasp*) are not old, white or even male. But instead, CBS looked at the "explosion of the internet" as if it was bad for card collecting.

If I was asked for my input, as someone who collected in the '70s, '80s, '90s and today, I would say, yes, there aren't as many collectors as there once was, and, no, they don't collect the way they did in the 1980s. But there sure are a lot of people out there who find collecting fun. Come join me on eBay and I'll point out a few.

I would also explain to them that I go to a few card shows a year and every single time (*gasp again*) I see kids there. I'm pretty sure that they are kids because they're awfully short and they have high-pitched voices and they move a lot faster than I do, and they say really stupid things that grown-ups would never say. So, yes, there are definitely kids at the shows. Every time. Not as many as there used to be. But, YOU NEED TO GET OVER THAT.

I think I've said this before, but when my daughter was younger, her class had some sort of auction. Kids were asked to bring things that could be donated to be auctioned off and the kids in the class could bid on them. I sent my daughter off with some baseball cards. I certainly have a few spare cards lying around.

When my daughter came home, she reported that what she brought was by far the most popular item in the auction. The boys, she said, were falling all over themselves to get some of the cards.

These are supposedly the same creatures who are video zombies who don't recognize cardboard. 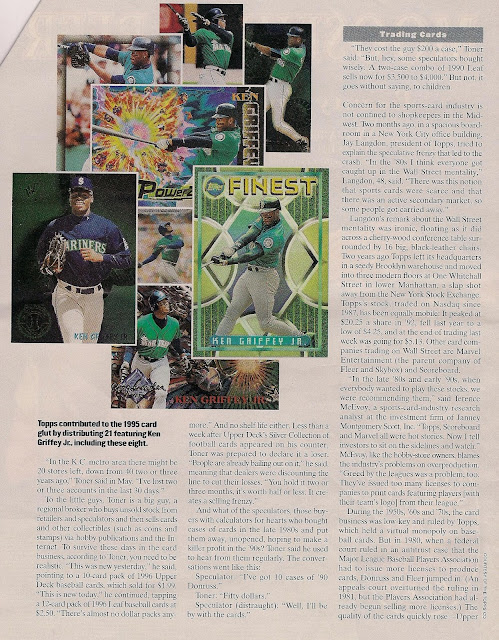 But there was never a part of me that said, "that's the end of the hobby."

Card collecting has been around for over a 100 years. There will always be a need to collect SOMETHING. I think as long as parents continue to take their kids to the ballpark, baseball cards will still have an appeal to what may be now a niche group. But, really, that's OK. I don't want to have to take a number to see some dealer's binder of 1972 Topps anyway. Why would I want to be around a bunch of people who only look at cards as investments? That may be great for the dealer, but not for the collector.

Card dealers as you may have noticed, can be a pessimistic lot. I think CBS got suckered into that a little bit. But it also didn't do its research, relied on facts that had been floating around the masses for more than a decade, and didn't look for the other side of the story.

These are pretty significant mistakes in journalism. As a print journalist, I admit I have a pretty dim view of television journalism (although good TV journalism definitely exists).

And, so, there are probably some of you saying, what are you getting so worked up over? It was just a TV report. It's not that big of a deal.

Maybe. But a sloppy report like this only confirms my fear that if people continue to stop reading, they're only going to get stories and coverage like the CBS report and on much more important topics than whether people will still be collecting baseball cards 25 years from now.

That's what bothers me the most about that story.

Play at the Plate said…
I didn't address this in a post and won't, but I don't have the journalism ties you do. The CBS story smacks of laziness. It's as if they took that outdated information and ran with it without putting one ounce of effort into coming up with anything up to date.

As an aside, my other problem with TV and Internet media is in their desire to be the first to put out information, they often overlook something as simple as the truth. Facts seem to be secondary to being first. I've experienced that on at least three occasions personally.
April 2, 2012 at 2:37 AM

Anonymous said…
Great writeup! Good point that dealers can tend to be a negative lot - I haven't thought of it that way, but once you point it out, it's like "yes they sure are!"

I've gone to the show in White Plains and there's one particular dealer who isn't that way. He's a business person who's trying to make a profit, not someone who's just there whining that things aren't what they used to be. I didn't realize it right away, but I bought some cards from him and he gave me his business card. I realized later that this was an ebay seller who I'd bought cards from quite a few times before.

Point is - this company just doesn't go to the card show in White Plains. In fact, I bet he doesn't profit much if at all from the card shows he does (he said he doesn't go to all of them). He goes to some because it probably helps to have that presence, but the cornerstone of his business is clearly online. That's someone who isn't living in the past, and is probably doing ok because of that.

That's probably the best 'Era Comparison' paragraph I will ever read. I was born in 1979 and I couldn't agree more!

NightOwl, may you be commended for your thoughts!

GCA said…
Instead of a basement show on a random weekend as their example of the state of the hobby, somebody tell CBS to come to Baltimore in August. I think they'll have a different impression.
April 3, 2012 at 8:09 AM

When cards were cards said…
I posted this same thing on Stale Gum and I will post it again, the piece maybe flawed but it's absolutely right. Baseball cards was and always will be something that kids were to have enjoyed but yes like everything it evolved into a greed driven business. If anyone can say this hobby is successful look at Upper Deck, and the non licence companies making cards. It's a joke yeah the 80's will never make a come back but at least at that time it was fun to collect, now it's like who can spend the most to have the ultimate collection
April 3, 2012 at 8:06 PM