April 19, 2012
(Happy birthday to The Simpsons. On this date in 1987, the Simpsons debuted on the Tracey Ullman Show as short lead-ins to commercial. Twenty-five years later, Homer, Marge and Bart are still cracking wise, although I stopped watching around 1993. Speaking of '93, it's Cardboard Appreciation time. This is the 139th in a series): 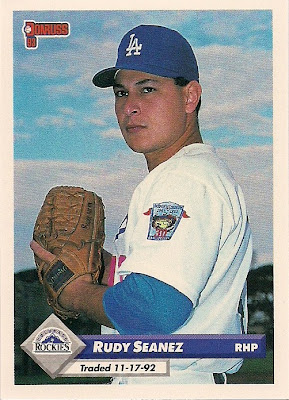 No one wants to admit that they need 1993 Donruss.

It's a sign of weakness. A desperate plea that could lead to derision.

You've started a new job. The manager shows you around and fills you in on the procedures and rituals of the position. You learn the computer system. You meet your co-workers. You figure out where the bathrooms are, the cafeteria, the snack machine. You know where to park, how to answer the phone, who to go to for a problem.

Months go by. Years go by. You're now a veteran of the company. You're showing other people how to do their jobs. People come to you with their problems and you solve them. They seek your advice, from how to approach a project to how to open a file on their laptop.

But there is one thing you don't know. You've never been able to figure it out -- or maybe you weren't paying attention for a couple of minutes during your orientation. It's haunted you for all these years, and you live in fear that someone who looks to you for help is going to ask you about it.

You've never learned how to load the printer with paper.

Oh, you've tried to learn. Every time you glance that blinking light on the machine -- signaling that it's out of paper -- and you sense somebody is about to fill the machine -- you try to run over there as quickly as you can to glimpse how they do it. But you've never been able to get there in time. There were a couple times that you rushed over so frantically that you got strange looks. So you stopped doing that.

But you can't ask anyone for a lesson on how to fill it. People come to YOU for help. You couldn't possibly, with all this experience, with all these years gone by, say to someone, "say, I wasn't paying attention 11 years ago, and I missed that lesson on how to load the printer. Could you show me?"

They'd laugh in your face. OK, maybe they wouldn't. But they'd try to suppress a laugh. That would be worse. Then they'd get on their Facebook page or Twitter and say, "You'll never believe who asked me HOW TO FILL THE PRINTER!" And then the texts would start, and then later, after hours, the discussions at the bar. There would be laughter then, for sure.

You'd probably get a nickname out of it. "Filling the Printer" would become a euphemism for going to lunch or making a phone call or, god forbid, something else.

So, no, there is no way you could admit that you didn't know how to operate a printer. So, when you really needed something printed, and that blasted light was blinking, you'd invent ways to get other people to fill the printer for you. Sometimes it would be a simple "since you're up ..." request. Other times, it would be a long, elaborate excuses about how you twisted your knee while trying to avoid a squirrel on your bicycle, and the doctor said to stay off your feet.

Finally, it's time for your retirement. The company holds a small party. There is cake and applause. You're asked to say a few words. You step up front, start to stammer, and then blurt out unexpectedly ...

And if this was real life, you'd probably be staring at bunch of faces looking at you with a combination of pity and scorn.

But this is the world of card collecting. And when you say something like that, someone always steps forward and says, "Sure, I've got some '93 Donruss. What do you need?"

No judgment. No piteous glances. No "I can't believe what he just asked me to do!"

The next thing you know, Smed is sending you the last 1993 Donruss Dodger that you need. It's one that you didn't know was part of the team set because Seanez is listed as a Colorado Rockie in the checklists. Which made you think, "Oh crap, I have to admit I need 1993 Donruss."

But really, I should know by now that there is never any shame in admitting that you need cards. This is blogging and this is collecting. Unlike that place called "work," we're all in this together. That has been demonstrated to me countless times over 3 1/2 years.

Thanks for not being work.

Play at the Plate said…
There is no shame among fellow collectors. Among our spouses, well that's a different story.
April 19, 2012 at 4:25 AM

Two Packs A Day said…
I bet you don't know how to use your company's real printers!

Those monster machines with lots of rollers and messy ink that miraculously feed, transfer ink, cut, fold, stack, bind and leave you with stacks of your work that people read and line their birdcages/litter boxes with. ;)
April 20, 2012 at 3:44 AM