Card show report, part 3: get this guy out of here 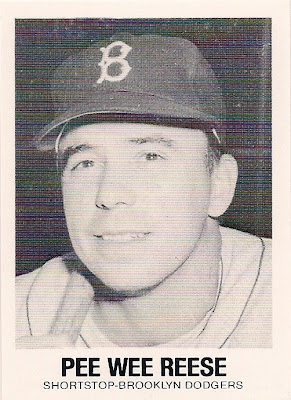 Like I said, I had to break the card show up into three reports. There really isn't anything great that I saved for the last post. I just ran out of time to get it all in the first two posts.

So no looking under the curtain. This is all I've got. I promise next show I'll stun you with some super sick shiny quintuple patch with 47 autographs on it. But for now, it's just leftovers.

When I last left off, I was pulling myself away from the quarter boxes. It was back to reality. I still hadn't found the cards that I promised two bloggers that I'd find for them. It was time to do some work.

I walked past a few tables, turned to my right, and there was a dealer that I've talked to many times. I never remembered him having so many cards as I was looking at right then. Usually he's a bit disorganized with random cards in boxes. I don't mind that, and all of his stuff is interesting. But this was a drastic change. He had all his cards neatly ordered, with some under those fancy glass cases.

And then I immediately found several rows of 1971 Topps. Just what I needed. He had everything there, even every high number that I scouted out.

I quickly grabbed the cards I needed for the trades and then went right to the discount box.

It was filled with cards from the late '50s to the early '70s, all in various states of disarray, but many in perfectly satisfactory shape. 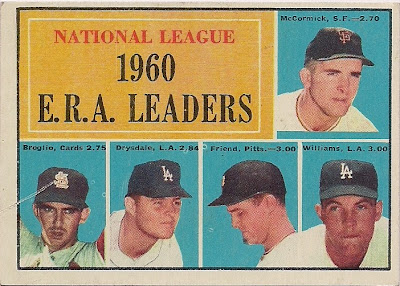 I grabbed the 1963 ERA Leaders card that you saw a couple of posts ago. And then I took this 1961 ERA Leaders card. These are about the ugliest league leaders cards known to man, with the horrible cut-and-paste images of players.

But I can't argue with two Dodgers on one card. Especially when it looks like they're conspiring to beat up the Giant up top. I think they're paying off Bob Friend to join in. 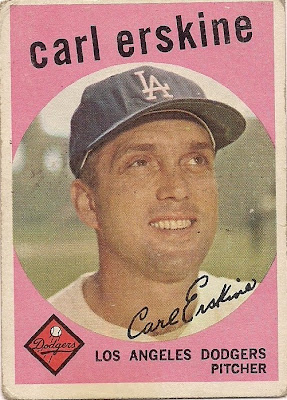 This was the only other Dodger that I found out of that box. It's a pretty good one and one I've spent too long pining over. I like Erskine and 1959 Topps a whole bunch. Add the fact that most of the Dodgers in '59 Topps have that terrible yellow background, and it's doubly great when one is a different color. Especially this very '50s pink color.

With that, I scrambled to the other side of the hall, to go to the dealer who always has the current cards for me.

The first thing I did was look for the 2011 Allen & Ginter binder. Nowhere to be found. I had to look desperate as I fanned through every one of his binders in hopes that the A&G set was snuck in the back somewhere.

But with that disappointment out of the way, I went right to the Bowman binder.

The thing is I know I always need Bowman Dodgers. I don't know which ones because Bowman makes it as confusing as possible. So I welcome a binder that includes Bowman, Bowman Draft, Bowman Chrome, Bowman Light, Bowman with Splenda and Bowman Fortified with Niacin all in one. That way, I can just grab random Dodgers that don't look familiar to me and KNOW that I don't have them already. 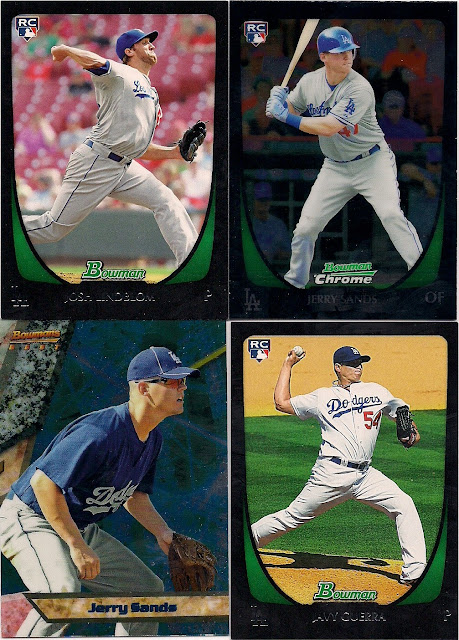 I think that's just about all of them. Not much, really. But by now I had sensed that there were CARS driving INSIDE the BUILDING. Dealers were tearing down their tables everywhere. I pulled out my phone and it said "3:30."

"Did they open early?" I asked the dealer as I tried to avoid being run over.

Yes, they did, he replied. But he thought it was unusual that people were closing up so early as the guy who runs the show usually is strict about staying open until 4.

But then he said, "I'm not closing up early. I don't care if I'm the last one here."

I went right for the 2012 Heritage binder. 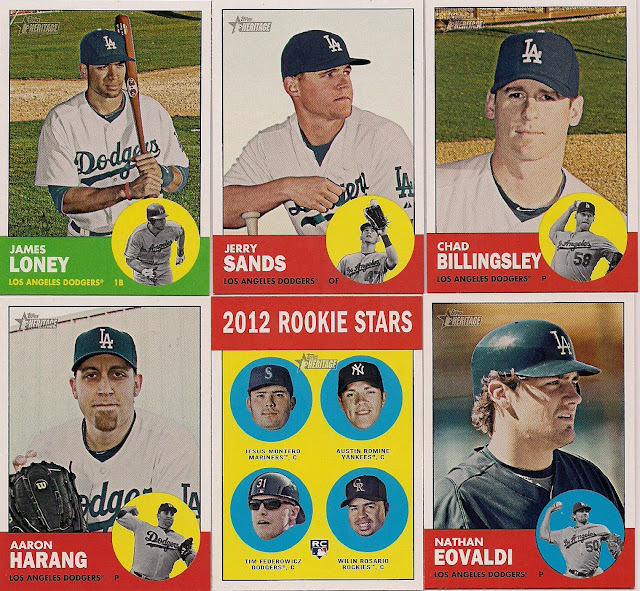 Those are all the non-short prints that I needed. I now have all the Heritage Dodger base cards, even those stupid multiple Federowicz cards.

I tried picking up the three Dodger short-prints, too. But by that time in the show, the only short-prints left were Marlins and A's (see? Nobody ever collects those teams).

So I'll just have to acquire those online or through trades. I certainly won't be buying Heritage packs in a bid for three short-prints.

After finishing off the Heritage binder, I turned around and scanned the hall, which is very big. I looked and looked and couldn't see a customer at all. Just a bunch of dealers trying to get out of the place like it was on fire. And me.

I, apparently, was the last guy stupid enough to want to pay these people. 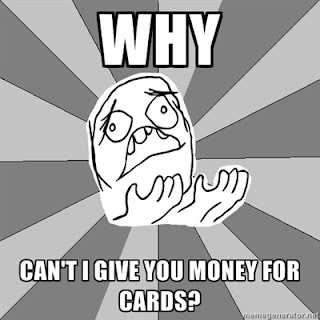 I started looking through a binder of faux vintage cards. But, instead, I just grabbed the TCMA Renata Galasso '77 Pee Wee Reese that you see at the top of the post, paid my money, and left the place before the bouncer caught me.

All in all, it was a successful show, even if I didn't get anything too flashy. I made my dollar go farther than I ever have at a show. And I've still got money in my pocket, which I haven't always been able to say after a show.

Now, it's time to catalog and sort. That'll take me a few weeks. At least.

Maybe I'll just buy one card at the next show.

Stealing Home said…
about that conspiracy to beat up the giant.. they probably chose to involve friend because broglio looks like he would take things waaay to far.
April 17, 2012 at 3:27 AM

deal said…
Always like Card Show Posts. love hearing the good, the bad and the oddball. Glad to hear you had a show that was so good it was warranted 3 postiongs. consider yourself lucky you don't have dime boxes....they are addictive and dangerous.
April 17, 2012 at 9:16 AM