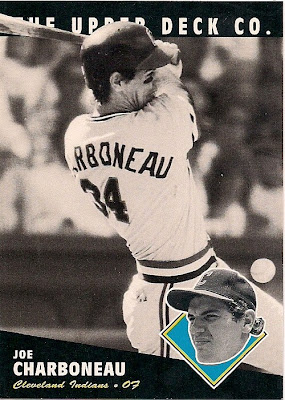 I'm afraid I'm going to have to split this card show report into three separate posts. I just don't have the time to scan all the cards and then write about them all in one sitting.

I'll deal with the first two-thirds of the show here and then wrap it up in the next post.

I mentioned that I arrived at the show late. It runs from 10 a.m.-4 p.m., but I almost always get there around 12:30-1 p.m. That's so I can avoid the big mob scene for whoever is signing autographs that day. (Yesterday it was former Syracuse great Floyd Little. I care nothing about SU, and yes, I know Little's history).

But this time I didn't get there until 2 p.m. Just collective laziness on our part, I guess (and the fact I have a 14-year-old kid in the house). After getting out of the car, I practically ran to the building. Once inside, my eyes shot to one of the two places in the hall where my favorite dealer usually stands. He wasn't at either place. I traveled the entire hall, with my head on a swivel, looking for signs of him. Still not there.

This has happened before. I'm sure he'll be back next time (the date was earlier this month, so maybe he had a conflict). But it wasn't helping at that particular point. I had practically promised certain people vintage cards in exchange for the few '71 Topps that I needed because I KNEW that this guy would have them. And now he wasn't there.

Fortunately, I found someone else who had some of the cards, so my reputation is somewhat saved. But before I found that guy, I was in near panic mode.

And then I saw it:

OK, so they're not dime boxes. I still don't think those exist in the Northeast. Even quarter boxes are pretty rare (I know they are rare because later I was at another dealer's table way on the other side of the hall and he was talking about how he didn't think he would make any money at this show because there was some guy selling all his cards at 80 percent off. He was referring to the quarter-box guy).

Don't let your stack spill over. Get rid of cable ... er, I mean, avoid quarter boxes.

But of course that's silly. I couldn't avoid these quarter boxes if I tried. Some sampling of what I found: 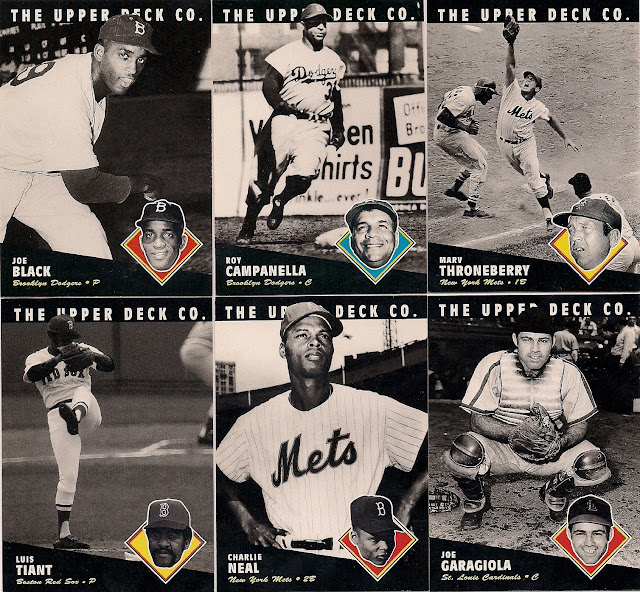 I should have grabbed all of these that I found and declared that I was collecting the set. But instead I found 2 Dodgers that I needed (maybe a third -- I don't know WHAT to do with that Charlie Neal card). I also nabbed the Marv Throneberry, because I really should have one in the collection. Also, Joe Garagiola of NBC's Game of the Week was a big part of my childhood, so I took that card, too. 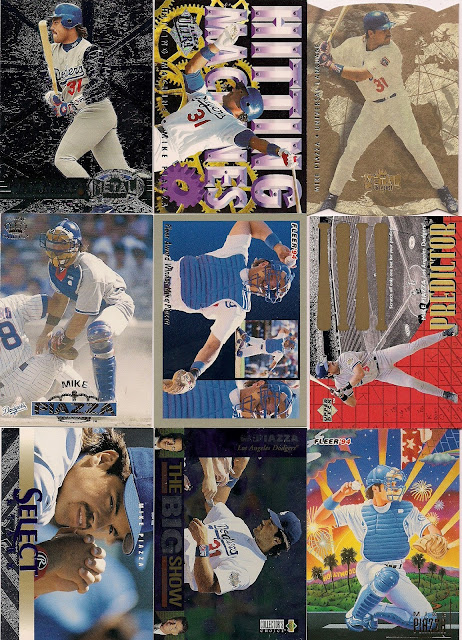 I'm convinced you can find Piazza cards in any discount box anywhere. These aren't even all of them. I even spotted one of him in a Marlins jersey, but put it back. 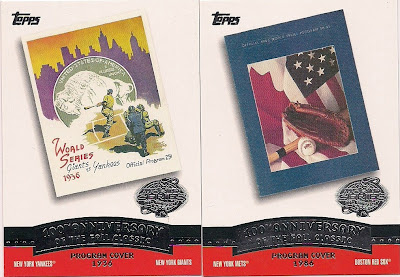 I love this insert set, featuring all the World Series programs. The goal is to get all of the ones in which the Dodgers played in the World Series. But I couldn't resist these. My brother -- the Red Sox fan -- owned the '86 program. 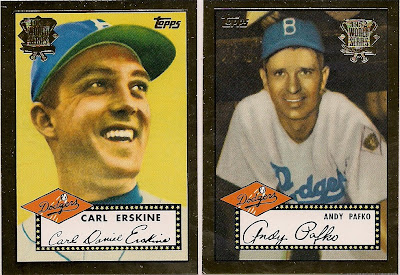 I probably have both of these cards already. I'll find out when I have time to look through my cards again. 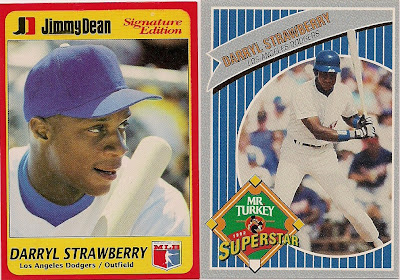 There are the Darryl Strawberry oddballs that I mentioned in the last post. Would it be crazy to get rid of all my cards except the oddballs? 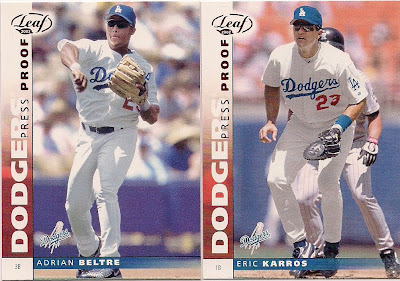 Pointless press proofs!!!!! But I can do pointless for a quarter! 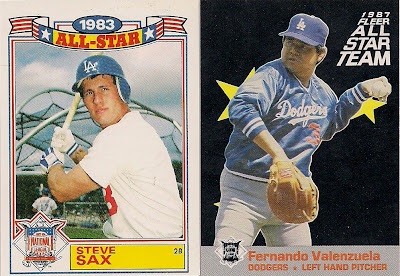 I still get mad when I find '80s Dodgers I still need. My brain thinks I should have all these by now. The Sax card wasn't even on my want list. Brain says "Sheesh." 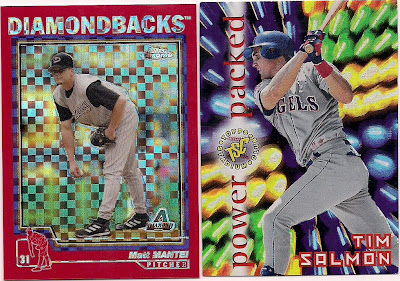 Sometimes you just get cards because they're so cool. Doesn't matter who is on them. I don't even know if I can trade these. Still grabbed them. 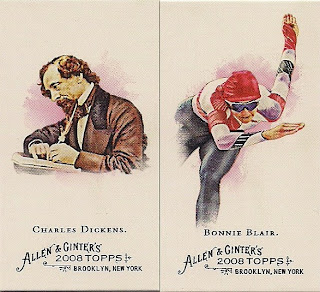 There were a few A&G minis in the boxes. A number of which I had already. In fact, I have the Bonnie Blair card already, too.

I find 1996 Finest confusing and ugly. Not two traits that you want to take to a job interview. But if you're offering your services for a quarter, somebody might take a chance on you. 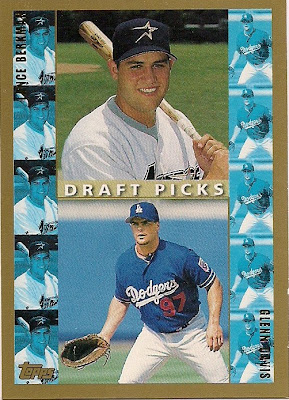 There is no telling how many more decades could go by without me realizing that there was a 1999 Topps draft picks card that featured a Dodger prospect. It's just this kind of card that reinforces that my job of collecting will never end. 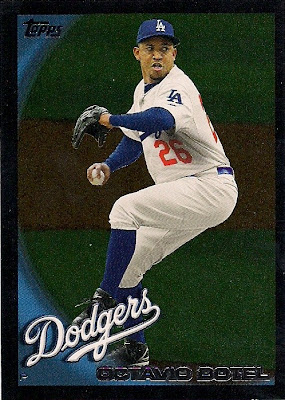 I found several of the Walmart black cards in the boxes. I only grabbed three or four. This was the only Dodger. Should've grabbed more. 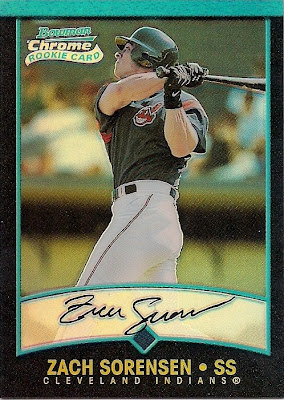 This card probably doesn't mean much to anyone who isn't an Indians fan. But Sorensen holds the honor of being the last player from the professional team that used to play in my town to make the major leagues.

I'm sure he mentions that every chance he gets. 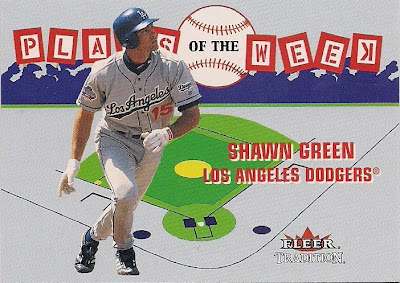 I love these early 2000s insert cards. The Dodgers seem to get deprived of a lot of these because card companies didn't deem the players on the Dodgers as insert-worthy in the late '90s/early '00s. Instead it's card after card of Yankees, Braves, Astros, Cardinals, Cubs and Giants. (I know. I see it in group breaks).

So this card seems extra special. 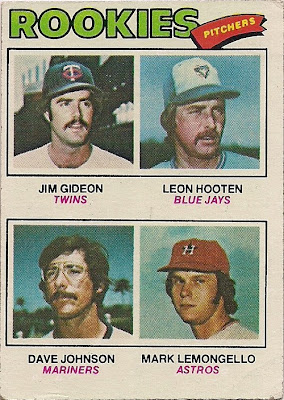 I didn't have this one. In fact, the last time I saw it, the four photos had been cut into mini cards by yours truly as an 11-year-old. 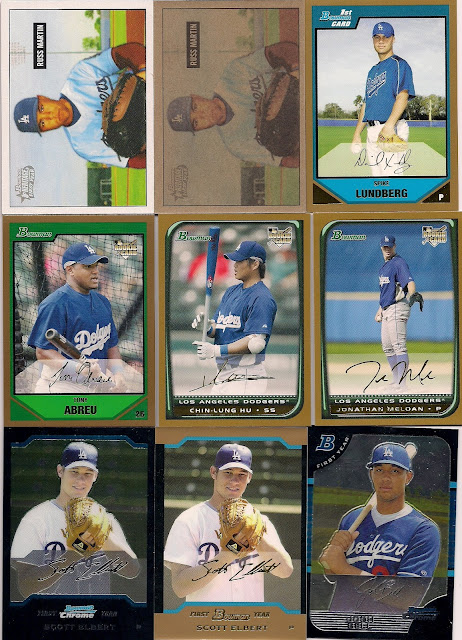 Discount boxes is where Bowman goes to die. There probably was more Bowman than anything else in these boxes. This is why no one should buy a Bowman card the year it comes out (unless they're going to resell it). The vast majority of the cards will just end up in a quarter box. 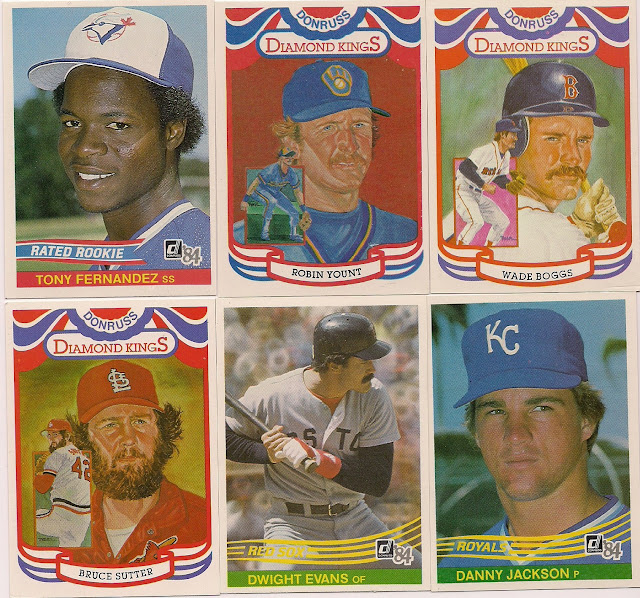 I was super-pleased to find 1984 Donruss in the boxes. It was the only time during the show that I called up my want list on my phone (sadly, no chicks noticed).

With seven more cards off the want list, I need just 30 more cards to complete the set.

As usual, I can't believe Dwight Evans is yet again one of the last cards I need. There must be a secret Dwight Evans Collecting Society somewhere. 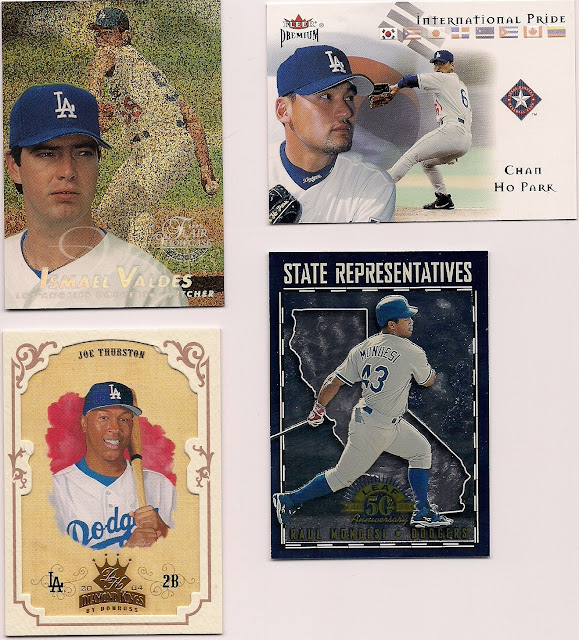 Finally, just some random Dodgers that I thought were cool. 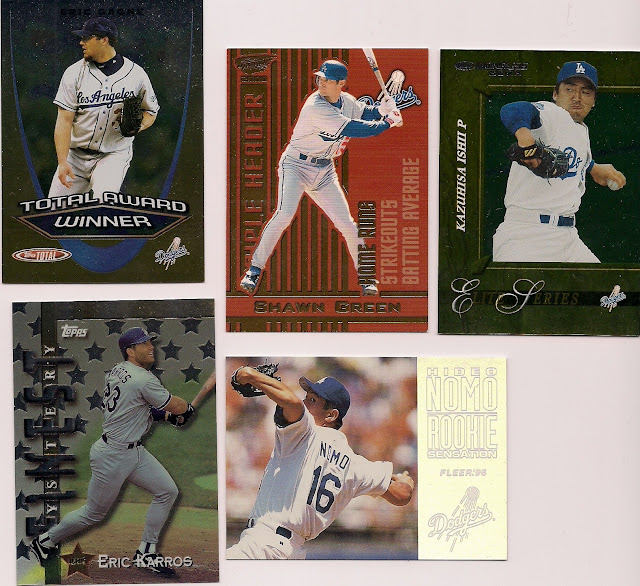 All told, I fished 102 cards out of the quarter boxes. I didn't even go through all the boxes. I forced myself to cut myself off so I could get to some other tables.

I spent more than an hour just rooting through the boxes, and it cost me just 25 bucks.

No, I didn't leave the show with any autograph cards, patch cards, or super-snazzy vintage. But don't complain.

I actually had cash leftover, which will allow me to send out trade packages three times this week.

(Coming up next post: both newer and older stuff).

gcrl said…
Nice haul. The manny mota from that ud set is similar to the neal. It has manny wearing an expos uni in the main photos.Still a dodger card, though.
April 16, 2012 at 8:00 PM

Nick said…
Ah, the joys of the discount boxes. (Thanks for referencing my blog, by the way.)

While the title my blog might suggest otherwise, I absolutely love the quarter boxes as well. (My last show was comprised mainly of quarter cards.)

I've got the same problem you have with the stacks falling over. My dad always has to come and straighten out the stacks when we're at shows because I don't notice how overflowed they're getting while I'm finding card after card.

And I've only seen one dime box since my return to collecting, at the closest LCS to my girlfriend's parents' house. Almost makes you want to live next door to the in-laws. Almost.
April 16, 2012 at 8:53 PM

BASEBALL DAD said…
Also, you probably already know, but there are two versions of the 1994 UD Greats set. The other has " Major League Baseball 125th Anniversary " imprinted in goldish copper lettering on the right hand side of the cards. The only reason I know this is that I have both versions in my Super Joe collection.
April 16, 2012 at 9:35 PM

Offy said…
When I say "Piazza" after finding something cool of his, it always comes out sounding like something Beavis would say. Pee-AH-tza!
April 16, 2012 at 11:40 PM

Josh D. said…
And you got a guy whose name is "Lemon Jello"!