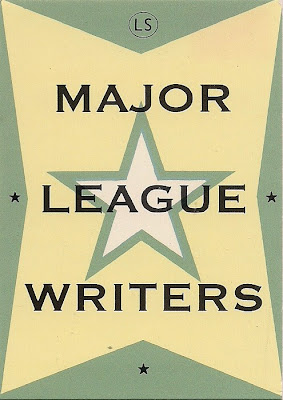 I was out of town over the weekend, visiting my folks.

Whenever I see them, I try to stop by an antique shop that is about 12 blocks away from their house. In the past, I would drive there. I walked there this time.

I like this particular shop because it doesn't sell musty old furniture and nothing else, like the one in my town. It features a wide variety of items. Just about anything you would consider collectible -- and some things you wouldn't -- you will see there. Even if I wasn't constantly on the prowl for baseball cards, I could spend a good hour or two there.

The card selection is never great. You have to hit it at the right time. In the past, they've had booths selling vintage from the late '60s/early '70s. But the last number of years, it's been mostly junk wax. I did find a box of 1995 Score a little while ago. And if I wanted, I could buy 1989 Fleer there all day. But, of course, I'd never want to do that.

The first item is a set I just learned about a few months ago. And when I heard the news, I knew instantly that I would have to obtain it or I would forever have a hole in my collection.

This set is probably of no interest to most card collectors. But I'm a writer by profession. And I've written about baseball. The greats in baseball writing are just as respected by me as any player. And, yes, I wish I could be them, too.

So, at this one small shelf, amid the Score rack packs from 1990 and the Topps Baseball Big, was a small, clear plastic case featuring a card on the top that said "Major League Writers."

Could this be the set I stumbled across a few months ago?

Back in 1990, someone was possessed enough to put out a 24-card set of baseball writers -- even though the chances of anybody being interested was slim. Yet, here it is, a set called "Little Sun Writers," and issued by Ball Four Cards. I think the set run was 5,000 copies. There's one on display in the Baseball Hall of Fame.

Here is the checklist: 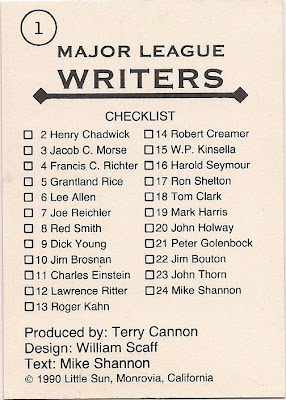 All famous writers, although there are some that I had never heard of before. Fortunately, the bios on the back are very detailed.

I'll show just a few of the cards. You'll recognize most of the names. 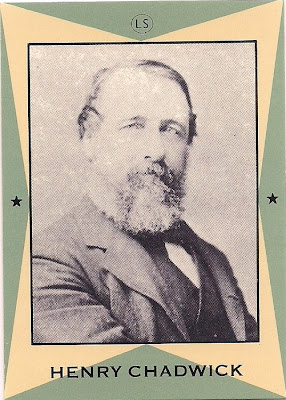 Henry Chadwick is like the father of baseball writers. He was a real advocate for the game. He devised the boxscore, simplified scoring and campaigned for greater coverage of baseball in newspapers. That's something we can all get behind. 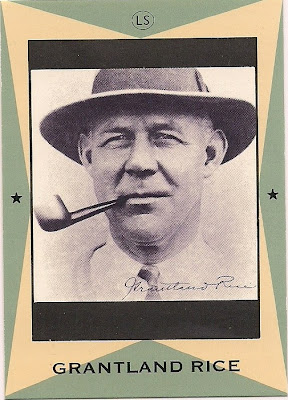 In dramatic lore, they are known as famine, pestilence, destruction and death. These are only aliases. Their real names are Stuhldrerher, Miller, Crowley and Layden ..."

Yeah, I know that's football. But Rice wrote about everything, for a long, long time. He was the sports voice of the people, and he spoke very well. 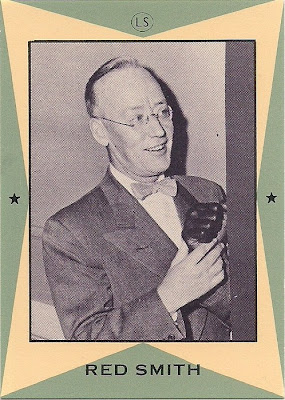 The first old-time writer I ever heard of was Red Smith. As I began to get interested in sportswriting as a young teenager, I picked up his "To Absent Friends" collection. I couldn't appreciate it then, and I believe my brother and I mocked his old-time writing.

Now, of course, I appreciate it for its time and his greatness. And his quote, "Writing is easy. I just open a vein and bleed," is one I can understand. 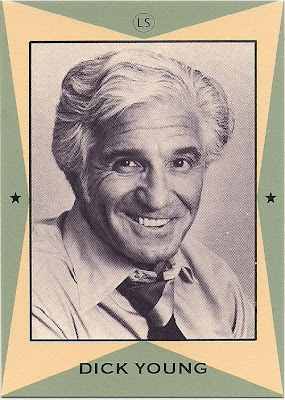 Dick Young was the first columnist I ever knew. He appeared a couple of times a week in the newspaper I delivered back in the early '80s. Every morning before heading out on my route, I'd absorb the daily paper and I'd read his column.

He railed a lot. I can't remember about what. Probably the Mets. Because of the time, I'm sure he was still ripping on the Seaver trade. 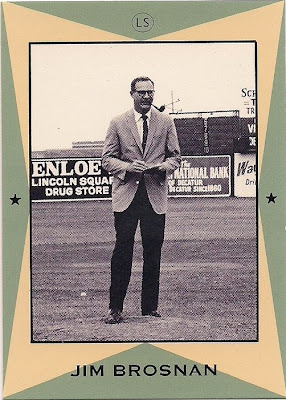 I had never heard of Jim Brosnan before I bought this set. Brosnan was the precursor to Jim Bouton and Dirk Hayhurst, a major league pitcher who became a critically acclaimed author. Brosnan's book was "The Long Season," a diary of his 1959 season with the Cardinals and the Reds.

Brosnan was a solid reliever for the Reds, but the team didn't like his writing and traded him to the White Sox. He soon scrapped baseball for a successful writing career. 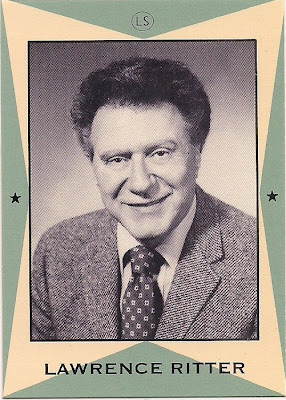 Ritter's "The Glory of Their Times," published in the mid-1960s, was the first book I ever read about early 20th century baseball. I'm sure that was an era that was in danger of slipping away until Ritter wrote his book, which was an instant hit. 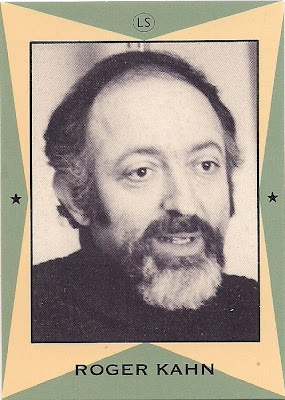 (Sadly, Angell is not in this set). 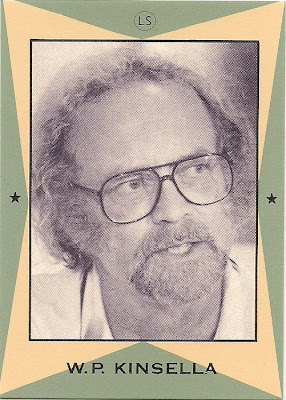 W.P. Kinsella's book, "Shoeless Joe," is the basis for the movie "Field of Dreams."

Talk about dreams. That's mine. Write a popular book that is turned into an ultra popular movie. A tip of the cap to Mr. Kinsella. 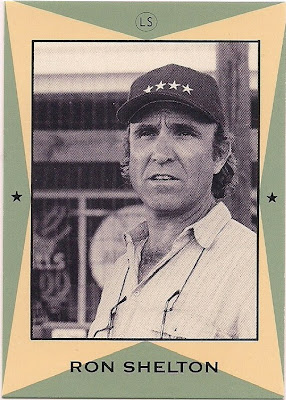 Another former professional baseball player, Ron Shelton was more of a screenwriter than a traditional book/newspaper writer. But his script "A Player to Be Named Later," became the move "Bull Durham," and his name is forever in lights. 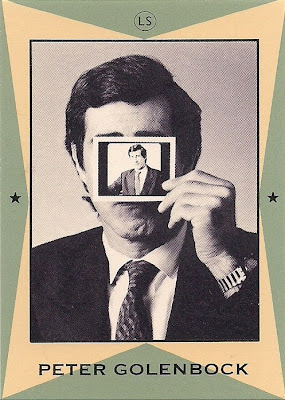 Peter Golenbock was hugely well-known during the era when I first became acquainted with baseball writing. He is the guy behind Sparky Lyle's "The Bronx Zoo," and Graig Nettles' "Balls," as well as other Yankee books.

But to me, his greatest book -- and the bio on the back agrees -- is "Bums: An Oral History of the Brooklyn Dodgers." I still remember reading this book -- hardcover version -- while down in the basement, curled up in a vinyl green '70s lounger, totally absorbed. Still have the book -- water damage and all. 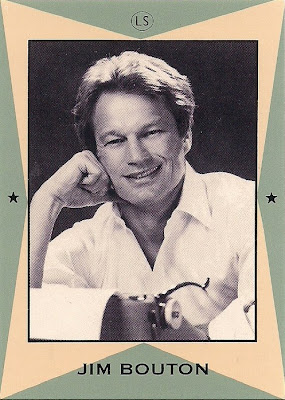 Easily the most popular card in the entire set. The author of "Ball Four" is a necessary addition here. Another book that I read -- wide-eyed -- while sitting on my bed in my room. I'm sure I had to fling it under the bed when my folks walked in.

There are lots of other writers covered in here: the authors of "Bang the Drum Slowly," "Total Baseball," "Babe: The Legend Comes to Life," and "It's Good To Be Alive," among others.

I'm still thrilled to have it -- a set that combines my two loves, baseball and writing.

Now if only I had as much time to read as I once did.

Paul Hadsall said…
I don't know how Dick Young evaluated the Tom Seaver trade, but he is generally credited for making it necessary.

Mark Aubrey said…
What a good looking card design. There's a reason some writers should be read and not seen. Thanks for sharing.
April 30, 2012 at 8:50 PM

Play at the Plate said…
What?? No inserts? No sticker autos? No game attended tweed jacket relics? No Bryce Harper?

J.Leavitt said…
I had the honor of playing softball in the '90s with the set's creator, Terry Cannon, who was kind enough to pass out a set to his "teammates". He is available at