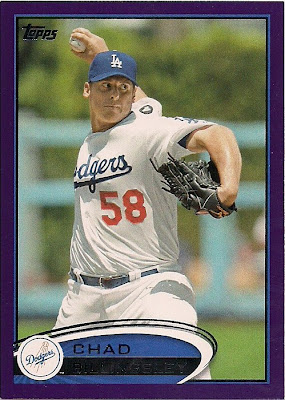 When my daughter was younger and still considered my wife and I as "desirable company" (as if she had a choice), we could not walk past a toy aisle or a toy store without her trying to strike up a deal so that we could wander among the toys for, oh, I don't know, about half a day.

In fact, the begging and pleading would begin long before getting near the aisle/store. It usually started as we were getting out of the car in the parking lot. She figured that if she started then, there would be multiple other opportunities to break us if the first couple tries didn't succeed.

During her occasional successes, she would eagerly attack each aisle with her eyes, no doubt wishing that she could consume about 70 percent of what was available on the shelves (the "boy aisle" disgusted her). Many times, we would have to demand that we leave the department immediately or I'm quite convinced that she would have figured out a way to set up a tent, grab some candy at the front register and just camp there all night.

During this time, she was on a perpetual quest that a Toys R Us would open in our town. I'm quite sure she wrote some letters to people at TRU headquarters, started a few picket lines and boycotts, and arranged a day trip to the various Toys R Us around the state.

Eventually. FINALLY. A Toys R Us appeared in our mall, replacing what my daughter had deemed as the decidedly inferior KayBee Toys.

But in a tragic "be careful what you wish for," genie-esque twist of fate, the store did not arrive until my daughter was no longer of the age when toy stores are the magic kingdom. I don't think I ever set foot in the Toys R Us, because she wasn't interested in anything in there anymore.

Today, at least one person in the family IS interested in something at Toys R Us. That person is me. Of course, it is baseball cards, and the purple-bordered inserts exclusive to the store that I have heard about for 2 or 3 years now.

However, in yet another twist of fate, the Toys R Us in the mall is no longer there. I think it lasted maybe two years before disappearing. I don't know how a national toy store chain does not succeed in an area with as many kids as this town has, but we are now back to the way things were six or seven years ago.

If I want to go to a Toys R Us, I have to drive an hour away. And, I'm sorry, the purple-bordered cards are just not that interesting.

Fortunately, other collectors live closer to toy stores, like Baseball Dad at All Tribe Baseball. He sent me my first purple-bordered Toys R Us card of Chad Billingsley. I don't know how he managed to get into the toy store without odd looks. We all know there are only three acceptable periods in life for spending more than 2 minutes in a toy store:

Right now I am between Stage 2 and 3, which means I never see the inside of a toy store. With all the screaming and carrying on that goes off in those places, it's not like I'd willingly go inside one anyway. But again, Baseball Dad must be made out of strong stuff.

He sent me a few other cards once he tore himself away from the toys. 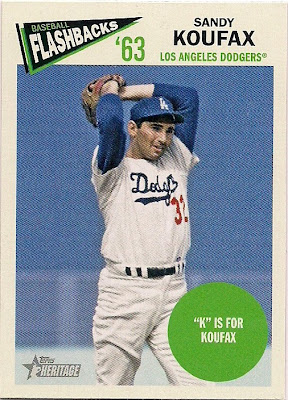 This is one of the many Koufax inserts in Topps Heritage. It's a good thing that Topps landed a deal with Koufax just in time for Heritage to cover the period in which he dominated baseball. Topps is sure working that for all it's worth. I guess this means we can see an agreement between Topps and Tom Seaver/Johnny Bench in about five years. 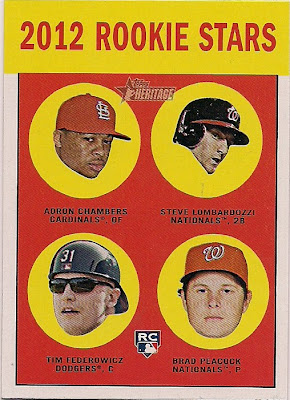 The less said about this the better. I think I need only three more Federowicz's for the complete set of Heritage Federowicz's. Geez. The guy isn't even playing in the majors. 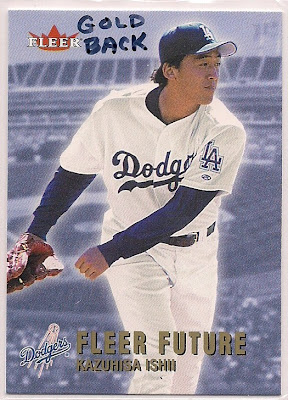 Baseball Dad was fortuitous enough to alert me to the fact that this was a "back parallel" by writing a warning on the penny sleeve. "Do NOT put this in your dupes box/stack/pile!" And, he's right to do so, because that is probably what I would have done. 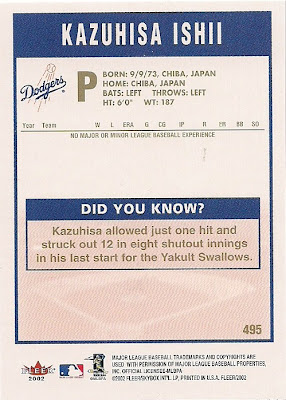 See? There's gold printing on the back. We supposedly cared about this in 2002. 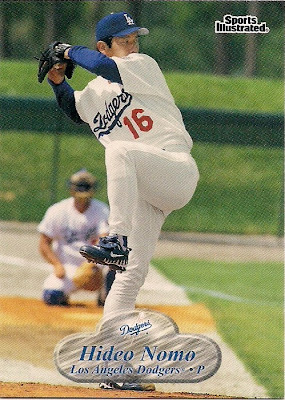 Finally, this is a Nebulous 9 need no longer needed. That Nebulous 9 has taken a few hits recently, which is always good.

I love this card because of the catcher in the background. How unnerved were American catchers when they first had to catch Nomo? "What the hell is the guy doing? Is he going to throw the pitch to third base?"

I will actually be traveling in the vicinity of a Toys R Us over the weekend. But I won't be stopping.

I will be tempted, but I'll just have to call up a few flashbacks and that will take care of that. Not even purple parallels are worth it.

1. I'm way behind on sending out some packages due to holiday, work insanity, personal issues, etc. I should be able to get some together and shipped out by the end of the week at the latest. Thanks in advance for your patience.

2. I haven't had a chance to begin the "Dodger Player of the Day" listing on the sidebar as I have the last 2 or 3 years. I'll get to it soon.

3. I hope all you Dodger fans enjoyed today's home opener. A 4 p.m. EST start is death for me. I was at work for almost the entire game (I had hoped to catch an inning during my dinner break).

EDIT: I did tune in on my dinner break, beginning with the bottom of the eight inning! Couldn't have picked a better time.

BASEBALL DAD said…
I'm nearly 62 years old and have enough grey,thinning hair to pass as a Grandfather,so I don't worry about what anyone sees me looking at.Unless it's my wife seeing me look at young chicks !

Glad you liked the cards. I have a really good trio for you next time.

Justin Drummond said…
I realize that the rookie classes for the early season releases can be a little thin so we're bound to see the same guys over and over, but I am still sad that Federowicz has like 5 cards in Heritage alone while current Dodger starter A.J. Ellis has none...at all...in any set.
April 11, 2012 at 2:29 AM

GCA said…
I've been in our TRU several times and have only seen cards for sale there once. Sometimes I think my town has old blue laws against more than one or two stores selling cards at one time....
April 11, 2012 at 9:13 AM