Sometimes you're better off not knowing

April 23, 2012
My wife announced Sunday that she and my daughter were off to Rite Aid to get some makeup supplies.

Now, whenever I hear the word "Rite Aid," only one thing comes to mind:

"The last drug store on earth that sells baseball cards."

OK, I realize there are other drug stores out there that probably sell baseball cards. But there were a lot more of them when I was younger. In fact, for the first, oh, 28 years of my life, the only places you could find baseball cards were drug stores and groceries. Every drug store sold cards. I could name a half dozen off the top of my head, and if you give me 5 minutes to think, I could name you about 10 more. It was just a fact of life. Open a drug store. Stock it with medicine, cigarettes and baseball cards.

But, now, I can name only one. Rite Aid.

So, immediately, I said, "they have cards there!" And I gave my wife some money to bring back a pack to satisfy my daily ripping urge.

Nothing really worth mentioning in either pack (the "vintage" cards were all from '79 and all dupes).

But I did get two Dodgers cards that I needed. That's always a nice surprise. I never expect to get any Dodgers I need out of those things. Especially since most of the cards seem to be of A's and Padres -- you know the cards left over after everyone has collected all the other teams.

But the next thing I knew, this card dropped out: 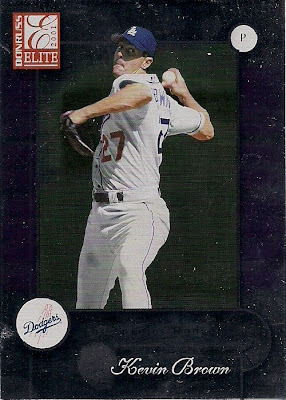 OK, it's Kevin Brown. But I don't think I have any 2001 Donruss Elite. So it did elicit an audible "cool" from me.

After shuffling through the usual Kmart cards, and '87 Topps, and a few gems that I didn't have already, I came upon this card: 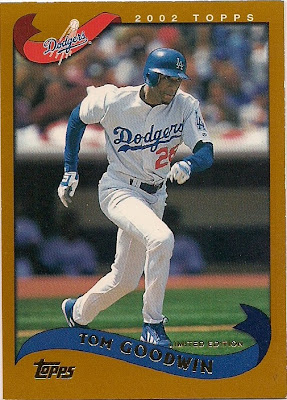 But something made me pause. I don't know how, as it's easily missed. But I took a closer look at the card, right down by Goodwin's right foot.

I don't know why this ever surprises me. I should enter the game automatically assuming that every set on the planet issued in the last 15 years has at least one parallel set if not a dozen.

But I had never heard of a 2002 Topps parallel set, outside of the usual Chrome, etc.

A quick bit of research told me that the 2002 Limited Edition set was similar to the Tiffany sets. And the cards were issued on thicker card stock.

I suppose it's thicker stock. It's kind of hard to tell.

I know I'm not crazy about trying to collect a whole team set of these things. It could be a long time before it ever appears on my want list. There's going to be a whole lot of bargaining and haggling going on first.

(By the way, I also pulled a Rockie and a Pirate Limited Edition card in case fans of either of those teams want to be haunted by another set to chase).

It's funny, about 2 p.m. Sunday afternoon, I was aware of only the sets that appear on my want list. It was bliss.

And then my wife had to announce she was going to Rite Aid.

Why couldn't that Rite Aid be like every other drug store in town and ignore cards?

hiflew said…
You know I want the Rockie. 2002 is one of the few flagship Topps team sets that I haven't completed yet, so why not try with a limited edition as well. I LOVE challenges!
April 23, 2012 at 2:06 AM