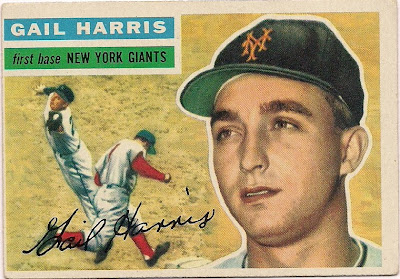 I'm having buyer's remorse over my last card show trip. It's not that I don't like the cards I acquired. They're all still wonderful. It's just that I can't believe I went to one of just three card shows that I get to go to each year and didn't purchase a '56 Topps -- which was at the top of my TO DO LIST.

I had promised to show two '56 cards this month to make up for none last month. But I was only going to do that if I had acquired two key '56 cards at the show. That didn't happen. But I'm showing a '56 anyway. It's one I acquired long ago, and it's another New York Giant. That's my punishment for striking out last weekend.

At least there is no way Gail Harris is retiring that runner in the picture. I've got that going for me.

Harris was a victim of circumstance during his five-year major league career. A power-hitting first baseman for the Giants and the Tigers, he won starting jobs, but never held onto them very long because competition was fierce back then.

With only eight teams per league, plenty of great players never received a chance in the major leagues. In fact, Harris termed himself "mediocre." But anyone who hit 20 home runs in a season, which he did in 1958, is not mediocre.

Hopkins landed the starting first base job with the Giants in 1955. But Bill White took it from him in 1956. Then, in 1958, Orlando Cepeda won the starting job and Harris was shipped to the Tigers. He had that one solid season with Detroit, and then Norm Cash took over the first basemen's role.

The frustration must have been too much. Harris finished his career in the Dodgers' minor league organization in 1961.

Of Harris' 51 career home runs, two stand out. The first came in 1957. It was one of two home runs he hit against the Pirates in a 9-5 Giants victory on Sept. 21st. Harris had four hits in that game and drove in seven of the nine runs.

The second of his two home runs -- hit off of Eddie O'Brien -- was the last home run ever hit by a New York Giant. The franchise moved to San Francisco the next year.

The other home run of note came at the end of the 1958 season while Harris was with the Tigers. Harris had 19 home runs for the season coming into the Sept. 25th game against the White Sox. Harris told White Sox catcher Earl Battey, a friend of his, that he really would like a 20th homer before the season was over. This was in the 9th inning of 6-1 game in favor of the Tigers. The next pitch from Tom Qualters was a fastball, and Harris redirected it over the right field fence.

He had told this story to his next door neighbor, a kid named Garret Mathews, who grew up to be a newspaper columnist. Mathews put that story and several others into a book called "Baseball Days." 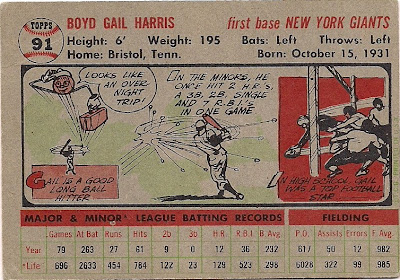 Harris is still kicking at 81 years old. His son, Mark, is a minor league baseball instructor.