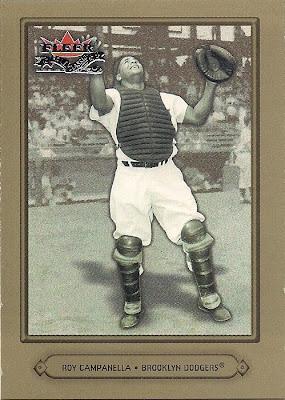 Yup, really. First one. Apparently you people who encounter pack searchers every other week live in areas with lawless card aisles. But our mamas raised us right up here.

But this wasn't the typical pack searching scene. And I apologize in advance for what I'm about to relay.

It's two girls. The butt crack girl is seated on the ground, doing terrible things to a pack of cards. The second girl is standing with a pack in both hands, and she's bending the pack practically in half, over and over.

Now, before you get too excited, A) these poor, poor girls, let's just say they enjoy their snacks; B) they didn't clean themselves up too well; C) the cards they were fondling were wrestling cards.

OK, I'm instantly sorry I shared that with everyone.

It's been a few days and I can't get the image out of my head. The things we go through for our hobby, huh?

Fortunately, that's all I had to endure. It's not like my blog turned on me like Chris at Nachos Grande. You may have noticed that he's back after what I thought was a week's vacation. Silly me. It turns out he was posting the whole time, but his blog wasn't updating on anyone's blog roll.

Now that is hobby frustration.

Right before his blog went into full sabotage mode, he held one of his many group breaks. I remain in a super selective state for group breaks because they've been mean to me the last few times. But I decided to try this out.

I didn't end up with a ton of cards I needed, but I did get a decent amount. So let's see them. 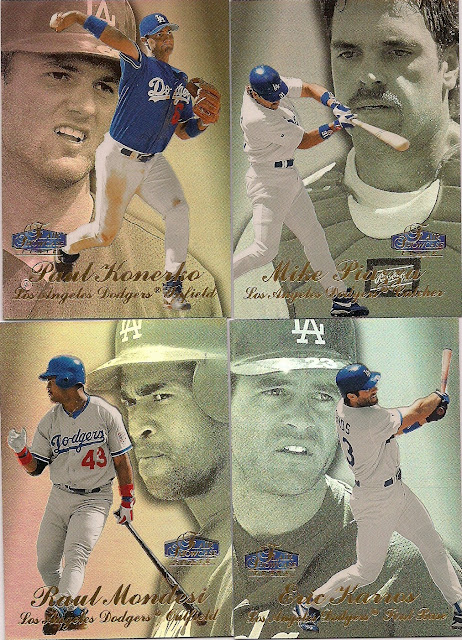 This is one of the reasons why I thought it would be safe to join the break. This is Flair Showcase from 1999. There are at least three versions of every card. I suspect there are even more and they're not telling us. So you could continue to collect this set for infinity.

These are cards from "Row 2" of the three available rows. Whatever. Yet, there are two different backs. One back is listed as Showdown and one as Showtime. I can't tell you how glad I am that I was not collecting in 1999. I would have been committed by now. 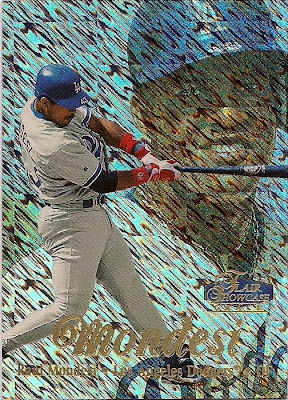 Here is the one parallel I received from the Showcase break. Apparently in '99 collectors were dying to see what their cards looked like in zebra stripes.

Actually, it's not as bad as on the scan. It's some sort of shiny, wavy effect. Totally unnecessary, but cool for the '90s, I guess. 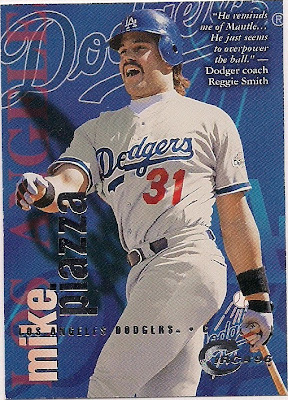 This is the only Dodger that came out of the 1996 Circa break that I needed. I was hoping to finish off the team set here, so that was a little disappointing.

I have a secret about '96 Circa that will cause you to question why you read this blog -- I mean besides the pack searcher story. But I'll reveal that later, when I'm in a particular self-loathing state. 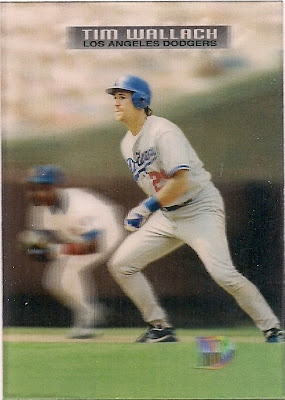 One card out of 1995 Topps Dimension III, too. But I think this was the last one of the Dodgers that I needed. ... I know that's not Harold Reynolds in the background, but that's who it looks like to me.

You would not believe what I just had to go through to get this image uploaded. Got to love internet hiccups.

Anyway, I did a little better with the 2003 Studio Dodgers. Here are three cards I needed. Funny, the same guy seems to be standing in the background of all three players! How did he stand there for so long? ... What? ... Oh ... It's a cheap studio backdrop, like at a photo studio? OK, I get it. 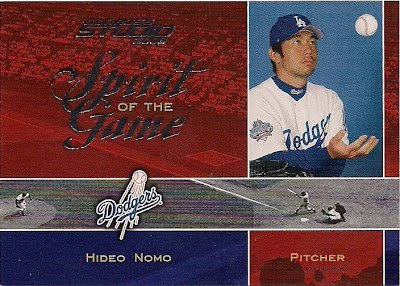 My favorite card from the break. It's a Hideo Nomo card. And it's a numbered Nomo card! 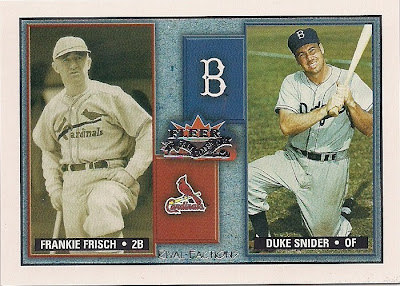 The Fleer Fall Classic break yielded just one base card I needed, the Campy card at the top of the post. But Chris threw in this Rival Factions numbered card, too! Like the Jackie Robinson-Larry Doby card that I have from this set, Snider and Frankie Frisch were never rivals. It even admits that on the back of the card! Yet Fleer pressed on with its nonsensical card. Way to finish the job, Fleer! 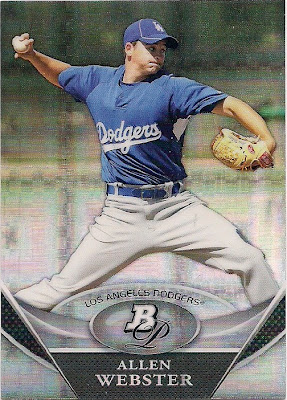 This wasn't part of the break at all. It came in a separate envelope like two weeks later. I'm not even sure why. But it's an xrefractor of a soon-to-be pitching star for the Dodgers. Welcome!!

So, that's my latest break experience. Worked out OK.

If you haven't joined his breaks, I would recommend trying a few. You'll always get stuff you need, even though breaks are always a risk.

In fact, now that Nachos Grande is back to being fully functional, I think he's got another break coming!

I'm not certain if I'll join yet.

I'm a little busy taking mental showers after that incident in Target.

hiflew said…
I'm pretty sure that is Shawon Dunston on the Tim Wallach card. From the background it looks like Tim is leading off second and the uniform looks more like a Cubs uni than any other.
April 3, 2012 at 11:13 AM

Spiegel83 said…
The Topps Dimension card looks sweet. The Nomo card looks like he is focused on becoming a juggler.
April 3, 2012 at 1:38 PM

Stealing Home said…
hiflew beat me to the punch, but thats my thinking as well. my first impression was dunston.

as for the nomo - juggla or not - thats an awesome card in my book.

Arno said…
Those are awesome cards. Love Flair! Do the mixed black-and-white and color photos bother you though? (From this post: http://nightowlcards.blogspot.com/2012/03/reason-for-my-irrationality.html)
April 3, 2012 at 4:19 PM

flywheels said…
What's it going to take to get the Owl in another break of mine? Give me some boxes you want to see opened that have the potential to yield something you want/need.

Nachos Grande said…
Glad you liked the cards - and I consider it a success that you got ANY Dodgers you need given A) How many Dodgers you already own and B) how great you are at trading for said Dodgers! As soon as I saw the Nomo I was hoping it was one you still needed! As for the other card I sent you, well, no real reason other than it was yet-another-Dodger that I pulled and you benefit from my malady more than anyone else.
April 3, 2012 at 11:58 PM

GCA said…
Was in my local Target a couple weeks ago with a friend and we made the requisite stop at the card section. There was guy there in a white shirt and tie casually molesting each and every rack pack of some Panini basketball they had. He didn't look at us, and didn't stop at all until he had checked every one, then just walked away into the store. Kinda wanted to just taser the guy and throw him into the parking lot, but just shook my head and let it go. My friend is not a collector, so I explained why it was so pathetic to me that the guy was spending so much effort searching for $3 jersey cards...
April 4, 2012 at 9:17 AM