Once upon a time, when I was 10 years old, I knew just two Jewish kids.

The boy was a jerk. I disliked him more than any other kid.

The girl was quiet and pleasant and liked horses. I liked her.

I found each of them very unusual to my 10-year-old Christian way of thinking. I never saw them in church on Sunday and they would disappear from school on days when everybody else was there.

Then, that same year, I read a biography on Sandy Koufax. He was the first famous Jewish person I ever came across. I took an instant liking to him, and even at a young age, admired his principles when he declined to start Game 1 of the 1965 World Series because it fell on Yom Kippur.

I looked at the Jewish kids I knew with a different perspective. Except Sheiman. He was still a jerk.

As the years went on, people of the Jewish faith moved in and out of my life so often that I never thought about it the way I did as a youngster. In fact, focusing on their religion seemed silly.

One of the best employees I ever hired was Jewish. I would make arrangements for him so he wouldn't have to cover games on Rosh Hashanah or Yom Kippur. He was phenomenal at his job and committed to his faith. If anyone was a Superjew, he was it. 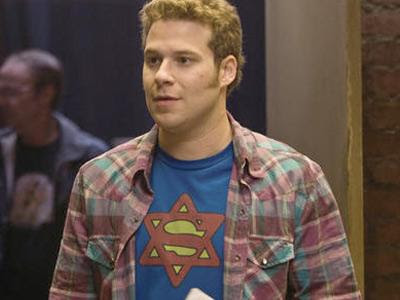 Sorry, Ira Wright. He was it.

Except that there is already someone who owns the nickname.

The Original Superjew was a power-hitting first baseman, who received the name from manager Rocky Bridges in the minor leagues. Bridges watched Epstein tear up the league and promptly dubbed him "Superjew." 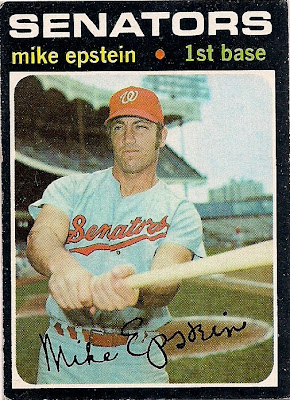 But that was Mike Epstein's nickname. And this is his card from 1971.

Just the other day, Superjew came home to my collection.

It's a high number. It came from GCA. It's also the penultimate card in my quest for the complete 1971 Topps set. In other words, there is only one card remaining for me to have a COMPLETE VERSION OF ONE OF THE GREATEST SETS OF ALL-TIME.

(Now don't get all completist on me. I know there are variations in this set, but I don't care. Having cards 1-752 from a 41-year-old set that is notoriously difficult to complete is pretty damn awesome, I also don't have any plans to upgrade the cards equally notorious for their chipping. I repeat, a set of 1-752 is unbelievably awesome).

After Epstein, all that's left is a card of Roberto Clemente.

You'll never guess its origins. Well, maybe you will as I left a hint a few posts ago.

At any rate, when I get it, that's going to be one heck of a post.

Might want to brace yourselves right now. The party is going to be big.

William Regenthal said…
Great story. The one Jewish kid I've known the longest was also a jerk, but he has grown on me over the years. Still kind of a douche at times, but he's harmless. The story made me think of him. I, too, am working on the 1971 set, but I'm a lot farther off from completing than you are. Congrats!
April 18, 2012 at 8:36 AM

CaptKirk42 said…
Growing up I knew a lot of Jewish kids, partly because the neighborhood just next to mine a few blocks down the street is nicknamed "Little Isreal" because of the high Jewish population. It always had a big Jewish population it seems, but was increased ten-fold when a synagogue was built by a small shopping center that was about 3/4 of a mile from my home. As a Senators fan from old or a Nationals fan that remembers the previous Homie Team I am also a fan of SUPERJEW.
April 18, 2012 at 10:26 AM