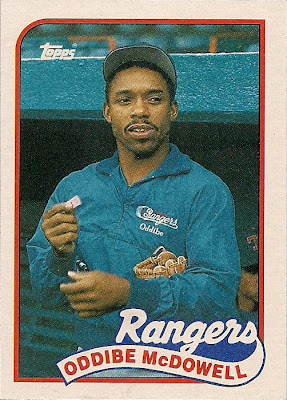 That is what Oddibe McDowell appears to be offering. And if he were offering it to me, in April of 2012, I would have to consider a few questions first.

But what I would probably say instead is, simply:

And I would leave the rest of the thought out:

I was diagnosed with diabetes last month. It's the big health news that I wrote so cryptically about, first because I didn't know what the hell was going on, second because I didn't want to believe it, third because of stress and frustration and anger and disgust and fear and worry and just way too much in an already preoccupied mind for me to want to deal with something like this in writing.

But since we are all sharing, I figured it would be a little selfish of me not to do so as well.

I don't know how long I have lived with Type 2 diabetes. I was one of those guys who didn't go see his doctor. But I figured I was still young enough where that wasn't a big deal. But here I am, at age 46, dealing with things that I never wanted to think about when I was younger.

Diabetes runs in my family although not on a big scale. So it's always been in the back of my mind, but not a major concern. I lived about 20 years of my life being overweight and when I set out to lose weight five years ago, I figured that had taken care of many future potential health issues. Lucky me. It didn't.

I kept drinking the soda, and craving the desserts, and while I didn't eat what most people would consider an extraordinary amount, it was still too much for my body.

I am in the early stages of this -- at least I think I am, nobody knows for sure. So there are none of the common tools that you associate with diabetics -- yet. But there are definitely some of the symptoms.

I have become a big believer in natural healing, and although medicine helps a great many of diabetics, I've read some bad stories about diabetes medicine, too. I've decided -- for now -- to go the natural route, with supplements, healthy diet and exercise (my parents -- both in their 70s -- have led healthy lifestyles for 40 years and if you saw how young and active they are, you'd be an instant believer).

The jury is still out -- it's only been a month since the diagnosis, you know -- and there are still almost daily concerns. Lots of uncertainty, lots of research, lots of conflicting information, lots of panicked moments, lots of prayer. I don't know where all of this will lead, and that is why, I think, I was so reluctant to put it down on virtual paper.

I have not eaten anything with more than a couple grams of sugar in a month. Didn't even touch my daughter's birthday cake and ice cream. I don't really miss that stuff (although I did dream last night -- to my horror -- that I downed a bottle of Coke).

I'm starting to find support in others and I'm sure that support will grow as time moves on.

My hope is that I will be a testament to the wonders of healthy living, and live a full life for years to come.

My hope is that I'm not too late.

There's a lot of work to be done. I'm trying not to think too much about it.

I'll work on that. I'm working on a lot things.

"No thanks. I have diabetes."

Play at the Plate said…
First of all, thanks for sharing your story. I hope you get it under control and manageable. There really is no second if all, just the thought that I need to change some things or in headed there too. Best of luck and since I am the praying type, I'll pray that you stay in control and I know you speaking out will affect a lot of people in a positive way.
April 12, 2012 at 9:27 PM

Robert said…
Greg, you've given me pause to think about myself and my battle with weight. All that, from a piece of gum...

Thank you very much for sharing, I could see in your posts for the last while that you've had a lot on your mind. My prayers will be with you as well.
April 12, 2012 at 10:46 PM

arpsmith said…
I wish you the best and appreciate you sharing your story. I am about 5 years younger than you and working on the weight as diabetes runs (a little) in my family as well. I am confident that if you stay with your healthy ways you will be able to do well in your battle. Best wishes.
April 13, 2012 at 12:31 AM

carlsonjok said…
Although I am not diabetic, I have been trying to cut sugar and high fructose corn syrup out of my diet. I have been feeling a lot better since I have done so.

Orioles Magic said…
I know it has to be tough to divulge such personal information. My aunt was recently diagnosed with diabetes too. Good luck with the adjustment and thanks for sharing your story!
April 13, 2012 at 3:25 PM

Hackenbush said…
My Dad was diagnosed with diabetes probably around the same age as you are now. He was on daily insulin but he did just fine. Of course he didn't live to see the Cubs in the World Series again but I may not either. I wish you the best. :)
April 13, 2012 at 9:55 PM

EggRocket said…
Sobering news N.O. I wish you the best. I'm glad you were able to take off the weight. That's only going to help you in the long run. You'll get good support when you identify the community.
April 14, 2012 at 4:03 PM

Community Gum said…
Thanks for sharing your story.
My brother has flirted with diabetes, and that alone has scared the crap out of me. I can't imagine what it must be like living in your shoes.
I can't say I have any advice, but I don't think I'm exaggerating by saying that everyone here is with you and we'll all support you in any way you need.
--Jon
April 15, 2012 at 6:56 PM

Doc said…
Thank you for sharing, and I am glad that you have an answer. Most definitely not the answer you wanted, but you have a direction now.

I've been having troubles of my own for many months now (hence the absence), and I finally broke down and made a doctor appointment for tomorrow morning.

I'll keep you and yours in my prayers tonight.