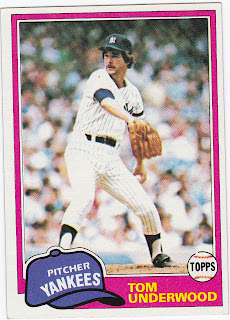 This post is dedicated to my early days of prospecting and the late, great Tom Underwood. Underwood died last week at age 56 after battling pancreatic cancer.

The news stopped me for a moment because just last week I had pulled Underwood's 1976 Topps rookie cup card while looking for cards to feature on the "Top 60 Ever" posts. How freaky is it to look at a card that you haven't viewed in a year or two and find out that the player had died that same week? That still floors me.

I thought Underwood was going to be a great player in 1976. I had no idea what prospecting was then. Nobody did. But I kept that card under a close eye, because he was going to transform the Philadelphia Phillies pitching staff into something epic. Steve Carlton, watch your back, because a new ace was in town.

That never happened. Underwood had a respectable career, but he wasn't an ace for the Phillies, or the Cardinals (horrible airbrushing job in '78 Topps), or the Blue Jays, or the Yankees, or the A's, or the Orioles.

Actually, there was no way for me to know whether Underwood would become a star. We didn't have the internet or Baseball America or Bowman or anything really to help us figure out how to project a career. All we had was a rookie cup.

Anyway, before this gets all Cardboard Appreciationy and I forget I'm supposed to be featuring the 1981 set, here's Underwood's card back from '81: 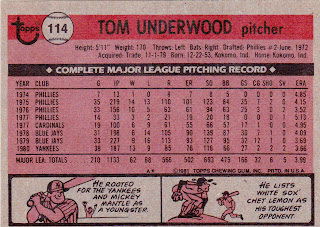 In many ways it is your basic card back of its time. But 1981 Topps sets itself apart in two ways.

First, it added a few more columns of stats for pitchers. Stats for games started, complete games, shutouts and saves were all new in 1981. For years, the traditional columns for pitchers were G, IP, W, L, R, ER, SO, BB, ERA. So this was a significant addition. 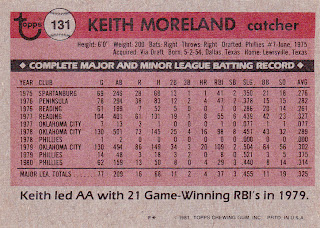 Topps also added four more categories for hitters. Stolen bases, slugging percentage, walks and strikeouts were all new (I was always frustrated as a kid that Topps cards of the 1970s did not feature stolen base stats).

Topps would stay with that same stat configuration for both hitters and pitchers for the next 23 years, until making a change in 2004 by adding OPS for hitters and WHIP for pitchers.

Below the stats, you'll note the brief write-up on the bottom of Keith Moreland's card. Fascinating, isn't it? That's one of the drawbacks of the '81 Topps set. It would feature cartoons for players who didn't have long careers, or at least not a lot of minor league stats, but merely a sentence write-up or nothing at all for those with a bunch of stats. That's a big card back countdown no-no.

But for the cards that did have cartoons, the collector was in for a treat. 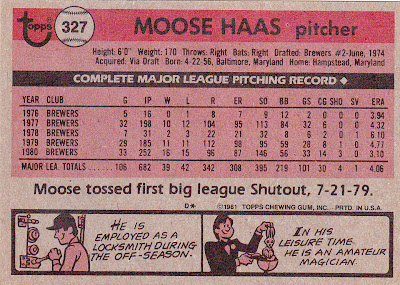 For me, the 1981 set marked the end of the golden age of Topps cartoons. There were some cartoon in the '82 set, but they were very sporadic and dull. After that, there was nothing until 2006.

But the 1981 cartoons contained multiple features that I enjoyed. One of them was that there were two cartoons for each card. That was something that hadn't been employed since the 1960s. And I particularly enjoyed it when the cartoons were related to each other. 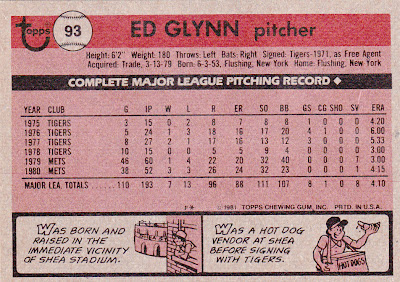 Ben Henry from The Baseball Card Blog devoted several posts to the 1981 cartoons a couple of years ago. I believe this one was one of the finalists in the tournament he held. 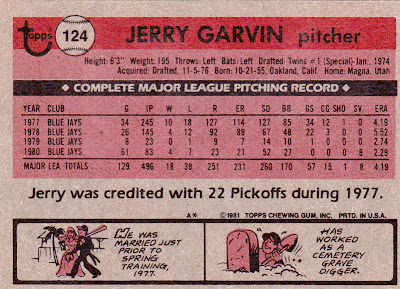 The combination of these two cartoons is mildly disturbing.

The other thing that I like about the cartoons is that Topps seemed to get a lot of good information from its player surveys in 1981. Here are my favorites:

My all-time favorite is the last one. I'd have you guess each of these but I doubt anyone would get more than two or three. So here's the order from top to bottom:

I love the tone of the Pocoroba cartoon: "No, really! His parents actually named him that! Really! It's true!" Also, I suspect Bob Davis was pulling Topps' leg.

I must go with The Kid. 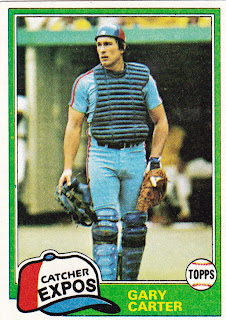 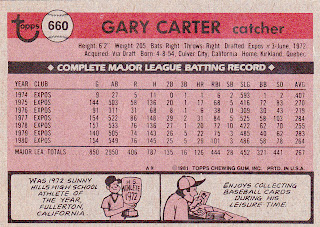 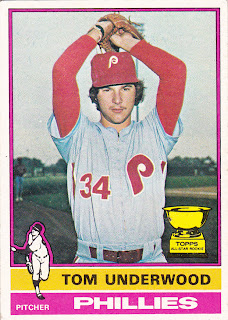 Play at the Plate said…
RIP Tom. My uncle died after a brutally painful battle with pancreatic cancer and that's no way to spend the last days of your life.

Now...for the upbeat part of the comment. 1981 was my "birth" year as a collector so it's always been special to me. I love the Glynn cartoon. It makes it sound like a scout saw him throw a dog across the aisle and signed him on the spot.

Can you imagine any ballplayer now with a cartoon about their offseason job? Right! If you spent any time as a gravedigger or a hot dog vendor, I guarantee you didn't take a shot at playing baseball for granted.
December 1, 2010 at 7:39 AM

deal said…
This post reminds me of something I have been wanting to mention - I was buying packs at my Target This past summer and the girl working my line told me that Moose Haas was her uncle - she was shocked when I told her I remembered him.
December 1, 2010 at 8:30 AM

Kevin said…
I hadn't heard about Tom Underwood. This hits home - as a child I owned exactly four 1982 Topps cards, and Tom was the only non-Oriole of the bunch. It was something of a surprise when I learned years later that he had been an Oriole in the mid-80s. RIP.

My best friend's father used to play softball with Moose Haas, presumably after his major league days were through.
December 1, 2010 at 8:45 AM

Don said…
I also had not heard about his death. My best memory of Tom was when his brother Pat was called up to make his debut against Toronto. As a kid I knew that Tom pitched for the Blue Jays and thought that it would be cool if they pitched against each other that night. I watched that game and it was a good one, ended 1-0 or something like that.
December 1, 2010 at 9:26 AM

Bo said…
I looked up Bob Davis and snake-hunting and found this great Baseball Digest article from 1976 about players listing their hobbies in the Baseball Register. If Davis was joking about the snakes he had been doing so for a while.
http://books.google.com/books?id=XTQDAAAAMBAJ&pg=PA86&lpg=PA86&dq=%22bob+davis%22+snake+hunting+baseball&source=bl&ots=mund2YbrA6&sig=zV5vjRW8iU0_w027SwWsQnHH544&hl=en&ei=HW72TPzzBoOglAfq7cXdBQ&sa=X&oi=book_result&ct=result&resnum=1&ved=0CBMQ6AEwAA#v=onepage&q=%22bob%20davis%22%20snake%20hunting%20baseball&f=false
December 1, 2010 at 10:51 AM