A half-hearted look at the worst cards of 2010 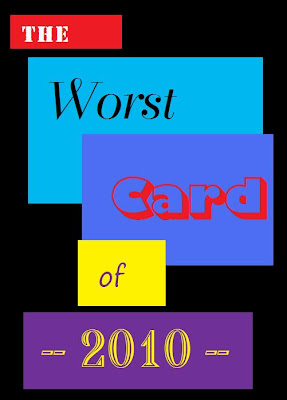 I admit that I put as much effort into finding the worst cards of 2010 as I did in creating this graphic (yes, I design sports sections for a living).

But it's not all my fault. Once Upper Deck left the arena, that left half the amount of cards that existed when I did this the previous time. It just wasn't that fun pitting Topps against itself.

Also, I cut back quite a bit on buying current cards in the past year. There were a number of sets that I just didn't bother with, beyond opening one pack. That means that the candidates for this year's award may not be a fair representation of what was out there.

If my collecting pattern continues, there won't be a "worst card of 2011" -- at least from me anyway -- because I have a feeling I won't be purchasing many 2011 cards at all in comparison to the last four or five years.

I'm such a Bob Bummer.

But before I take all the fun out of being negative, let's get another look at the candidates for this year's big steaming pile of card poo. I've added one more card to the original list of five. So there are six candidates, which is fair seeing as there were about half the cards that there were last year. 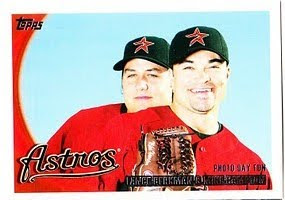 Is Photo Day supposed to make me want to run away screaming while protecting my genitals?

I didn't think so. 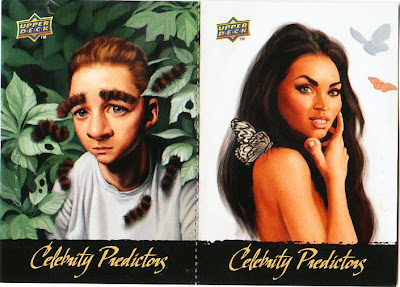 2. Upper Deck Celebrity Predictors, Megan Fox and a guy whose name I can't remember but I know it sounds vaguely feminine.

I know some people will disqualify this because it's technically not a baseball card. But it did come out of a baseball pack, so it's here to be ridiculed. 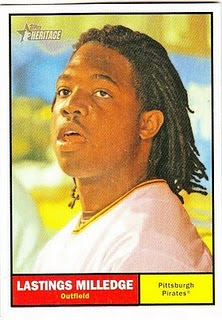 If Mr. Milledge isn't insulted by this photograph, I'm insulted for him. 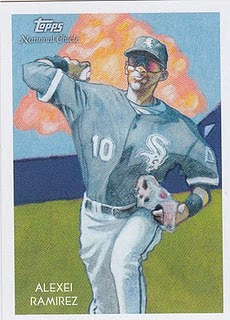 Ramirez is a one-man Gas House Gang in this photograph. Notice there are no people in the background. That's because they've all been overcome by the noxious orange cloud. It's carnage just behind the blue fence. Is this the new uniform for American Airlines skycaps? If not, you could have fooled me. There is only one word for this card and several similar versions in the Update set: abysmal. 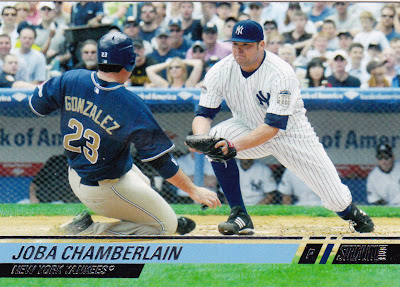 That brings us to the sixth and final candidate. You likely know where I'm going with it. This is a Joba Chamberlain card from 2008 Stadium Club. 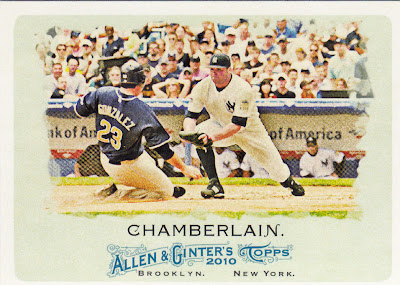 And here is that same photo, Allen&Ginterized. I know some folks cite the Albert Pujols shot when complaining about repetition in 2010 A&G, but at least the Pujols shot is a different photo from the similar '09 Topps base picture. This is the identical Joba photo.

Plus, it's not like the original Stadium Club card photo wasn't memorable. It was a great shot. Did Topps think it was fooling anyone? I doubt it. They just didn't care.

The candidates for the Worst Card are listed in a poll on the sidebar. Yes, that means I have four polls going at once.

That has to be a record, right?

Please tell me it is. I need to feel like I accomplished something tonight.

The best cards of the year are coming up tomorrow.

Cardsplitter said…
2010 Chicle Yaz is the worst card of the year.

Anonymous said…
I gotta go with Votto Chicle as a write-in candidate, but not the overall winner (loser?)...that goes to the Photo Day Fun card.
December 29, 2010 at 11:09 PM

beefman said…
Berkman and Hampton look like they're in love. Certainly the worst card of the year! Possibly, the decade...
January 4, 2011 at 10:40 PM