Will this card exist or not? 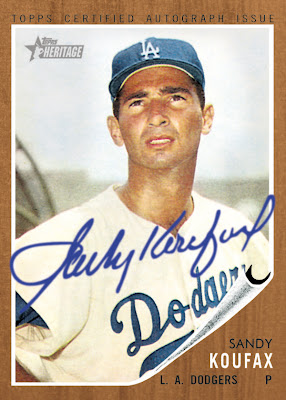 A couple of sites announced yesterday that Topps had signed Sandy Koufax to an autograph deal  for the 2011 card season. Autographed cards of Koufax -- ON-CARD autographs -- would begin appearing in 2011 Topps Heritage, and then later Topps products.

A mock-up from Topps on what the Heritage card would look like later appeared, according to at least one site. It's what you see on this post. It looks awesome.

While trying to do as minimal research as possible, I attempted to go to the source of this news, the Beckett Blog. But every time I clicked on a link to the story, I was met with a blank page on the blog. Even Chris Olds' twitter link to Beckett's Koufax story gave me page not found.

The Topps Twitter page doesn't mention the Koufax news at all. I think it had mentioned it earlier in the day (I have been on Twitter only sporadically lately). Someone retweeted Topps' mention of signing Koufax to a deal, but that actual tweet is no longer on the Topps site. Topps did post a twitpic of the card.

Will this card exist or not?

If it will, I am thrilled and all. But I am realistic in saying I have no shot at this card. There is no way I am rich enough to buy it. And I am not even close to being lucky enough to pull it. I have never pulled anything hit-like out of Heritage ever. Never ever ever. Not an Angel Berroa autograph. Not a Felix Pie jersey scrap. Not a Kendry Morales jock swatch. Nothing.

Pulling a super sweet autograph of one of my 3 favorite players of all-time, the subject of the first baseball biography I ever read in fourth grade, a player I can identify with for his left-handedness and his unwillingness to embrace the spotlight, would be basically the last act of my collecting life, because how could I possibly get that incredibly lucky ever again.

But it's not going to happen. Some mojo man will end up with 5 versions of the Koufax auto and cause me to vomit all over my keyboard.

So, maybe it's a good thing if the card isn't going to exist.

Whether the card actually will exist or not, I'm sure my life will be the same either way. 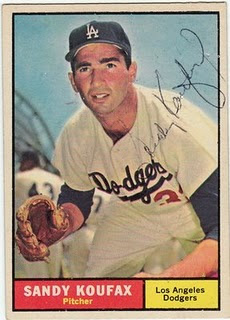 (But really, what's the deal?)

Me: @toppscards Care to enlighten why yesterday's mention of your 2011 deal with Koufax has been removed in a few key places?
@toppscards: Unfortunately, I can't.

Play at the Plate said…
Here's the deal. Topps, upon hearing the blogosphere was abuzz with excitement, promptly destroyed all the Koufax autos. They will be replaced with autos of Juan Uribe and all the land will mourn.
December 9, 2010 at 4:16 AM

deal said…
The most amazing thing about this article is finding out that Night Owl is sporadically on Twitter.
December 9, 2010 at 8:56 AM

dayf said…
Topps brass: "What? The collecting community is happy with one of our decisions??

cynicalbuddha said…
Sounds like some Wikileaks reprisals.
December 9, 2010 at 12:46 PM