December 10, 2010
(Hey! An actual real, live day off today! No work, no deadlines, no dropping into the office for a sec ... oh, wait, I've got to do that. Here's to getting in and out without the boss seeing. That's truly an accomplishment worth appreciating. Time for Cardboard Appreciation. This is the 93rd in a series): 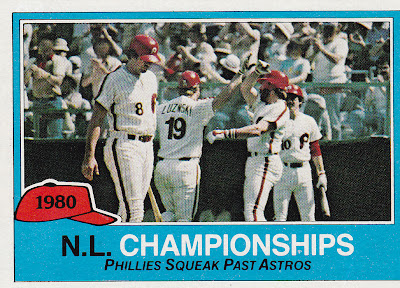 I'm on quite a 1981 kick lately. There is even a post coming up soon that relates to 1981. I don't know why I'm focused on that year. Perhaps it's the team that won the World Series that year.

I happened upon this card the other day -- probably during another bout of 1981ness -- and was struck by how blue it was. It's always been a favorite because of that.

But it's also disturbing to me because of two reasons.

First -- you'll have to click on the image -- to see this. Look at the two fans on the left-hand side. Their faces have been intentionally blotted out. They're not blurred or anything semi-natural. Instead, Topps just blanked out their faces. It's very creepy.

Secondly, the play being depicted on this card has me confused. I have always figured this picture to be showing the big moment of Game 1 of the 1980 NL Championship Series. Greg Luzinski hit a two-run home run in the sixth inning of a 3-1 Phillies victory over the Astros in Philadelphia.

You can see Mike Schmidt -- who was the second out in the inning -- and Larry Bowa -- greeting Luzinski.

But then there is the guy in the foreground. His uniform number is 8. I have associated the No. 8 from that period of Phillies history with Bob Boone. And I looked it up. Boone did indeed wear No. 8 in 1980.

But Boone wasn't the guy to follow Luzinski in the batting order in Game 1 or any of the games in the NLCS. The guy following Luzinski was Manny Trillo, who ended up winning the MVP of the NLCS that year. Trillo hit fifth in the order in Game 1, Boone hit eighth.

Trillo wore No. 9 according to baseball-reference. (He did wear No. 8 when he played for Oakland and Cleveland).

So I guess these are the possibilities that would explain what I see in the photo of this card:

1. That's not the Luzinski home run in Game 1.
2. That's actually Trillo with a bat in his hands. He wore No. 8 instead of No. 9 in the NLCS.
3. That's actually Boone and he's not coming to the plate, he just decided to run out and gather up the bat because the bat boy was chatting up some 11-year-old girl in the stands.
4. There used to be an umpire standing in that spot, but Topps airbrushed him out and inserted a photo of Boone, not realizing where he batted in the lineup.
5. Baseball-reference's uniform number system is off (yes, I just slapped myself for saying that).
6. The two fans with no faces are going to kill us all and none of this matters.

In reference to the first option, I explored the other possible play it could be, which was in Game 2 at Philadelphia.

In the fourth inning, Luzinski doubled with one out, scoring Schmidt. Luzinski was sacrificed to third by Trillo and then knocked home by a single from Garry Maddox. The next player that came to bat was Bowa, which would make sense in this photo because Bowa has a bat in his hands. The batter after Bowa was Boone. Perhaps he has a bat because he was in the hole.

So maybe that is the play instead of the Game 1 homer that I always thought was on this card. The Phillies actually lost Game 2, which may have thrown me off a little -- why would Topps show a Phillies moment from a game they lost?

But I've got to get out of here before those faceless fans make their move ...

I'm convinced this IS that key homer in game 1, for these reasons.

1. Day game shadows (and home unis) mean it has to be in Philly, so only game 1 or 2
2. That's Schmidt and (likely) Bake McBride (both 6th inning outs) greeting Luzinski in front of their dugout
3. This is closer to the dugout than home plate--I doubt Boone is walking up to hit, just moving out of the way after congratulating Luzinski -- Trillo and others higher in the lineup are probably off-picture to the left
4. Another shot of Luzinski batting shows Trillo on deck as #9 (photo at PhilliesPhans.com, halfway down)

night owl said…
You're probably right. I think the fact that Boone is holding a bat was throwing me off.

Matthew Glidden said…
Interesting, I thought you meant the FRONT guy (with full whiskers) was Bowa! Wouldn't the bearded player be more likely as McBride or Maddox? (I thought Schmidt just kept a mustache that year.)
December 13, 2010 at 12:10 PM

night owl said…
The bearded guy looks like a light-skinned player to me. He just looks like Schmidty. He's also too muscular to be McBride. As I remember McBride, he had the diameter of a Festivus pole.
December 13, 2010 at 2:41 PM

Matthew Glidden said…
I've benefitted from this post just by learning what a Festivus pole is. +1 for the Internet.
December 13, 2010 at 10:01 PM