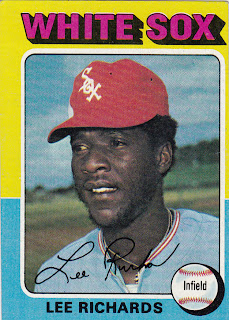 Lee Richard is officially launching a new segment on this blog. What's that make, about 300 features I've got going at once now?

I don't know very much about Richard, and I'm not going to spend any time looking him up right now. In fact, I'd prefer if the only thing I know about him is what I knew about him when I pulled this card as a youngster. 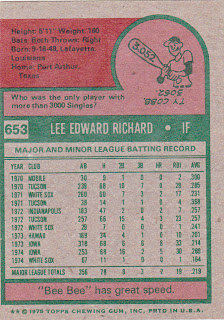 And that thing is that "Bee Bee" has great speed.

That's really all that needs to be said, isn't it?

We thought this was very humorous. All those years of stats, all those numbers, and all Topps could come up with is that "Bee Bee," whoever the hell that was, had great speed.

Years later, I look at that same sentence and know that what Topps was doing falls under the heading of "damning with faint praise." Topps really, really tried to find something complimentary to say about Richard, but when the player has spent that much time in the minors and his career batting average is .219, it's a struggle. So they came up with that thing about the "great speed," knowing full well that what they were really saying is "we know this guy is going nowhere, this is all we could manage."

Unlike some of the card write-ups today, card writers back in the day tried to stay positive, no matter how ridiculous it looked. And I'm convinced when they really had trouble finding something positive about a guy who had toiled awhile in the minors, they just ran the player's entire stats so it took up the entire card back. It was Topps' version of "if you can't say something nice, say nothing at all."

But most of the time, it really tried to say something nice.

That often would mean skipping the player's major league career entirely. Topps would search the minor leagues for a positive factoid. If that failed, it would go back to Legion ball or Pony League or high school, something, anything. Did Joe Baseball Player knock a 4-year-old on his ass with a whiffle bat during nursery time? Put it on the card! 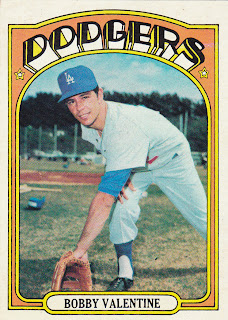 But the problem with dipping into pre-major league achievements is that there are few players who have eye-popping amateur stats, only because just about every professional baseball player has had a standout amateur career or they wouldn't be in the majors. Only someone like Bobby Valentine could have his pre-major league career appear on a baseball card and still have it come out sounding impressive. 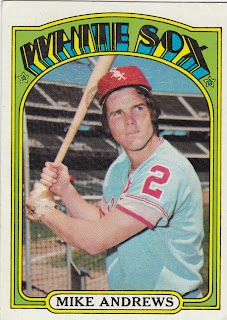 Great. It's not baseball and it's not even a four-year school. No wonder Charlie Finley had him fired. 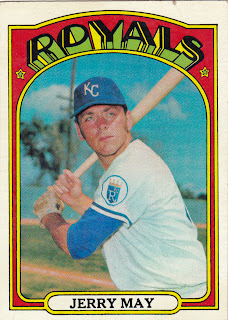 Sometimes the write-up on the back of the card doesn't reflect a player's veteran major league career. Jerry May had been around for awhile by the time the 1972 set came out. Eight years in the big leagues. He had caught for Bob Veale, Roy Face, Steve Blass and Dock Ellis. But this is what he got:

Ouch. Legion ball? Impressive at the time, sure. But May was more than 10 years removed from the Legion. I guess Topps didn't think much of May's catching. 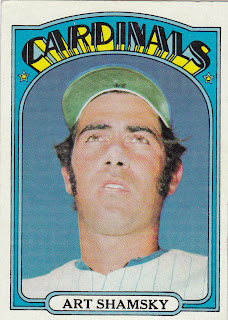 Art Shamsky. Hero of the 1969 Mets. Disguised on this card as a Cardinal. Crazy sideburns. But Topps chooses to write about none of it on the back.

After seven years in the majors, Topps would like to take you back to 1960 in Geneva, a time and place in which they apparently hyphenated the word "roommate." Rooming with Rose is a fun factoid, I suppose, but you have to remember this was during the time when Topps really tried to find something positive specific to the player's baseball ability.

So, Topps felt guilty about the "room-mate" mention and added the 12 stolen bases in 507 at-bats while in the Pacific Coast League in 1964. Wow, that's digging deep.

To Topps' credit, those were the most steals Shamsky ever had in one season, majors or minors. He never had more than a single steal in a major league season. So, I guess that's finding something positive, even if Topps could have filled the remaining blank space with context.

My question would be, how many steals did Shamsky have in Legion ball?

capewood said…
Nice post. I always love reading those little blurbs on the back of the cards. Sometimes they come with cartoons which are endless entertaining.
December 8, 2010 at 8:03 PM

Anonymous said…
Sometimes they didn't have room for much.

What were they going to put about Richard? "Was the White Sox top pick in the 1970 June draft. Named their opening day shortstop in 1971 but made 26 errors in 68 games and then couldn't hack CF. He didn't walk, couldn't read pitchers moves at all despite his blazing speed, and couldn't bunt. Harry Caray nicknamed him "The Juggler" because of his rotten hands.
December 8, 2010 at 8:17 PM

Eggrocket said…
In my life I've attained two in-person autographs. In 1982 at an Iowa Cubs game I got in line to have the San Diego Chicken autograph a color 8x10 I had purchased. The game attracted over 5,000 fans, which was a record at that time for that stadium.

The first in-person auto I got was at the same stadium in the early seventies when the stadium was home to the Iowa Oaks. My dad and I saw a player coming out of the clubhouse (I thought it was the men's room at the time). We snagged him on the way to the field. He signed it "BB Richards" and I was convinced he was a star. Only a star could go by "BB".

My brother and I still refer to Richards tongue-in-cheek when referring to great shortstops of all time.
December 9, 2010 at 10:33 AM