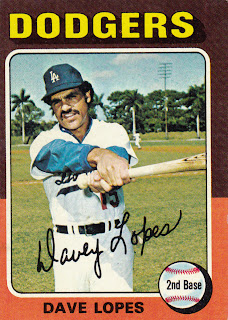 In my never-ending effort to get all of my cards cataloged, I finally reached the letter "L" in my alphabetized system.

This is huge. I was in the midst of players whose name began with "H" when I started this blog. So it has taken me 2 1/2 years to travel through four letters in the alphabet. And I haven't even gotten to two of the letters that should take a decade apiece -- "M" and "S".

I have no chance of finishing this.

But I won't ruin my mood by looking too far ahead. Instead I'll celebrate this modest milestone. I can't wait to file the cards I have of Lee Lacy, Fred Lynn and Chet Lemon (a player I seemed to pull consistently every year). Bring on Carney Lansford, Charlie Liebrandt, Ted Lilly and Steve Lombardozzi!

The "L" player with the most cards will be either Paul Lo Duca or Davey Lopes. I have no interest in showing Lo Duca's cards, so I'll stick with Lopes, one of my favorite players growing up.

Lopes is notable right now for two reasons. First, he recently returned to the Dodgers as the team's first base/base-running coach. I am very excited about this. Lopes knows what he's doing, and the Dodgers will definitely improve on their miserable baserunning stats from last season.

Secondly, I received the 1975 Lopes card from Greg at Plaschke, Thy Sweater Is Argyle. That means I have completed the 1975 Dodgers team set! Woo-hoo! Not too far away from finishing off the '75 Dodgers mini set either.

The '75 Lopes is not my favorite Lopes card, despite the palm trees. My favorite is probably one of two from the 1976 set: 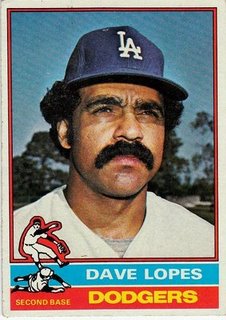 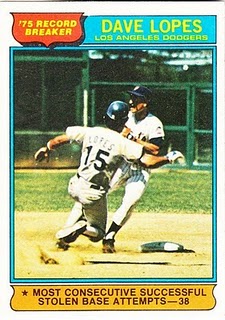 Or his record breaker card. Come to think of it, this is definitely my favorite Lopes card.

It was strange to see Lopes in a Brewers or Phillies uniform, and before that in an A's or Cubs uniform. He was always a Dodger to me and he is back where he belongs. 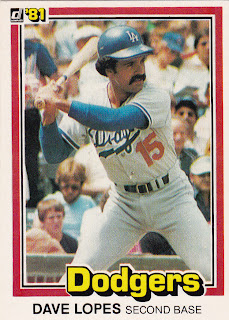 One other thing that doesn't have much to do with Lopes. Note the fan in the red hair and shades behind Lopes, not minding the game at all. Apparently that book he brought to Wrigley Field is just too good to put down. 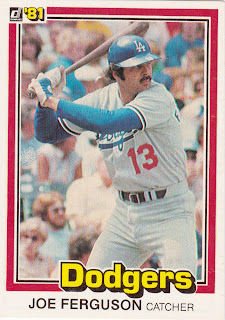 Now look. Redbeard is looking up now! But is he looking at the pitcher? It looks like he's staring toward the outfield. Red, over here! Over here!

This is a fear of mine -- that I would end up on not one, but two baseball cards and look like I wasn't paying attention at all. 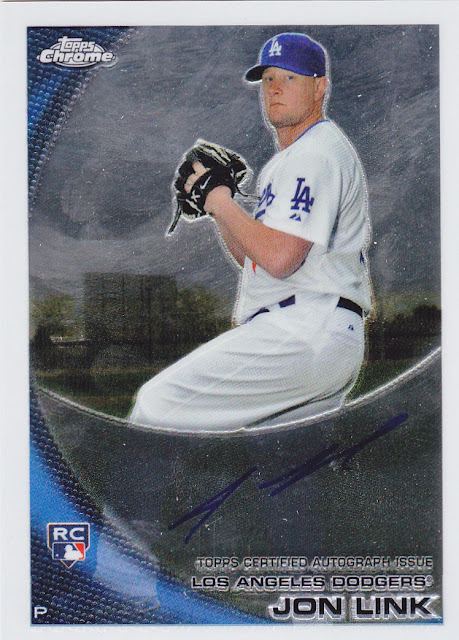 TOTAL LINK DOMINATION!!!!!!! IMMORTALITY IS MINE!


Now, do I want to put 15 bucks down on the blue refractor auto?

(Thanks, Joe. Payment on the way).

Bo said…
Believe it or not I have a spreadsheet with all my player cards sorted alphabetically. I just looked and the L that I have the most of is Mark Langston. Would not have guessed that - beat out Lankford, Larkin and Lofton among others.
December 8, 2010 at 12:46 PM

capewood said…
I have my cards in a database which I can sort any number of ways but the actual cards are just grouped by year and mostly by set. Back when I had considerably fewer cards I did put them all in alphabetical order. Then a few years later I put them back in year/set order. My wife thinks I'm crazy.
December 8, 2010 at 8:07 PM