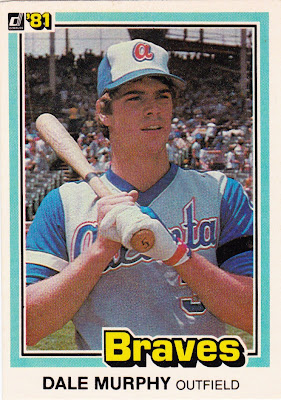 I've reached the point in the countdown where I have actually written out the placings for all of the remaining card sets. I know which card back will come in at No. 20 and all the way on down.

Before, it was a muddled mess. I knew the next three or four card backs I would feature, but I couldn't tell you much beyond that. It was a lot like life. Ask me what I'm doing this weekend, OK, but ask me what I am doing in January and you will get THE STARE.

So I am way ahead of myself with getting the final 20 nailed down. But don't get too settled. I'll probably muddle things up again on the way to No. 1. It's just my way.

At any rate, here is No. 21. It's 1981 Donruss. I'm sure that's thrown a few people off. This is the set with the super-thin card stock and all the typos, right?

I still think the card backs are cool. 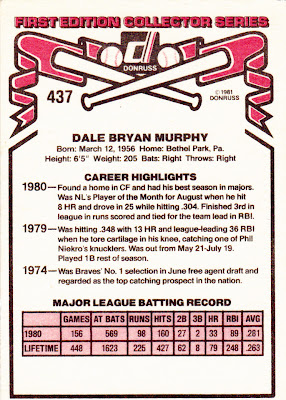 You would have to put yourselves in that time period to understand.

In 1981, two new card companies had hit the card shelves along with Topps (there actually weren't any card shelves in 1981. The card boxes would be thrown in with the candy boxes, either just underneath the register or in some special corner of the store near the front -- in some cases disconcertingly close or awesomely close -- depending on your proximity to puberty -- to the girlie magazines).

The first "new" company, Fleer, looked pretty similar to Topps in 1981. But the other new company, Donruss, looked amazingly different. The '81 Donruss may appear rather plain to collectors today, but in 1981 it was borderline mind-blowing. It was so WHITE and so BRIGHT. 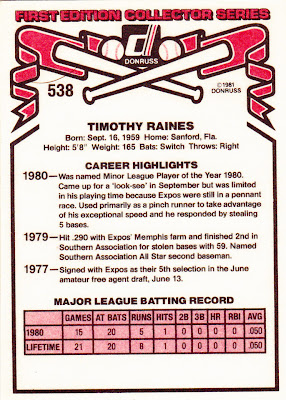 Except for a Hostess card here or there, we had never seen anything except gray cardboard stock, so this was crazy different. I also liked the crossed bats and balls/ribbon design at the top. And the "first edition" made you think you were collecting something special.

Sure, the single line of stats was disappointing. I have always liked me some full career stats. 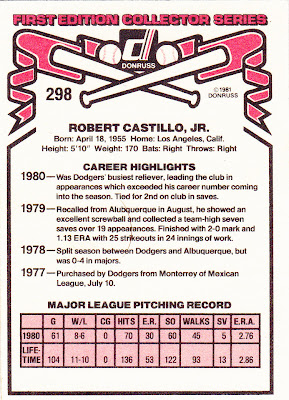 But the very best part of the card back, the main reason it is on the countdown, was the timeline on the back of a player's card.

This had been done before on 1961 Topps, but that was only for the recently passed year. Besides, I wasn't around in 1961.

This timeline gave you a nice rundown of a player's career. It was far more informative than the short blurb or cartoon that Topps used. (Here you see one of '81 Donruss' typos. Albuquerque is spelled "Alubquerque.") 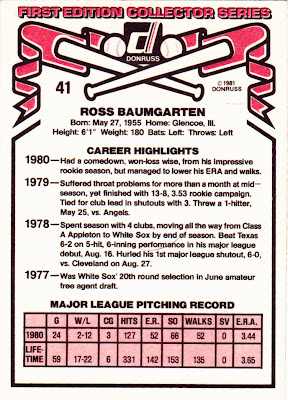 The timelines were often quite detailed, giving you more than stats. Here, you find out that Ross Baumgarten dealt with "throat problems" in 1979. Ouch. 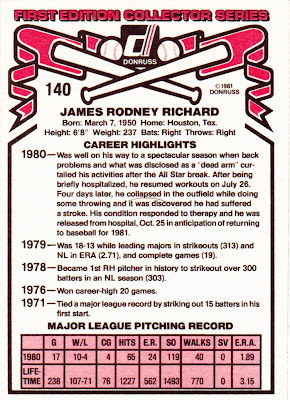 The J.R. Richard card provides specific detail about his trying 1980 season. If, for some reason you missed the news about Richard in '80, there it was on his Donruss card.

The timelines gave you something about the player that was more than just stats. Sure, there were stats in the timeline, too. But the timeline put a more human face on the player and gave you an idea of the progression of a player's career.

Out of the three card sets from which to choose, it was my favorite card back in 1981. 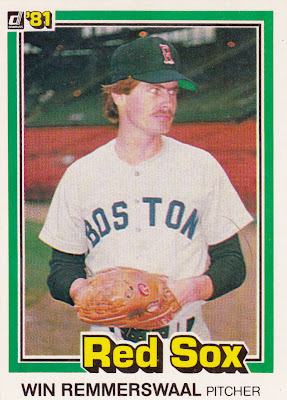 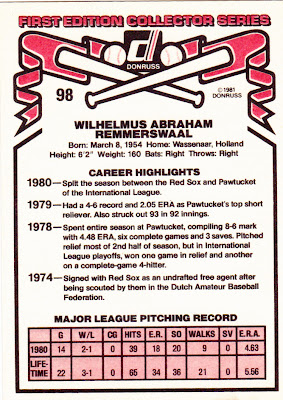 The timeline is average. Nothing exciting there. But another great part of '81 Donruss was that it listed a player's full name. That was especially fun for young adolescents like us who took delight in foreign-born players' names.

Chris Stufflestreet said…
Yep...even though they were easily damaged and more likely to show the results of kids not washing their hands before touching their cards, 1981 Donruss were certainly different. And I was a sucker for that "First Edition Collector Series" line.

Another card that explained an ailment from the 1980 season was found on the back of Graig Nettles' card. It explained that he had been felled by hepatitis and had to miss part of the season.