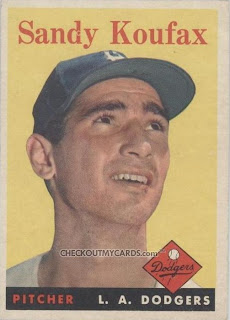 I don't have this card ... yet. I'm showing it because apparently the news is now official. Topps will feature on-card autographs of Sandy Koufax in at least three 2011 sets, Series 1, Heritage and Tribute.

The news has been released on these two sites, too. In the event that the news becomes unofficial, as it did last week, I promise I won't pull this post and NOT TELL YOU WHY, like a certain collecting publication's blog did. That is being very uncool to your readers.

Anyway, the best damn pitcher ever is here because it's time to feature the 1958 Topps set on the card back countdown. The front of the '58 set, in my opinion, has issues. All the close-ups of faces, the screw-ups with some of the image cut-outs (missing bats, etc.), the shoddy scrapbook look. Not good. But I'm a little biased because Topps stuck all of the Dodgers with a yellow background. If it had used blue or red, I might be a little more cordial. 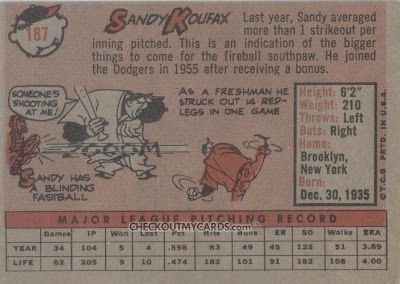 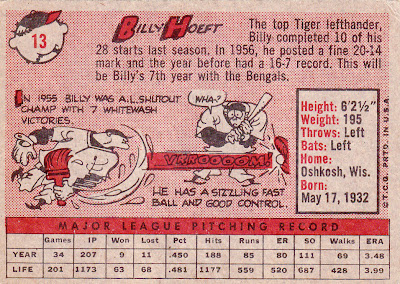 I like how the back is organized. I really like that the cartoon is the center of attention. And the drawings are very amusing to me. The majority of the cartoons feature a big galoot portraying all of the players. I get a kick out of it. 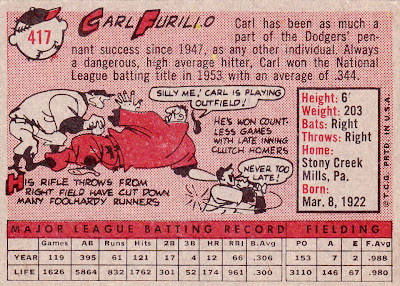 Because of the way some of the cartoons are arranged, it's sometimes hard to follow them. It takes me awhile to attach the caption to the cartoon. But then I see the big dumb guy and I chuckle. 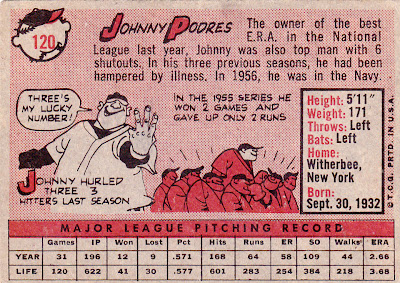 Hey, watch where you're pointing that one finger, Johnny!

I also like the Charlie Brown-esque design for the card number. It ties together the whole whimsical nature of the '58 backs.

Sure, there's only one year of stats, but for the '58 set, I'm more there for the cartoon.

I'm going with Willie Mays. This one I do have: 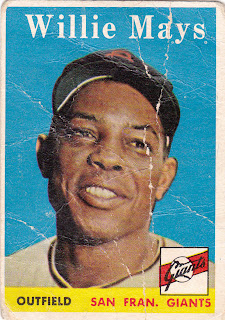 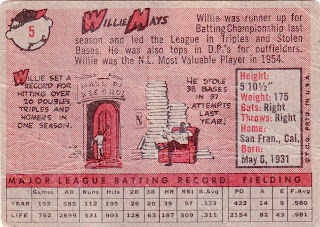 Yeah, I know there are about 47 creases in it, and even the back isn't all that interesting (no big galoot). But I'm not arguing against a Willie Mays card.

AdamE said…
I don't like most of the early Topps backs. But for a kind of odd reason. See back when I was younger I hardly owned any vintage stuff. So when I saw vintage cards I didn't know what year was which. Newer cards I could flip on the back and see the copywrite year or at least the last year was on the stat line. But early Topps didn't have either of those two features. So the only way I could figure them out was to ask someone or find a star player and look and figure out what card number he was then revert to a Beckett and match the player with the card number.

As I got older and aquired more cards this was no longer a problem, eventually they all got commited to memory. But my early struggles to figure out what year cards were from are commited to my memory also.
December 15, 2010 at 1:29 PM

carlsonjok said…
Forgive me if this is a stupid question. I haven't been involved with sports cards in over 25 years, but was considering starting to collect again. How exactly does the Koufax autographed card deal work?

Real autograph or just a special card issued with a printed autograph? How exactly are the distributed? In the box sets, or individual packs. Yeah, real newbie questions. Sorry 'bout that.
December 15, 2010 at 5:56 PM

night owl said…
It's just been announced so there aren't a lot of details yet.

1. There will exist a very limited number of cards that Koufax has actually signed (no sticker autographs).

2. They will be randomly inserted. How and how often, I don't know. I'm assuming your chances are better buying a hobby box, but who knows with the way retail has been working the last year. That's a total guess.

carlsonjok said…
I figured as much, but thought I would ask.

By the way, it is your 75 Topps blog that got me to thinking about collecting again. I started dabbling in baseball cards right around that time, hit my peak in 1977 and 1978 (golden years for Yankees fan) and basically was out by the early 80s when I hit high school. Seeing some of those cards gave me hit of nostalgia.
December 15, 2010 at 7:28 PM