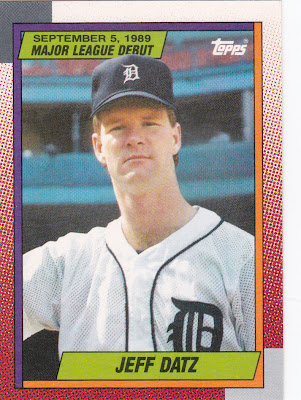 Thanks to Ryan of The Great Orioles Autograph Project, I can now close the book on at least the baseball portion of the Brush With Greatness series.

He sent me the last card I needed so that I would have a card of every major league player/manager that I had ever interviewed.

Jeff Datz played in only seven games as a catcher for the seventh-place 1989 Detroit Tigers. That was his entire career -- 10 at-bats, 2 hits. You are forgiven for missing it. I certainly did.

Datz didn't hold on to his playing career for very long. By 1994, he was a professional manager in the Cleveland Indians organization, leading the New York-Penn League Watertown club. Datz's team set a franchise record for victories in a season. A year later, the Watertown Indians would win their only NY-P title, but Datz wasn't part of the team then, and almost all of the players were different. That's how it works in Class A ball.

I covered only one Indians game that '94 season as it wasn't my beat. I wrote a story about how local fans should enjoy their pro baseball as there wouldn't be much major league baseball around that summer. The strike that wiped out the World Series was on the horizon and everyone knew it was coming.

I didn't talk to Datz for that story. I wanted to talk to the players and get their take. But it was an interesting year. Datz was the head of the only show in town. People couldn't find baseball on TV, so they came to the ballpark for their fix.

Almost 10 years later, I did talk to Datz. He was the first base coach for the Indians then. He returns to my area almost every offseason to go hunting with a former high school baseball coach he befriended. In talking to Datz, I learned what our old beat writer had said about him -- he was friendly, calm and understanding. He didn't have a lot of fascinating things to say, but he was more than happy to talk to you.

At the time, Datz had been with the Indians for more than a decade. He talked about the "Indians way," in a proud tone, which in my snarky way thought was odd because the "Indians way," to me, meant throwing a basement party in the American League East.

Datz is no longer part of the "Indians way." He has since moved on to the Orioles organization and now is in the Mariners organization. He will be the third base coach for Seattle next year.

Datz is one of those lifelong baseball men. They seem to gravitate toward Northern New York for some reason. The original baseball man was George Kissell, a legend in St. Louis, and a son of LaFargeville in northern Jefferson County. Dave Trembley, another baseball lifer, grew up in Carthage, a few miles east of me. And then there was Datz, who was born in New Jersey, but keeps coming back to Northern New York. 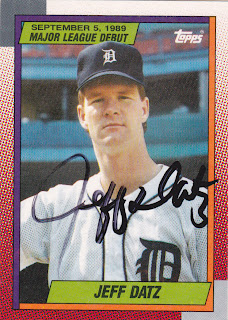 A Baseball Lifer. Sounds like a pretty good gig.

(Yup, Ryan sent me an autographed Datz card, too.)

Kevin said…
Best Jeff Datz fact? When he coached for the Indians, he apparently had a fan club called "Datz Awesome".
December 23, 2010 at 8:44 AM

Orioles Magic said…
Glad that I could help you wrap the brush with greatness feature. It's cool that you got to interview so many guys.
December 23, 2010 at 10:45 AM