'56 of the month: Johnny Antonelli 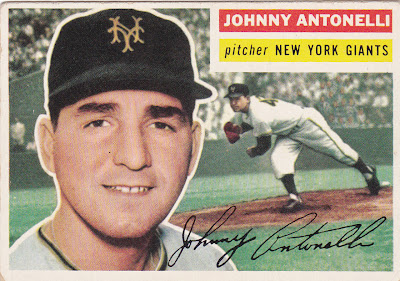 When I was a youngster, I walked everywhere. I walked to school, my friends' houses, piano lessons, the grocery store, the drug store, baseball games, everywhere. In the age before the national media persuaded parents that there were murderous pedophiles behind every third tree, I was informed regularly that God Gave You Two Feet Use Them.

I'l admit, walking was a good way to get to know the neighborhood. I'd memorize the houses on the way, which was particularly helpful if I was walking somewhere I didn't want to go. I'd know how close I was to my impending doom, and on the way back, I'd know how soon I could get away from my hellish existence (I'm not referring to school at all).

I became very familiar with my neighborhood this way. Later, when I had a bike, I rode countless streets all over the area and could tell anyone the name and location of every road within a five mile radius.

I was back to walking again because I wasn't allowed to explore an unfamiliar neighborhood with my bike right away. We lived closer to a busy street and the traffic freaked out my mother. So, I'd walk as I did before. I walked to the grocery store, the drug store, the pizza place and the ballfield.

Sometimes, on the way back, I'd walk past a tire store. I didn't pay it any attention. It was a glass-filled building with large tires on display. Boring.

But somewhere around this period, my brothers and I received that gift of 1956 Topps cards from my father's friend. I began to get acquainted with the names of 1950s ballplayers. More than just Willie, Mickey and the Duke, there were guys like Ray Jablonski and Jose Santiago and Johnny Antonelli.

Antonelli was a baseball pitcher for the New York Giants. In 1954, he became a hero to Giants fans for going 21-7 and helping the team win the World Series (bleah). During the offseason in 1954, Antonelli moved back to his hometown of Rochester, N.Y., and started a Firestone dealership. Over the next 40 years, the dealership expanded into a chain of Firestone tire stores.

One day, I was walking home, glanced at the tire store I had walked past a hundred times, and noticed that the sign on the store said "Johnny Antonelli Firestone."

Was that the Johnny Antonelli I thought it was?

I went back and forth about this for weeks, probably months. There was a thriving Italian presence in my town. It's very possible there was another Antonelli living up on the north side who owned the tire store.

But somehow I found out that Antonelli -- the same one who was a baseball pitcher -- did run the tire store. But why this store in my neighborhood? If I walked in, would he be there? Would he talk baseball with me? Would he sign something for me?

I never found out because at 13 years old I never had the guts to walk in, pretend I was interested in tires and then ask, "say, are you Johnny Antonelli The Baseball Player?"

It's a good thing I didn't anyway, because Antonelli didn't work there. He was based out of Rochester. He may have visited his other stores periodically, but the chances of catching him in action were slim.

I don't think that building is a tire store anymore. I don't know what it is. It's at the end of a street that isn't very pleasant, so when I'm in town I don't even drive that way anymore, let alone walk. 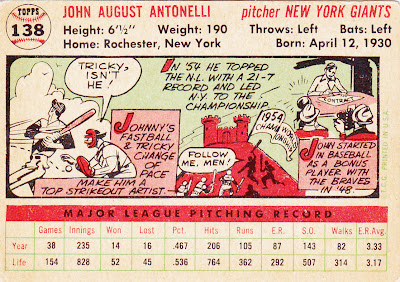 He was such a huge prospect (his father set up a scouting session for him at a stadium in Rochester and he impressed scouts so much with his performance that he receive interest across the majors). The Boston Braves paid him a $50,000 bonus, the largest ever at the time. But his teammates grew jealous -- established pitcher Johnny Sain was making just $21,000 -- and Antonelli didn't have a lot of success with the Braves. He wasn't even voted a World Series share in 1948. People around baseball called him overpaid.

He later missed two years for military duty. When he returned, the Braves were in Milwaukee. Antonelli couldn't get untracked, and Braves great Warren Spahn suggested the Braves had too many lefties and that Antonelli was expendable. Antonelli was traded to the Giants in a deal for home run hero Bobby Thomson.

Giants fans weren't happy, but Antonelli proceeded to win eight straight games, make the All-Star team, beat the Braves twice, win Game 2 of the World Series, and close out the clinching Game 4 of the Series.

When the Giants moved to San Francisco, Antonelli grew disenchanted with his new location that was so far from where he lived. He didn't enjoy the stadium, the media and the team. He was traded to Cleveland, and then the Milwaukee Braves in '61. In the offseason he was sold to the expansion New York Mets. At age 31, Antonelli retired, saying he was tired of the travel.

Antonelli seemed to be content living in New York state and running his tire stores. Every once in awhile I would read about a card show that featured Antonelli as an autograph guest. I would envision him signing cards and memorabilia in a tire store. I don't know why. Probably because I hoped he'd come to my town and sign in my tire store.

He never did. I've still never entered that building. And I don't walk nearly as much as I should anymore.

Still got the card though. So I've got that going for me.

Matt Runyon said…
When I was a kid I managed to trade for a 1959 Antonelli. We called him "Scotty" because he looked kinda like the Enterprise engineer.
December 12, 2010 at 3:12 PM

Scott Crawford said…
Good ballplayer, cool card (like damn near every other '56), and I'd suggest you try getting a TTM signature from him, but he appears to have stopped signing in the last year or so.
December 12, 2010 at 3:15 PM

Play at the Plate said…
I'm loving the '56 set more and more. I remember walking and riding bikes all over when I was a kid. We would leave in the morning and come back at night. Mom never wondered if we were safe or worried about us.
December 13, 2010 at 1:09 AM