How to succeed at player collecting without really trying 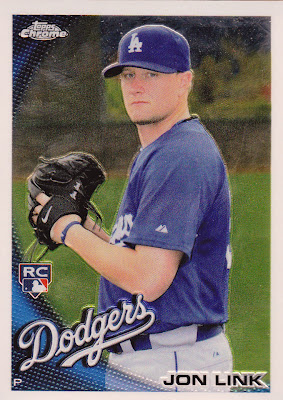 It started out with a simple chrome card. "Heh, Jon Link," I said. "I can't believe they made a card of this guy."

But not being one to look a gift rookie Dodger reliever with 8 2/3 innings of major league experience in the mouth, I happily filed away my Topps Chrome Link card and assured myself it might be the last Link card I ever obtained (I do have a couple minor league Link cards). 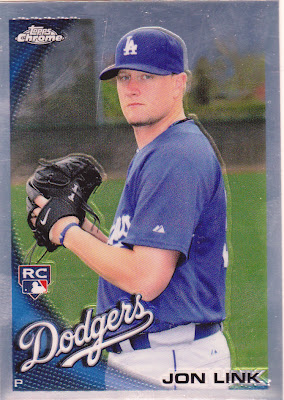 But then the Link Chrome refractor arrived. I didn't even ask for it or anything. But there it was, paralleled and proud. And that meant Link was unparalleled in his chromeness. I had both his regular chrome and refractored chrome before any other Dodger. 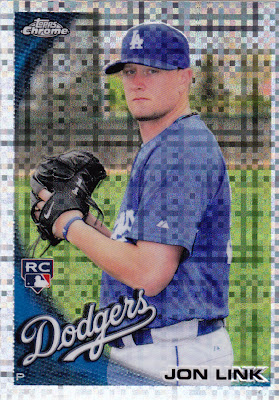 Yet, Link wouldn't stop there. Xrefractor Link arrived just as mysteriously as refractor Link. Sure, I collect Dodgers and all, but not once have I expressed interest in obtaining as many versions of Virginia Commonwealth's former star pitcher as I could.

But apparently some thought having as many Links as I could was for my own good. 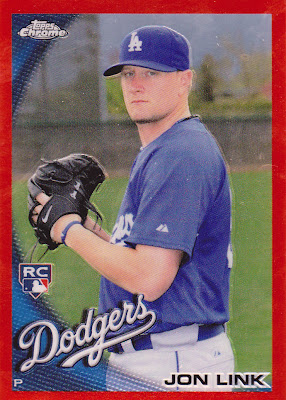 Missing Link? I don't think so.

Then, a couple days ago, I scraped up enough pennies to buy a single rack pack of Topps Update. I thumbed through the too many all-star cards, the players I've never heard of, and came across this: 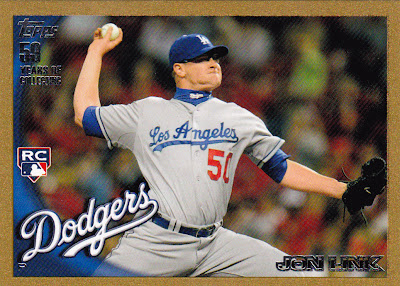 A gold parallel of Link's Update card. I can count the number of gold parallels that I have pulled of my favorite team on one hand -- and I wouldn't need all the fingers. I think it's been three times at the most. Probably two. But Link, son of a gun, is one of them.

I was amused that the regular Link Update card was one of the few Dodger Update cards that I needed. Maybe I wasn't the Link magnet I thought I was. 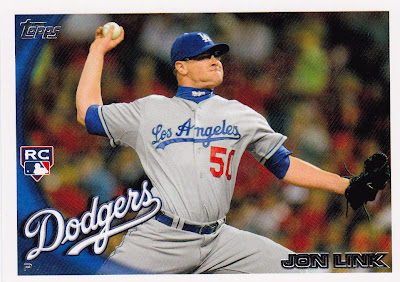 Regular Update Link showed up in the mailbox on Saturday. Scott of Smed's Baseball Card Blog sent it to me (I'll get to the rest of the cards he sent around Groundhog Day). I do believe it could be a night card.

I didn't search out the Link cards. All I had to do is say, "Hey, I'm a Dodger fan." And get a little lucky. If you can call pulling Jon Link cards "lucky."

So have I become a Jon Link super collector?

I guess so. If it's going to be this painless, then I might as well go for it. Bring on the red, blue, purple and super refractor Link! Black-border me! Platinum-border me!

I don't know what you player collectors are complaining about. This stuff is easy.

Greg Zakwin said…
My Russ Martin collection can attest to this post's premise.

Charles @ Hoopography said…
You maybe the first and only Link Super collector right now. I always thought it would be cool to start collecting a player from their start and get ever card of theirs. baseball is soo tough tho because of all the parallels and sets.
December 5, 2010 at 9:11 AM

Fuji said…
Looks like you can pick up the chrome auto and the chrome refractor autos of Link for under $4 (each) on COMC.

I like Charles' idea... and have tried several times, but I end up giving up in the end. Best of luck on becoming one of the only Jon Link super collectors out there!
December 5, 2010 at 6:33 PM

Anonymous said…
I'm either glad I added to your Link collection, or saddened that I enhanced your addiction to Link. Perhaps a 12-step meeting is in order?