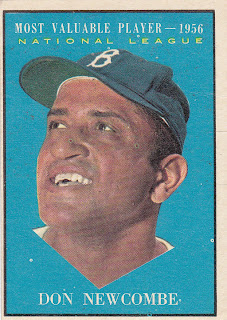 One of the curses/blessings about being a Dodger fan is that part of its history is considered what I would call collecting eminent domain. You can be a Twins fan, a Diamondbacks fan, whatever, and still be interested in collecting Dodger cards -- as long as they're Brooklyn Dodger cards.

Personally, I don't get that. If I hate a team, I hate it for all of its history. I hate the Yankees from Jack Chesbro to Nick Swisher. They don't get time off for pleasant behavior in the '60s because Elston Howard played for them for a period. I dislike them from start to finish.

But I constantly run into collectors who spit on current Dodger blue, but still collect Robinson or Reese or Koufax. I'm trying to embrace that and be happy that my team has some of the most collectible players in the game, as I still desperately try to get the same cards that others are also acquiring.

Such is the case with Alfredo of My Past Time ... I Love it! He has recently announced a decision to collect Brooklyn Dodgers. Ouch. With the enthusiasm he puts into collecting, he'll have more Brooklyn cards in his possession by next month than I will in 25 years.

But this is not a race, is it?

That's something I have to keep reminding myself -- in a lot of areas of life.

The Wicked One recently sent me some cards, that actually included the Brooklyn Dodger you see at the top of the post. It's one of those MVP subset cards from the 1961 Topps set. I like it a lot. I like it so much that I gave up a very nice 1968 item for Wicked's set-collecting needs. But I need my Brooklyn Dodgers. And I'm going to say the same thing Wicked did:

If you have any Brooklyn Dodger cards you want to get rid of -- think about your Night Owl. He wants those Trolley Dodgers, too. He really, really wants them.

Anyway, want to see some more cool cards from Wicked?

You bet you do: 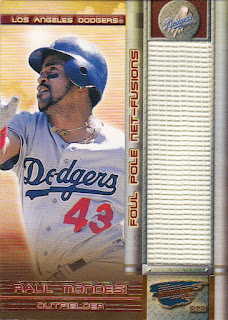 Isn't that great and strange at the same time? This is from the period when Pacific was throwing everything on cardboard and hoping it would stick, or at least halt their plunge into irrelevance. That is real, live netting on the right side of the card. And, yes, they did call it "Net-Fusions." Once I stop cringing, I'll try to figure out what the hell that means. 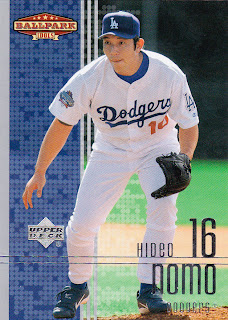 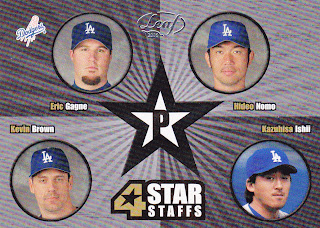 Two more Hideo Nomo cards for the collection. (oh, and three other guys that are best ignored). Alfredo certainly knows player collecting, and he always looks out for his fellow traders' favorite players. He is the best at doing that. 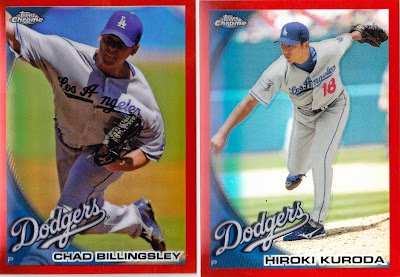 More of those nifty orange refractors that I've been hearing some not-so-kind things about lately. I don't care if Topps retailed the hell out of them. I still like them and am happy that they're accessible. Nothing wrong with being accessible. Better than not returning phone calls, which is what those gold refractors do. 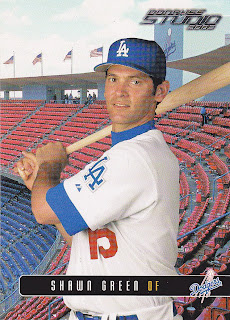 Heh, the background for this photo must have been taken in the fourth inning at Dodger Stadium. ... Hey, hey, I CAN say that because I'm a Dodger fan. You fans of other teams just focus on your own team's faults. 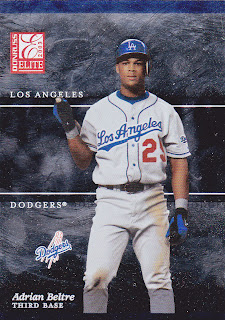 Apparently, Beltre is headed back to the American League West. Too bad he won't return to the Dodgers, so I can justify the 150-plus cards I have of him. 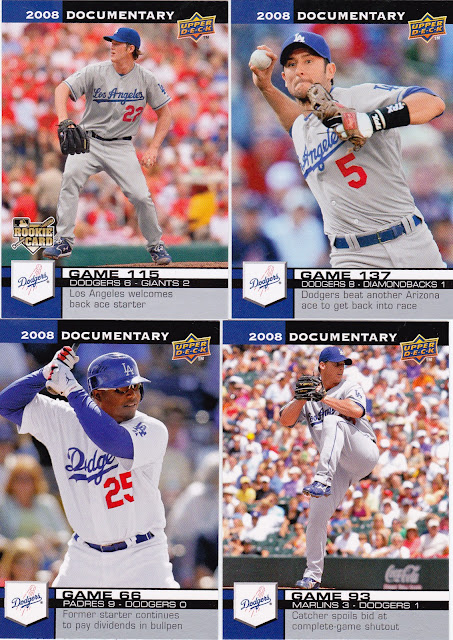 Documentary! This set is fun when I prevent my brain from it's natural tendency to value accuracy in ... well, just about everything. My personal favorite is the Andruw Jones card that features a 9-0 loss to the Padres. The back praises Chan Ho Park's 2 2/3 innings of mop-up duty. No mention of Jones though ... whoops! There's my brain get all accurate-like again! 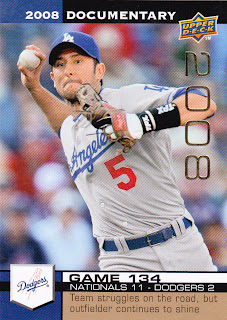 Every set has to have a parallel, I guess. This was Documentary's lame attempt.

Wicked, homie, please ... save me your Brooklyn dupes.

Two Packs A Day said…
"Net-Fusions" - the best I can come up with is infusing (embedding) a foul pole net into the card.

I bought one thinking it was a real foul pole net relic card. Once it came (and still today), I think it might not be the actual foul pole netting from a stadium and could be the first fake manufactured relic insert (predating UD and Topps in that department).
December 19, 2010 at 4:27 AM

Scott Crawford said…
As you might know, I'm into the Brooklyn guys too, but it's something that's been sort of ingrained in me since I was a kid. Had the Dodgers been in Brooklyn when I discovered baseball, chances are good that, even with Reggie around (who, to a 4-6 year old kid, whenever I discovered him, was awesome), I still would've grown up a Dodger fan. It was a generational thing in my family before they left.

Post-Brooklyn is where it gets weird for me, because I've found myself adding a bunch of L.A. guys to my player collection list recently. Some of these guys are guys like Wally Moon, who would've fit in great in Brooklyn (had the eyebrows for it and everything) and who just missed being one of those Dodgers, but some of them are from teams I hated on principle as a kid. I've collected Valenzuela for a while now (and I write letters to the Hall Of Fame on his behalf regularly because he's non-existent in their '81 display case, which is a criminal omission), but I've added Pedro Guerrero (Guy was super cool, what can I say?) and, horror of horrors, Steve Garvey in the past few weeks!

With guys like Garvey and Valenzuela, my interest in them reminds me of a scene in the graphic novel "The Death Of Captain Marvel" where a Skrull (his sworn enemy) comes to Mar-Vell's deathbed to pin a medal of valor on him, and says something like "We're giving you this medal not because you were our enemy, but you were our greatest enemy."

It's this weird grudging respect thing, and while I doubt I'd ever start collecting his stuff, it's also part of why I don't get rid of my Pedro Martinez cards (that and the fact that his cards always looked awesome, the rat bastard).

Eggrocket said…
Funny...my teams are Red Sox in the AL and Dodgers in the NL despite my favorite team as a kid being the Big Red Machine (the Dodgers' key rival in the 70s in general and the the Red Sox slayers in '75 in particular). I also had a fascination with the Brooklyn Dodgers of years-gone-by.

Red Sox were always #2 when I was growing up, but going to college in Boston bumped them up. And interestingly, I started liking the LA Dodgers because of the Brooklyn fascination. So that leaves me liking Dodgers of all generations...even, ironically, the 70s Dodgers, even though at the time they were in direct competition with my beloved team of Bench/Rose/Perez/Foster/et al. group.
December 20, 2010 at 12:22 AM