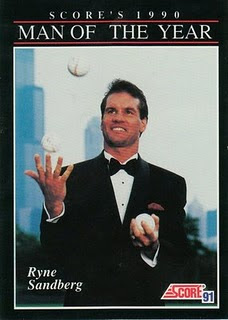 The last time I featured Ryne Sandberg in a tux, I listed the 100 things that I had learned about card-collecting in 2008.

I was just four months into blogging then. By some people's standards I am a grizzled blogging veteran now -- I have the bronzed trophy of a dude in his underwear sitting at his computer to prove it -- but I still have a lot to learn.

Although it's obvious I enjoy a good list, I'm not going to do that this year. I'm just going to look back at my favorite posts from '09 here at Night Owl Cards -- you know, just in case I have to pad the resume. I do still write for a living, so you never know when I'll have to dash off a copy of that ode to 1984 Donruss to a prospective employer.

First are the posts that showed how great this blogging community is. 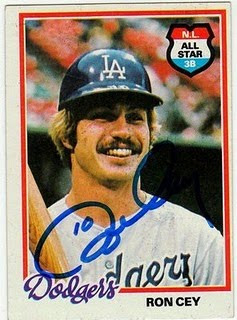 Feb. 6: Thanks to Brian at 30-Year-Old Cardboard, I made my first successful TTM try in 2009. Cey is really the only autographed card I've ever wanted. But that didn't make the successes this year with Duke Snider, Fernando Valenzuela, Jerry Reuss and Carl Erskine any less enjoyable. 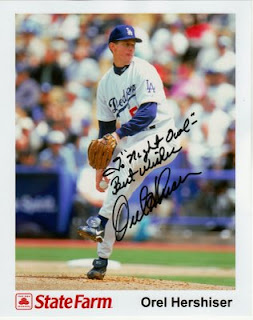 June 19: Zach from Autographed Cards provided the most mind-blowing moment for me in 2009, sending along this glossy photo that Orel Hershiser signed to "Night Owl." I am still amazed.
Second among my favorite posts are the ones about the goings-on in the hobby that struck a chord with readers. I'm not someone who is on the cutting edge of card collecting. I don't expect to be getting free boxes of product to bust here. But I do pay attention and sometimes I have an opinion. 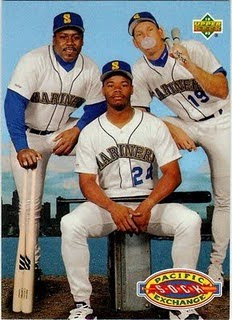 Aug. 6: News of Upper Deck losing its MLB license prompted me to remember my all-time favorite Upper Deck set. That set was so good that it made this Topps devotee completely shun Topps for all of 1993. 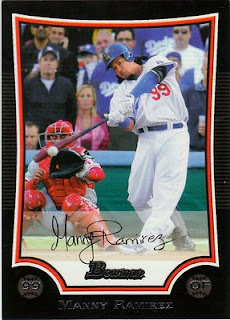 June 3: I received this card in a trade, and it wasn't long before I noticed that there was an extra foot growing out of Manny Ramirez's leg. A steroid side-effect? No, not unless use of certain female fertility drugs causes you to sprout a size 13 shoe. It was just Topps/Bowman erasing the umpire but forgetting to erase his foot! 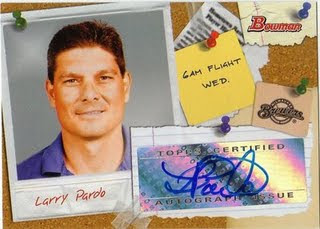 June 7 and June 8: I write this blog under the impression that only a few devoted card collectors are going to read it. But I should know that anyone can stumble across it. When MLB scout Larry Pardo did, he wasn't thrilled with my diatribe against Bowman's scout autograph cards. I don't have a problem with scouts. Not even Larry. But I do dislike scout autographs. And so do people who voted in the worst card of '09 poll. 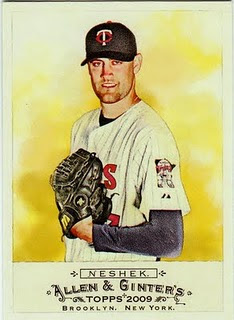 Aug. 7: I also hate it when people call card collectors "nerds," or card collecting "nerdy." I almost hate it even more when card collectors say, "Yeah, you're right, we're nerds." Speak for yourself. I collect cards, but I am not nerdy. I have a home, a family, a decent job, friends, and write my blog in a well-lit dining room. Oh, and memo to Kornheiser and Wilbon: card collecting will be around when your show is not.
Next are the quirky posts. I'm actually more comfortable when I'm not speaking for a community but doing my own little off-the-wall thing. If others like it, that's all the better. 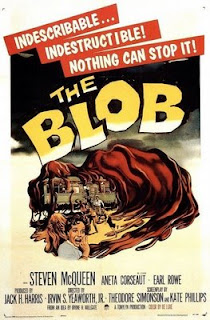 May 4: As a child, my brother and I came up with a name for the player that makes the last out in a game. With a little reminiscing and research, a post was born. I'm happy others got a kick out of it. Kids have the best ideas. 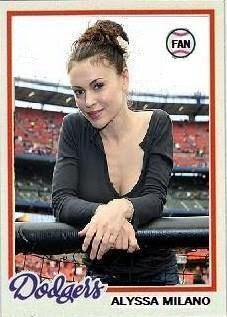 Sept. 6: Alyssa Milano's news that she was married was crushing, and it wasn't because she is an attractive TV/movie actress who is also a Dodger fan. It's because she went over to the dark side for a husband. It was like one of those bad Charmed episodes. Wait a minute, they were all bad. Nice outfits. But bad. 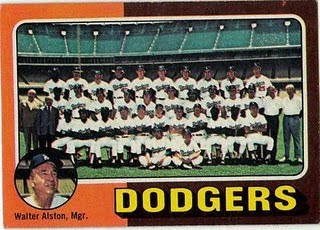 March 1: I never expected my obsessive ranking of my personal preference in baseball teams to be of interest to anyone. Little did I know that lots of other people do this. And I'll be updating the list in 2010.
But my favorite posts are the ones that tell a personal story. Yeah, maybe it's narcissistic, but I'm writing with the hope of connecting with others who think like me or have encountered the same situation. I'm sick of getting blank looks in real life. These are posts that made a connection. 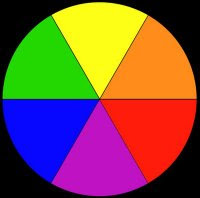 April 22: I have something called synesthesia. It causes me to associate words or letters with colors. After I wrote the post, I came across others who either had this condition or knew people who did. It was cool to hear their stories. 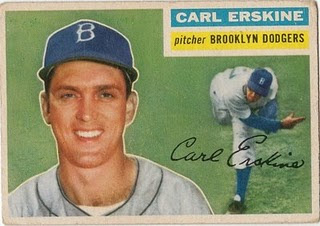 March 24: One of my favorite memories as a kid was when my dad placed a large grocery bag full of 195os baseball cards on the dining room table. I love having a community of card collectors who can appreciate stories like this. And I like to read their stories, too. Why else would I spend hours each day in front of the computer? 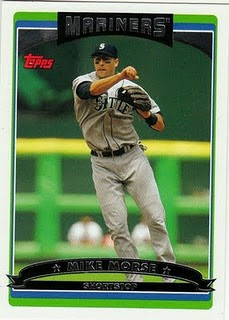 July 31: Unlike some bloggers, I don't get to go to a lot of ball games. But the game I went to this year will stay in my mind forever. It's the day my daughter admitted she enjoyed baseball. She hasn't repeated that sentiment since. But I just have to get her out to another game. 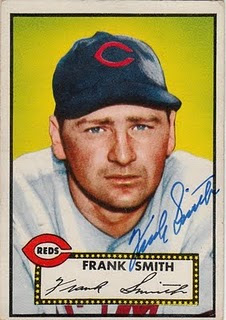 Sept. 24: One of my favorite things about reading other blogs is how much reverence they have for the past players of the game. That inspired me to tell a story about my acquaintance with a pitcher from the 1950s. I really enjoyed writing the post and the comments made afterward.
OK, that's enough regurgitation. I'll move onto the Worst Card of 2009.
After 83 votes in the poll, the winner of the Worst Card, in fairly easy fashion is: 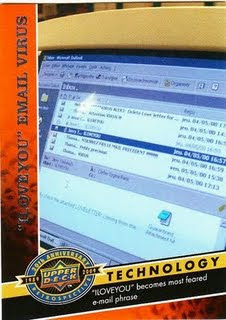 The "I Love You" Virus card from the despised Upper Deck 20th Anniversary Retrospective set.
It was pretty obvious that this card was going to win. Nobody liked getting these cards in their packs. And when the restrospective card was not sports-related, that was even worse.
I'm guessing some folks didn't vote for that card because it wasn't connected to baseball. So here is the baseball card that received the most votes as the worst card: Congrats to Michael Young. Michael --- wake up! You've won. Michael! Michael!
Ah, never mind. Here is the final "Worst Card" tally:
1. I Love You Virus, UD 20th Anniversary Retrospective, 28 votes
2. Michael Young, O-Pee-Chee Moments insert, 19 votes
3. Larry Pardo, Bowman scout autograph card, 13 votes
4. Dave Concepcion, Goudey, 10 votes
5. Ryan Braun, Topps, 4 votes
6. Dave Winfield, UD 20th Anniversary Retrospective, 3 votes
7. Tony Gwynn, UD 20th Anniversary Retrospective, 2 votes
7. Cito Gaston, Topps, 2 votes
9. Humberto Quintero, Topps, 2 votes
Thanks for the votes.
By now you're saying, "that's an awful lot of looking backward, Night Owl. Where's the looking forward?"
Well, I don't have a lot to say about what's ahead, mostly because I can't predict the future. So what I'd say would mostly involve wishes and speculation. Wishes are great but you don't need another blog to yammer about on-card autographs and more/fewer products. There are enough of those folks elsewhere. They do it better.
And as far as speculation? Hate it.
So, the following is about all I'll write about looking forward: I opened a hobby box of Topps Chrome yesterday. It wasn't kind to me.
There were two guaranteed autographs: 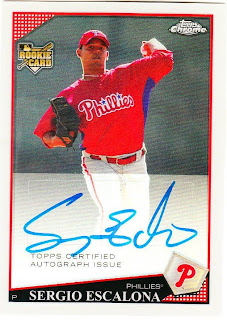 The first one is Sergio Escalona, a young pitcher for the Phillies. This card is spoken for already. I just swung a deal for it. 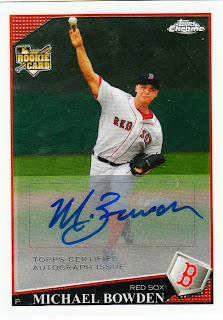 This is the other one. Young Michael Bowden of the Red Sox. I pulled another Red Sox auto a couple of weeks ago. Well, an ex-Red Sox auto. Justin Masterson, out of a box of Goodwin.
Both are up for trade. I'm looking for Dodger autos. The more current the better.
So there you go. There's the "looking forward" part. I have a trade in my future!
Happy New Year! May 2010 be the best blogging year ever.

Play at the Plate said…
Blog of the Year is well deserved!! I didn't find the blogosphere until August I think, and even though I've read many of your previous posts, I missed the March 1 one on the team rankings. I love that idea. All the older team checklists make it a really nice post. Have a great 2010!
January 1, 2010 at 1:22 AM

jacobmrley said…
You blog with the best of 'em! Congrats.

I commented on an earlier post, I have a pile of 2009 Chrome if you need to complete your set. I am sure I can come up with something for ya. email me your list when you get a chance.
January 1, 2010 at 4:43 AM