One of my favorite on-camera interviews ever ... 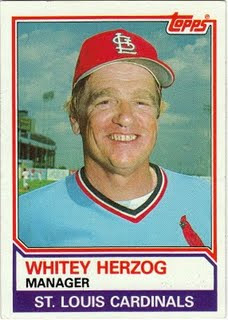 (Scene-setter: It's 1986. Former Yale president A. Bartlett Giamatti has just been named president of the National League. Meanwhile, NBC Game of the Week studio host Marv Albert is interviewing Cardinals manager Whitey Herzog via satellite before Saturday's game. The likable Albert, who was known for getting a little frisky in his interviews, takes a total detour in questioning Herzog, mentions the Giamatti hiring, and then says this):

Albert (stilted, forceful and spunky): There's an opening for you now at Yale!

If I knew what ROTFLMAO meant at the time, I would have said it. Because I was doing it.

Now, as of today, Whitey Herzog has a title more prestigious than "President of Yale" or even "Member of Baseball's A-Team." He is a Baseball Hall of Famer.

Congrats to the White Rat, even if he didn't know when to relieve Atlee Hammaker in the 1983 All-Star Game.

Mark Aubrey said…
"... a little frisky in his interviews..."

According to wikipedia, the wellspring of all true knowledge, he plead guilty to misdemeanor assault and battery charges.

"Albert was given a 12-month suspended sentence and ordered to only announce play-by-play for the Los Angeles Clippers."