Joy of an upgraded card, #3 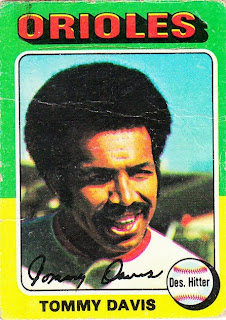 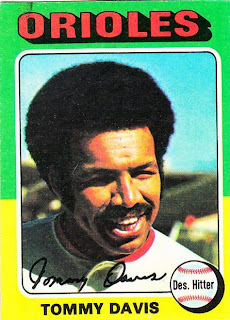 The top card is one of the first '75 mini cards I ever saw. It is such an ingrained part of my collecting history that I barely notice what makes the card stand out: the power Afro, the off-center photo, the listed position of something called "Des. Hitter."
I barely notice the creases either. If you're keeping count, there is one moving east-west through Davis' Afro. There is one leaning on the left side of his 'fro. There is one bordering his left jawline. There is one just over his right shoulder. And there is one through the "D" in his name.
And until I scanned this card, I had forgotten that someone had underlined "Orioles" with a red pen. I'm guessing it was my youngest brother, an Orioles fan, and someone barely of writing age when this card came out.
Throw in some surface scratches, scuffing, and rounded corners and that's a card whose best years are long gone.
But I've recently acquired a newer version of the card. It is very odd seeing Davis shiny and new again. It is so unlike him. Thank goodness he's still off-center.
Thanks for the upgrade, gcrl. It's cool. Plus, the new card helped me figure out what was great about the old card. As usual, I'll be keeping them both.

Field of Cards said…
Gotta love the gcrl. I voted for that xmas card on Beardy's site that grcl submitted.

Your little brother was so cool that he underlined the Orioles before he could really even write much! How was he so on target and you ended up following the wrong team? ;)
December 27, 2009 at 3:51 AM

gcrl said…
glad the tommy is appreciated! he became quite a traveler after leaving la.
and thanks for the vote foc!
December 27, 2009 at 5:17 PM