The continuing case of the disappearing umpire 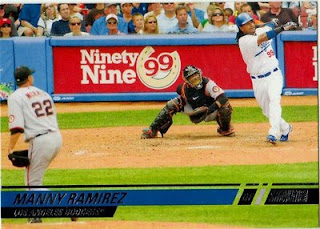 OK, class, when we last left off we were talking about Manny Ramirez and the case of the disappearing umpire.

Remember the 2008 Topps Stadium Club card? Manny Ramirez was photoshopped into a Dodgers uniform and the entire stadium was transformed into Dodger Stadium (it's actually Fenway Park). And the poor umpire was erased from the photo altogether, because of licensing issues.

And you remember why that was wrong, right? In photojournalism circles this is a No.1 no-no. A good way to earn your pink slip. But even for a card company, it's bad news because it's deceptive. And we all know that card companies have trust issues when it comes to their customer base these days. (Not to mention, when have you ever seen a photo of a hitter at the plate during a game without the umpire in the shot?)

All right, for those of you who remember all that, I apologize for the rehash. That was for the benefit of the rest of the class that may be a little, um, slow, or were in the principal's office that day.

Now, we'll get everyone up to date with a 2009 Bowman card of Manny Ramirez, sent to me by Jeff at Card Junkie: 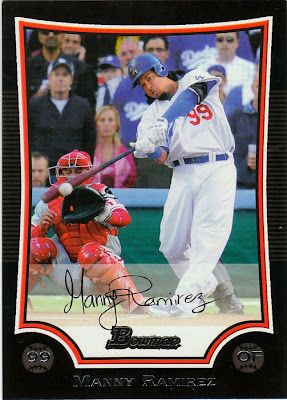 I'm showing it nice and big so you can take in the photo. It's a nice shot, and unlike the Stadium Club card, Ramirez appears to be wearing an actual Dodger uniform. (EDIT: But I have no idea where it was played. Manny is in a home uniform, the catcher is in a road uniform, but that does not look like Dodger Stadium).

My goodness, Topps rubbed out the umpire but left his leg to send a message!!!!! You don't want to mess with these Topps guys. They're bad news.

Actually, what happened here appears to be another sloppy photo-tinkering performance. Thanks to the incomplete erasing job, it looks as if Ramirez is growing a third foot out of his leg (a PED side-effect, perhaps?) The ump is gone again because of licensing issues, but they forget to get rid of the foot! Can the umpire sue because Topps used his foot without permission? Hmmmm.

Jeff also sent a few other Bowman Dodgers. No funny business going on in these cards. 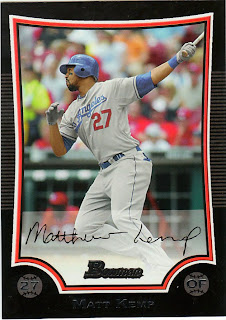 The awe-inspiring Matt Kemp. He still strikes out too much, but he's valuable in the lineup, and he's made some great outfield plays this season. 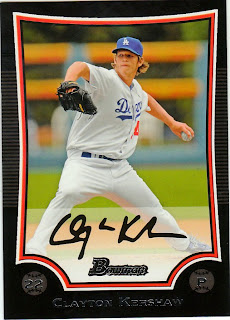 My man Clayton Kershaw. I like the signature. Kershaw's doing his part in a patchwork Dodgers rotation. I guess he was prepared to relieve Monday night if Hiroki Kuroda couldn't go five in his return to the rotation. I was relieved they didn't have to use Kershaw. 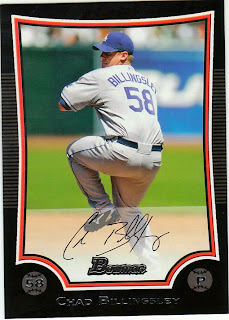 Tonight's starter, Chad Billingsley. Boy, Bowman didn't mess around with which players to pick with the non-prospects did they? You couldn't find four finer Dodgers. Billingsley has fallen off a little since his great start, but part of that is because he hasn't gotten a lot of run support.
Jeff, thanks for the cards, especially the very entertaining Ramirez card. I didn't even notice the disappearing umpire when you showed it on your video.

Jeffrey Wolfe said…
Holy crap! How did I miss that? I thought there was something fishy about that photo!
June 3, 2009 at 9:16 PM

Unknown said…
This is nothing new tho.. Topps has been changing the hats/uniforms of players that got traded for a LONG time - at least since the 70's, possibly earlier.. They just have it easier now with computers and photoshop, lol..

That is sketchy with the ump removed mid-swing tho.. It's seems funny kinda like a joke too, cuz Manny is known for playing by his own rules - so it's like he's so bad, he hits without an ump, hahah.
June 4, 2009 at 3:52 AM

night owl said…
Oh, I know, Billy. I'm aware of all the airbrushing and photoshopping, although the Stadium Club card was taking it to a new level.

My thing with this Bowman card is they forgot to erase the ump's foot. So now they have this phantom foot just sitting there on the card. It's bizarre.
June 4, 2009 at 4:00 AM

DaveH said…
Manny is wearing home whites and Carlos Ruiz is wearing road greys. Too many Dodgers fans behind home plate to be in Philly.
June 4, 2009 at 8:52 AM

night owl said…
Wow, this card is even more screwed up than I thought. You're right about the jerseys (I edited the post). But that does not resemble any Dodger Stadium that I know. Did they photoshop the wall?
June 4, 2009 at 11:49 AM

Bo said…
I don't think the background is another part of Dodger stadium, not behind home plate. After all, the fans back there would be obscured by the real ump. Topps must have photoshopped that background in from somewhere else.

night owl said…
Yeah, Bo, I think you're right. I was going to mention that in the last comment -- the background is from another photo entirely.
June 4, 2009 at 12:52 PM

Andy said…
To me, it's impossible that this was an accident. I wonder why Bowman chose to make the mistake on a star card instead of a lesser-known player. I suppose it's a time-tested method, though, and errors on star cards generate more buzz.

Motherscratcher said…
That is fantastic! I doubt I ever would have noticed that.

night owl said…
Yeah, Andy, it's no accident (although not sure about the leftover ump leg). The corrected error card is kind of a thing of the past, as far as I know.
June 4, 2009 at 2:24 PM