My last day of doing what I want 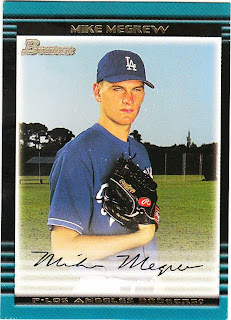 Another vacation week has come and gone. This is my last day of doing what I want, so I'm going to do what I want and post cards from some trades.

But first a brief vacation recap: Snow. Wind. Can't see 2 feet in front of me.

Through it all, the good mail carriers still delivered card packages to my door. I haven't posted the contents of those cards yet, because I'm still working on the cards that arrived pre-blizzard. These cards are from the one and only Spastik Mooss of The Great Sports Name Hall of Fame, and Brian at Play at the Plate.

I'll start with The Mooss' cards. 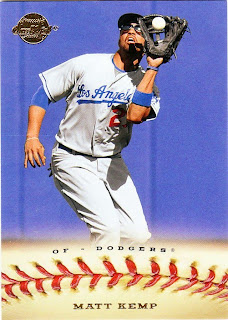 First, here is my first 2009 Sweet Spot Dodger card. I saw it on the GSNHOF site and instantly claimed it. It's a nice-looking card, but there is no way I'm putting down 30 bucks for one of those Sweet Spot tins at Target. I heed the warnings posted on the internets. Well, sometimes. 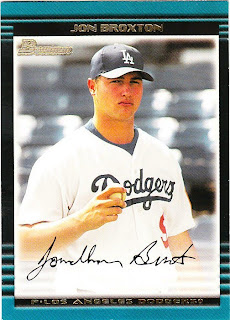 A very early card of the Dodgers' current closer, Jonathan Broxton. So early that they hadn't added the "athan" onto his name yet. I know what you're asking, "is this his rookie card?" I don't know. And you're not going to make me do any work and look it up. I'm still on vacation, dammit! 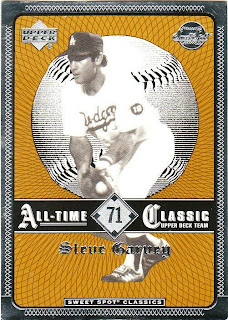 Silver-foil disease has ravaged this card, even though all Garvey cards are cool. This photo was taken during the 1978 season, as you can see the No. 19 patch the Dodgers wore in honor of Jim Gilliam that year. 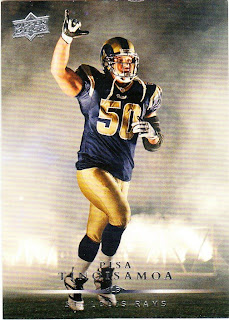 Wow. A football card. Do you know how long its been since I posted a football card on this blog? A long time. This could be a night card, although I suspect it's just pregame ceremonies inside the Edward Jones Dome in St. Louis. Photos inside that dome are exceedingly dark and dreary. No wonder the Rams never win.
Also, I find the setting off of fireworks inside, semi-disturbing. I have a pyrotechnic specialist in the family, who could set my mind at ease. He's a huge football fan, too, so I'm not sure why this conversation hasn't come up yet.
Tim, those are some super fine cards. Much appreciated. 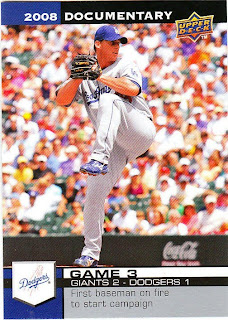 Meanwhile, I am posting cards that Brian sent two separate times. He's a prolific mailer, and even after this post, I still will not have posted all the cards that he has sent the last couple of weeks.
The first group of cards are some Documentary Dodgers. Yeah, Documentary. But I asked for them. Because there's some stupid side of me that wants all 162 Dodgers cards from the set, so I can see what it's like to see the same photo of Chad Billingsley 17 times.
The best part of Documentary is figuring out if the photo and words match up with the game. Most of the time they don't. But it's fun! Try it at your next party. Oh, hell, we're going to try it now.
We'll start with the Billingsley card. The card shows Billingsley, mentions a first baseman, shows a Giants victory (bah!). But the back write-up is about James Loney (the first baseman). Billingsley didn't even start. He pitched one-third of an inning. 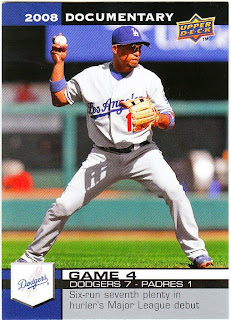 Next card: It shows Rafael Furcal, mentions a pitcher's major league debut and a Dodger victory. When you turn to the back, the write-up is about Hiroki Kuroda. No mention of Furcal. He was 2-for-4. But he did have four assists! 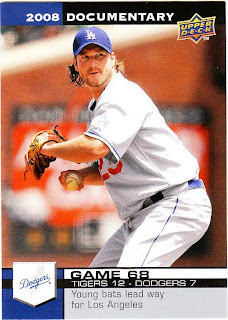 Last one: A picture of Derek Lowe pitching in San Francisco. Wow. I believe every photo of Lowe pitching for the Dodgers was taken in San Francisco. This was a Tigers victory, too, so the Giants have nothing to do with this game. The write-up mentions "young bats," and when you turn it to the back you'll read about Matt Kemp, Loney and Andre Ethier. You'll also note that Brad Penny took the loss in this game. And Lowe didn't even pitch. 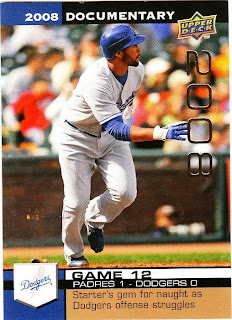 Fun, right? Here's your reward for getting through all that: a gold Documentary card of Matt Kemp. Brian sent eight Documentary cards in all. With the eight-or-so I have already I'm only about 140 cards away from the whole set. That's reachable, right? Good for Upper Deck, setting some challenging goals. It builds character. Or resentment. 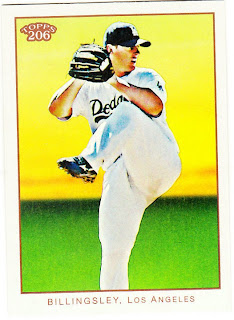 Moving on to some present-day stuff. Here is the T206 that certain bloggers enjoy quite a bit. You've seen it all over the place. People are completing pages, completing sets. Meanwhile, it has yet to make an appearance anywhere near me. I finally looked after 3 weeks of viewing this stuff on the blogs. Still not here.
I don't care really, because I can't get into the tobacco-era retro sets that much. A&G is the exception. But other than that, Goodwin and Turkey Red and T206 is only mildly appealing, and that's as far as I can go. 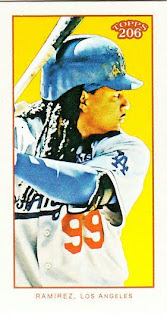 More minis. A Manny mini. I'm starting to have storage issues with my many minis. I need to order some custom pages. The LVINOH recommends that I do so. 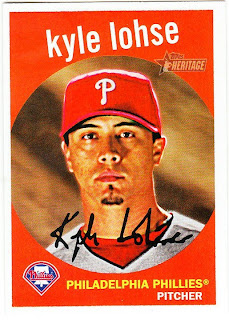 Brian is always looking out for us set-collectors. Here is a 2008 Heritage card I need. I went months without picking up an '08 Heritage card. But suddenly I've gotten a few, and there is new hope that I'll complete this set before my daughter graduates from college. 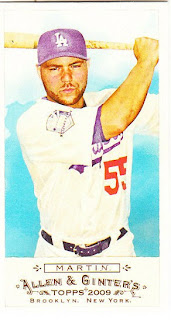 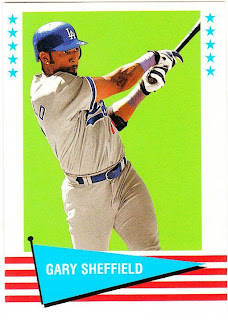 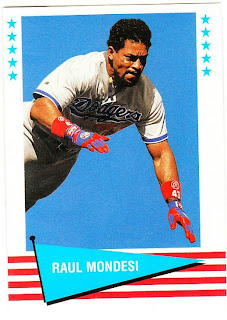 These are cool. I just came across these Fleer Vintage '61 cards while updating my want list yesterday. (I'm finally into this decade on my want list, although these cards are from 1999). And I realized the only two Dodgers in the set just arrived at my doorstep! Cool. 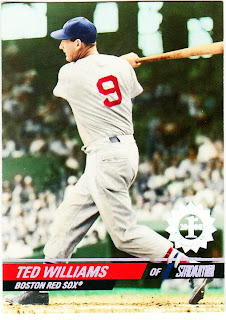 Another set that will not end. Here is one of the '08 Stadium Club short-print cards that I needed. Ted Williams means more to me than any non-Dodger old-timer, so I like this card a lot. 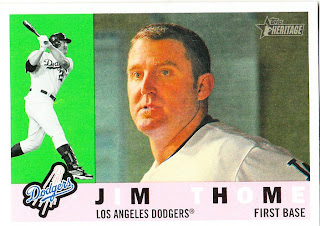 Final card: Jim Thome as a Dodger! Yaaaaaaaaaaaaaaaaaaaaaayyyyyy! Heritage High Numbers just arrived in my neighborhood this week, so it's nice I don't have to hunt for this card.
You could argue that Thome was airbrushed into the main photo, but I don't believe he is. And it's a perfect photo, because that's basically what Thome did when he was a Dodger: stand in the dugout and stare out at the field.
That's it for now. I'm off to do what everyone does during their last day of freedom: eat stuff that's not good for me.

gcrl said…
i think that's the same thome photo from a getty gallery that i used for the goose joak project so it's a good bet there's no airbrushing.

1) Best I can tell, that is Broxton's rookie. 2002 is the farthest Beckett goes back for him (Jon or Jonathan), and the only cards from then are an UD Premier card and the different Bowman variations (chrome and whathaveyou). I picked up two, one for you, one for me haha.

2) The McGrew card was actually hidden inside a sleeve with one of the Broxtons. I didn't notice until I left the store, and then I didn't know what to do with it. He's a Dodger though, so I sent him your way haha.

3) Aw man, that's true about the football guy. I just was like whoa...darkness...explosions...craziness. But I'm glad it got fireworks into your blog, so all is well.