December 13, 2009
I gave the desk downstairs a long-overdue cleaning Saturday. The top of the desk features some of my baseball card binders, mostly the newer stuff. It also features all of my card-mailing instruments: top loaders, penny sleeves, bubble mailers, markers, labels, you name it.

But the reason I was cleaning it is because the desk drawers are loaded with stuff that I don't really need anymore. One holds newspaper sports sections that I've produced. Another holds a variety of things, such as old Sports Illustrated articles, high school alumni newsletters, baseball magazines, and random notecards.

The middle drawer holds "grown-up stuff": health care information. Changes in work policies. Quarterly updates on retirement plans/investments, etc. The handle on that drawer is busted, making it difficult to open. But I don't care, because I don't like opening that drawer very often.

However, I opened that drawer Saturday to see if there was anything I could trash. And then I spied something resting on the left side of the drawer. It was a small stack of baseball cards, residing in a place where no baseball card should.

"How the heck did they get in there?" I thought.

The cards -- no more than a dozen -- were from a box of random cards Dave of Tribe Cards sent me months ago. I apparently had selected a few that I wanted to save, and then promptly forgot about them.

They were nothing special. A 2001 SP Authentic card of Magglio Ordonez. A 1988 Topps Big Baseball card of Frank White. 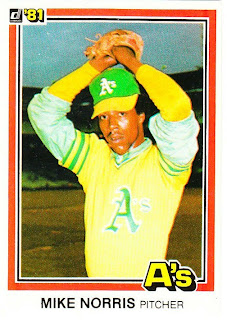 This entirely awesome night card of Mike Norris from 1981 Donruss. Shine on you crazy diamond. 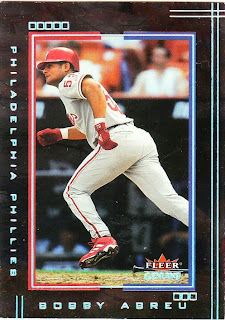 And this 2002 Fleer Genuine card of Bobby Abreu. I love '02 Fleer Genuine because of the stained-glass effect on the border and the gold foil over it. Classy. I have no Dodgers from this set, and that needs to be rectified immediately.
But somehow, and I have no idea how, I had placed them amid folders stuffed with 401K statements, old doctor's bills, and vitamin information. Weird.
Now, I know what you're going to say. If I stopped this post right here, there would be a comment that said: "That's nothing. Once, I put a baseball card in my shoe and walked in it all day long, and didn't know it was there until I took my shoes off at the end of the day."
That would be followed by another comment that said, "I once buried baseball cards in my backyard, and forgot I did it until the dog dug them up four years later."
But you don't understand: I never misplace baseball cards. Never. Oh, I forget which cards I have. I do that all the time. I've posted cards on this blog that I thought were new to me, only to realize that I had them already. That's happened a few times.
But my actual card-placing abilities are beyond reproach. Or so I thought.
Quite some time ago, Dinged Corners posted about how they had stumbled across a five-week old card package while cleaning the van. There it sat. Untouched. For five weeks. Unknown to them.
I read in disbelief. And then I read other blogs that mentioned something similar happening to them. This was all foreign to me. All of my cards clearly had a known place of residence. I charted their whereabouts at all times. Latitude and longitude. If they were going to be out later than 10 p.m., they knew to call me.
Until now.
Now, I'm as flighty as everyone else. I mean, I knew that already. But now I know I'm as flighty about BASEBALL CARDS as everyone else. And that's new to me.
I'm checking every seat cushion in the house tomorrow.

First Norris gets abused by Billy Martin until he can't lift his arm, then you callously lock him away with documents you resent.

I notice the cards look mint though. Even the bizarre you is quite diligent and organized.
December 13, 2009 at 5:55 AM

Anthony K. said…
I am ALL about knowing where my cards are at any given time.

I'm actually quite OCD about the whole get up.....but I have been known to misplace a stack or two from time to time.

I know how you feel.

If you need to talk, sessions start at 3 night time cards per half hour.