The next badass (and it's still not who you think) 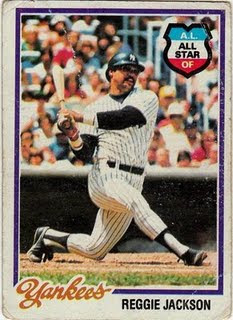 Poor Reggie. Will he ever gain entrance into the "I'm Badass and You're Not" Club? I can hear him outside the locked door now, whining.

Sorry, Reggie, I'm still not convinced. Maybe in a couple of years -- when I'm finally over all of the self-promotional stunts that you pulled during your career -- I'll induct you into the club. But, for now, Mr. Drink Stirrer, sit your non-badass down.

Folks claimed that Reggie Smith's career was overshadowed by Jackson's. I never saw it that way. First, just because two players share the same first name, doesn't mean you're required to compare their stats. Secondly, there was only one Reggie who I thought was bad-ass cool as a kid, and it wasn't Reginald Martinez Jackson. It was Reggie Smith.

Reggie Smith's actual first name is Carl. His middle name is Reginald. But in a true bad-ass maneuver, Carl didn't go by "Carl" growing up. He went by Reggie. Because "Carl" is not a bad-ass first name. My apologies to Mr. Erskine, Mr. Crawford and Mr. Yastrzemski. It just isn't. 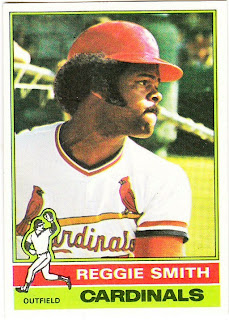 This 1976 Topps card is what made me want to follow this badass for the rest of his career. Smith was in mid-career by 1976, having played for the Red Sox for his first seven seasons and appearing in a World Series in his first year in the majors. But his badassness was all new to me. This card brought it home. The Afro, the sideburns, the batting helmet, the vein bulging from his neck, the piercing stare.

I immediately wished he played for the Dodgers. And in one of the few documented cases of an 11-year-old's wish coming true, he did become a Dodger a few short months later. 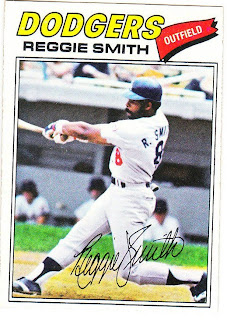 The Dodgers traded Joe Ferguson and a couple of minor leaguers who amounted to squat for Smith, who settled into right field to play for L.A. for the next seven years.
Smith had all of the necessary badass attributes on the field. He was a power-hitter, but he hit for average, too. He had one of the best outfield arms in baseball, and there is almost nothing else that registers higher on the badass scale.
In 1978, Smith actually indirectly created a fight between teammates when pitcher Don Sutton claimed that Smith was more valuable to the team than Steve Garvey. Garvey and Sutton then began rolling around the floor. An actual fight over the level of Smith's badassness! That is badass in itself. 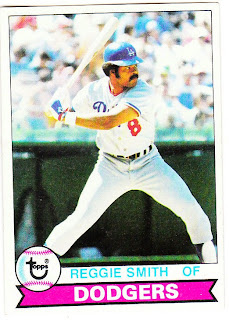 But my favorite fight involving Smith came in September of 1981, one month before Smith and the Dodgers would win a World Series. During a game in Candlestick Park, some Giants fan -- no doubt frustrated by his disastrous choice of a favorite team -- began heckling Smith.
The fan said Smith stunk and had "no class." Smith, as any sensible person would, responded with "What does that make you, talking to me?" Classic. The fan responded by throwing a batting helmet at Smith. Another classy move. Smith immediately jumped into the stands and began pounding the fan.
Smith was ejected, but the fan was arrested, jailed and hospitalized (not necessarily in that order). And he had another reminder of why it sucks to be a Giants fan. 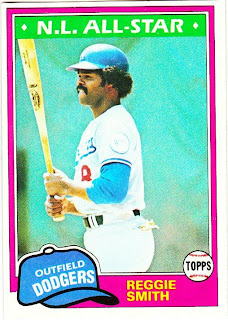 Not long after that, Smith made the inexplicable decision to play for the Giants, signing as a free agent for the 1982 season. Even though I was upset, it was the true mark of a badass. No badass lets others make his decision for him. A badass makes his own rules.
It didn't take long for Smith to realize that the Giants weren't for him. He played there one year, then took off for Japan to play before retiring. He later came back to the Dodgers as a coach and hitting instructor, but never admitted he was wrong for playing for the Giants. A badass does not apologize or make excuses.
Smith runs his own baseball camps now. I like the baseball card display on his web site. He also was the hitting coach when the U.S. upended the heavily favored Cubans and captured the gold medal in the 2000 Olympics. Again, a badass doesn't listen to what's right or wrong, or who should win or shouldn't. He just goes out and does it.
So, welcome to the club, Reggie. You are the fifth member of the "I'm Badass and You're Not" Club. I'm also making you the bouncer. If any Giants fans come by, you know what to do.

Motherscratcher said…
I don't know much about Carl, er, Reggie...but he sure seems pretty badass.

Except for his web site. Everyone knows that you lose badass points if you have a website with baseball cards on it, right?

Dean Family said…
Reggie Smith was also the technical adviser on the movie *61 making the actors look as if they could really hit.
December 14, 2009 at 9:32 PM

Field of Cards said…
In the 1977 World Series Howard Cosell referred to Reggie Smith as the second best switch hitter in the history of baseball.

Is Dick Allen in the Badass Club yet? I think that dude is one of the best badasses ever. Costas has an interview with Allen on Tuesday night (MLB Network). Should be great.
December 14, 2009 at 9:35 PM

reggie took his bad-assedness with him to japan, that's for sure.

i have a post about reggie (and 3 other dodgers) going tomorrow, plus another one in a couple of weeks centered around that 1976 card. he was definitely one of my favorites from those teams of my youth.
December 14, 2009 at 10:17 PM