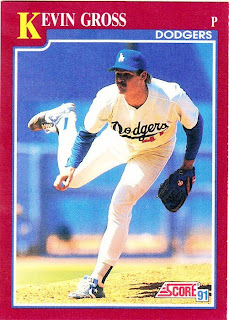 To me, cards from 1991 are like a song on the radio that you have heard at least 40,000 times and never want to hear again. 1991 Fleer is like "Boys of Summer" by Don Henley, and 1991 Donruss is like "Eye of the Tiger" by Survivor. Whether overproduced or over played, they all need to find a place to disappear.

This time, I was reading a post by Steve at White Sox Cards. He was lamenting how he can always find White Sox needs from 1991 even though it was probably the peak of the overproduction era. As I read the post, I nodded in agreement. Steve purchased the entire 1991 Score Traded set because he needed some White Sox out of it. And I understood.

I knew that I also needed most of the Dodgers out of set. The only one I had was the Kevin Gross card up top. I felt myself reluctantly typing a comment, admitting that I needed some '91 Dodgers. Then I waited a few minutes to see if the card collector police would break down my door and take away my collecting badge.

Shockingly, I still have my badge.

Almost as shockingly, Steve sent me all the Dodgers from the set in a matter of a couple of weeks. There was the Gross card again, and this: 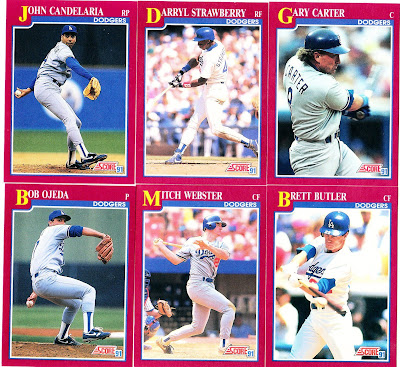 I don't have fond memories of most of these guys, because the early 1990s was a lousy time to be a Dodger fan. But I am happy to polish off some 1991 needs, as embarrassing as it is to say that I need cards from 1991.

I know there are still '91 Dodgers needs out there. A couple Stadium Club cards. A couple Bowman. More than a couple Classic cards. But I long for the day when I won't need a single '91 card.

Steve also sent a few other Dodgers to balance off the '91s. Here are a couple: 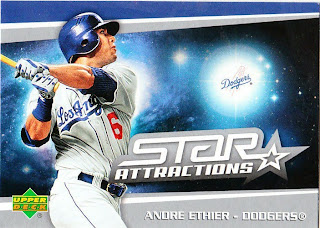 An Upper Deck '06 insert of the Dodgers' MVP last year. 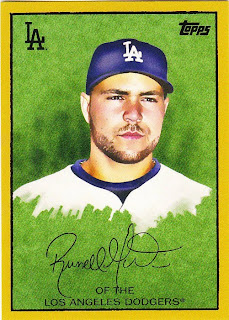 And one of those 2008 Topps 400 insert things of Russell Martin. Don't like these cards that much, but I'm glad to have this finally.
As for 1991s, I hope the day exists in the near future when I won't want a single card from that year. The remaining Dodgers are in sight, and as far as set needs, I already finished off the underappreciated '91 Topps set.
But I have no interest in the other sets, Fleer/Donruss/UD/Score, etc. When I see them, all I can hear is this.

cynicalbuddha said…
Wow I've always said that this was my least favorite year of all time for sets. I still have a super monster box in my parents basement some where chocked full of 91 score. But I did manage to pull and 1990 Chuck Knoblaugh auto rookie from all those packs. I mean that was huge back then. I would have to say topps had the best set that year but look what it had to compete against.
December 3, 2009 at 9:26 PM

Steve Gierman said…
Glad I could haunt you.