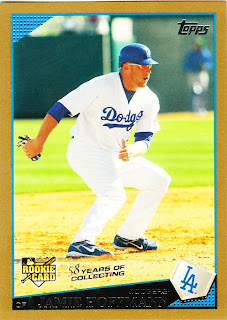 I received a card package to end all card packages yesterday. And given the generous packages I have gotten in the past, that is saying something. But I'm not going to reveal it now. All I'm going to say about it is this: it contained more than a dozen AU/GU cards.

Yeah, I know. And that isn't close to the whole story. But you're going to have to wait on that one, because I still haven't gotten through the packages that were sent before Thanksgiving. And if there is one thing you may have gleaned from Night Owl it is that Everything. Must. Go. In. Order. Or. The. World. Will. Spin. Off. Its. Axis. Into. The. Great. Abyss.

Fortunately, two bloggers known for their generosity sent me cards during that period. So I can stay with the whole generosity theme and no one will need to take any sedatives.

I am combining the two packages into this one post in a futile effort to catch up. The first set of cards is from Dan, box breaker host and owner of Saints of the Cheap Seats. The second set of cards is from the man currently on the worst blog hiatus in the history of the world, Matt F. of Heartbreaking Cards of Staggering Genius.

So sit back and enjoy some sweet Dodgers. Dan's up first: 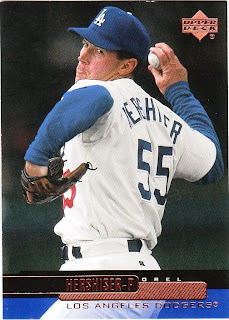 Here is Orel Hershiser's Upper Deck farewell from 2000. He dressed up in Dodger blue for his final season, Upper Deck was nice enough to go with a blue theme, and everyone bid Orel adieu as he walked into the sunset. 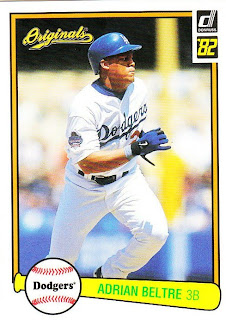 Donruss Originals was an OK idea, I guess. I was never impressed with many of the Donruss designs, 1982 included, so it doesn't do much for me. 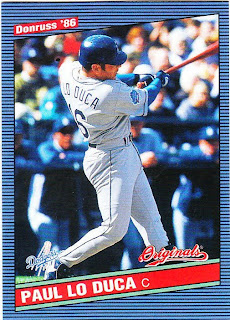 Here's a better example of my issue with Donruss. A tribute to the 1986 set. Yechhhh. 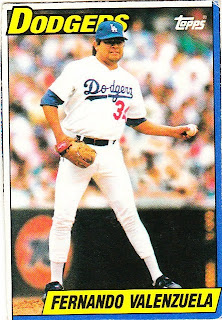 Dan sent me a couple custom-made 1990 Topps Dodger cards. Someone apparently had an issue with the Lichtenstein-like borders. 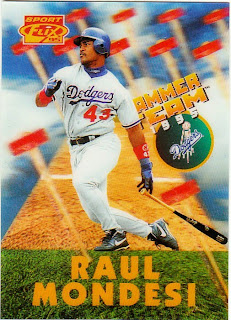 Mid-90s Sportflix were so weird. A row of sledgehammers floating in the background. Whaa? 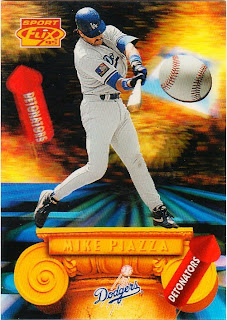 Another one. Piazza balancing on a pillar with firecrackers hovering above and below. It feels like I'm in an art gallery, and I need an interpreter by my side as I look at the paintings. 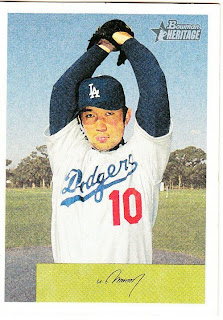 Here we go: a classic Bowman design with Hideo Nomo as the subject. This I can comprehend. 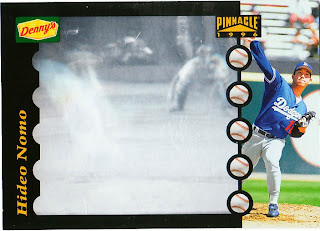 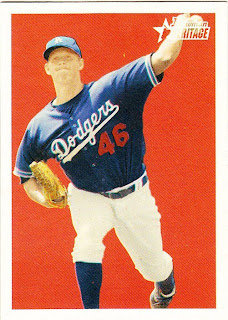 I'll end Dan's package with a 2006 Bowman Heritage Clayton Kershaw card. This might be from some prospects set. I'm not sure. Bowman seems determined to confuse the hell out of every collector. 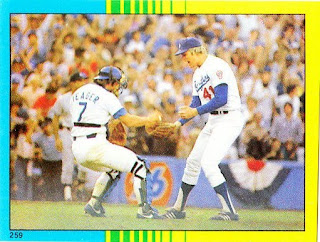 This sticker begins the cards from Matt. I expressed my everlasting devotion (or something like that) to this same sticker on Heartbreaking Cards, so he sent it along!
This photo depicts the Dodgers' celebration after winning Game 5 of the 1981 World Series against the Yankees. Great game. Jerry Reuss pitched a complete game, a 2-1 victory. A complete game in the World Series. They'll never let that happen again. 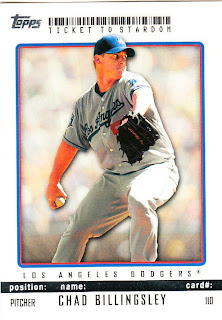 I think someone needs to test the mental competence of whoever came up with Ticket to Stardom. What a cavernously dull set. Happy to have the Billingsley card. Sorry it has to be so boring. 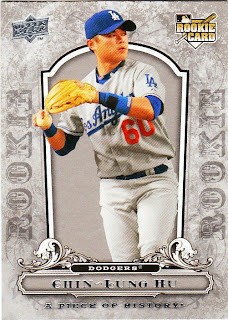 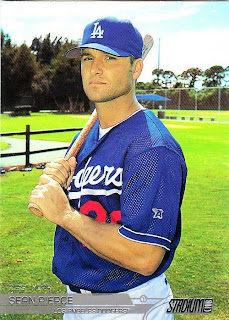 I think this is when Stadium Club decided to hang it up for awhile. When they realized they were posing players next to what appears to be a minature golf course, they knew it was time for a break. 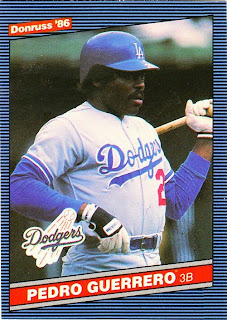 Here is the real thing as far as 1986 Donruss. I can't imagine what it's like to have an entire set of '86 Donruss in a binder. If you stare directly at an open binder filled with '86 Donruss do you go into convulsions? 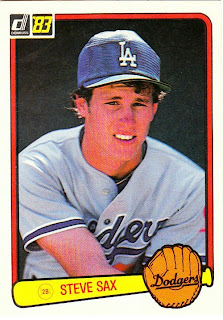 Steve doesn't appear to be wearing a regulation cap. It's too high in the back. ... Also, I need way too many '83 Donruss Dodgers. 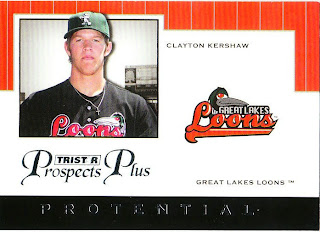 OK, go ahead and say it: "Clayton Kershaw is a loon." But that loon is going all the way to the Hall of Fame. 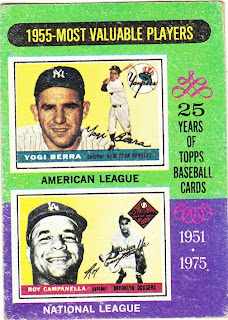 Card packages that include 1975 Topps cards are fantastic fun. That Campanella "card," by the way, was created for this MVP subset. Campy didn't appear in the 1955 Topps set. He was only in Bowman that year. 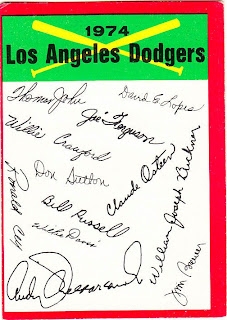 Finally, I am ending with an off-center checklist. That is because I needed this card for the 1974 Topps Dodger set. However, I never put it on any want list. Yet, somehow, Matt knew that I needed it. Hiatus, my Asselstine! He's working too hard over there for that to be a hiatus.
A big thanks to both Dan and Matt, each tremendous traders. Now, if you'll excuse me, I have to attempt to collate the greatest card package ever.

Anonymous said…
Actually, staring at a binder full of '86 Donruss will cause you to travel through time (backwards or forwards, depending on whether you're paging through from right to left or left to right, respectively).
December 6, 2009 at 9:58 PM

Mark Aubrey said…
Nice cards. I should have sent my box to you earlier. Other bloggers have set the bar too high.

Walked into the sunset? Ran to the poker tables is more like it.

Play at the Plate said…
I recently received the 74 checklist from the same source...awesome little card that.
December 7, 2009 at 12:58 AM

Matt Runyon said…
I really like those '74 team checklist cards. They did it right that year --- team records on the back of the team photo card and the checklist on a separate insert card.
December 7, 2009 at 11:49 AM

Anonymous said…
Oh if only I had the photoshop skillz to turn that Mondesi card into a LeBron James. Akron Hammer 4-Life! Bwahahaha...
December 7, 2009 at 9:27 PM