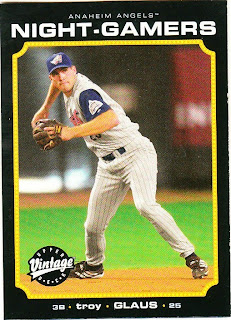 When I left the card-collecting world after the 1993 season, foil-stamping and holograms were the latest thing.

But that was just the beginning. I missed a lot during my collecting dark period. From 1994 through 2005, while I was attending to other matters, collectors who stayed behind witnessed a lot. The birth of chrome. Die-cuts and dufex. Cards became shiny. Parallels became commonplace. Refractors blew up. Old players appeared on new cards, and new players appeared on old-looking cards.

Some of it I'm sorry I missed. Other innovations I could do without. But the one set that I can't believe appeared when I wasn't paying attention is the Upper Deck Vintage Night Gamers insert set in 2002. How could UD do that to me?

This set was made for a night owl like me -- from the night-game topic to the black borders -- but I didn't even know it existed until I started blogging. Since then, some alert traders have sent me some of the cards from the set. I have no idea how many cards are in the set, and I don't have much better of any idea of the reason behind the set.

The cards that I own each mention on the back how that player performed in night games during the 2001 season. Some of the players are shown in night games, like Troy Glaus here (which team is Glaus on now? Which team is Scott Rolen on now? I'm glad they were traded for each other a couple seasons back, because I was beginning to think they were the same person).

But there are other cards that I'm not so sure about. 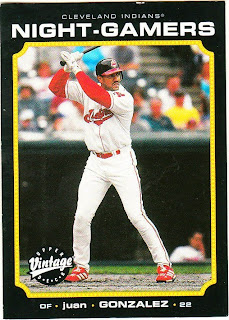 This might have been a night game. It's hard to tell.
But if I found out that all of the photos were definitely night games, then I'd have to collect the entire set. Aside from chrome and blue refractors, it's the best thing I've found from when I wasn't collecting. It beats the pants off some of those wacky die-cuts any day.

I'll refer you to the Zistle page for the Night Gamers subset of the 2002 Upper Deck Vintage set.

From their information it would appear that there are only 12 cards. I don't have my SCBC handy, but I'll check the facts on it later this evening.

According to the SCBC the Night-Gamers subset consisted of 12 cards and was inserted at the rate of 1:11.