Why I'm showing this card again 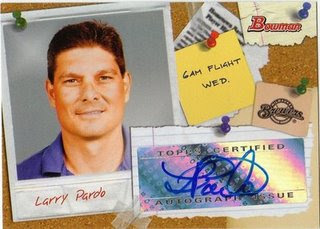 Scout Larry Pardo responded to my post here. He didn't like it very much. I can see where he's coming from. I called this one of the worst cards of 2009. He thought it was indictment of the scouting profession. He stuck up for his job. He belittled my blog. (Don't worry. Working in newspapers, I'm used to this stuff).

You might want to go back and read the comments. But if you're lazy, let me just say, like I did in the comments, that I have nothing against scouts or the scouting profession. Being a scout sounds like a great idea, just like sportswriting sounded like a great idea to me as a youngster. Unfortunately, much like sportswriting, scouting doesn't pay much, it involves long hours, and requires endless travel and time away from family. When I was around 12 or 13, I read Roger Angell's article titled "Scout," in which he followed around a scout for the Angels, Ray Scarborough. That article stayed with me. And since that time, I have had the chance to talk to scouts while covering various levels of baseball.

My post was simply a criticism of yet another series of non-player cards in a set of cards featuring baseball players. That's all. Mr. Pardo says he's honored to be in the 2009 Bowman set. I understand that. Perhaps if I wasn't pulling cards picturing microwave ovens or Fidel Castro out of packs so often, a scout card wouldn't bother me. It's all a matter of perspective. 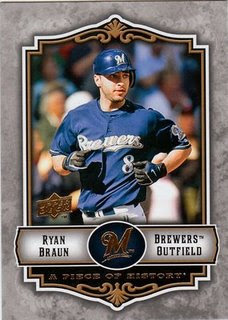 You also might be interested to know that Mr. Pardo says he did indeed get Ryan Braun drafted and signed by the Brewers. And the 2005 game mentioned on the card back, in which Ryan Braun fielded a ball hit by Juan Pierre, actually did take place. It was a spring training game in which Braun's University of Miami team played Pierre's Florida Marlins. (The confusing reference to "UAB's Juan Pierre" apparently was added after the fact. Mr. Pardo says some of his copy was edited).

So, yes, we do need to give Larry Pardo some credit for getting Ryan Braun to the big leagues. I'm sorry I compared his profession to ticket scalping, although it was done completely in jest. I hope he called me a moron in jest (but he probably didn't).

I'm not removing the card from the "Worst Card of 2009 Candidates" because it still is, in the eyes of this collector, not the reason I pay good money to buy cards. But at least Mr. Pardo helped me look at the card a little bit differently.

And, yes, it's a fine photo. Now, folks at Topps, can I get an autographed card of Ryan Braun?

Motherscratcher said…
hink it's unfortunate that Mr. Pardo took such offense to your post. It was obvious to me (and probably most of your readers) that the critcism was for Topps and mot Larry or scouts in general.

That being said, I probably got that because I'm a frequent reader of your blog. It makes me sad that Larry (who's probably a great guy) mistook the post enough to feel justified in calling you a moron. Which you are not.

Motherscratcher said…
Geez, I'm going to have to hire an editor for my comments.

Steve Gierman said…
I think it shows that lack of intelligence on someone's part when they take to belittle someone with name calling. Maybe it's just me, but when I'm provoked, my vocabulary actually gets better. I tend to use phrases like "shall not" and words like "shan't" and "scalliwag".

I can see that Larry thinks that you're abusing him, but one read of the post should be sufficient to show that you had no intention of that.
June 12, 2009 at 8:05 PM

Steve Gierman said…
Re-reading the comments section of the original post, I saw a more thought out and intelligent second reply from Larry. That was nice to see.

dayf said…
You were awfully nice to someone who called you a moron. Twice.

night owl said…
Like I said, I work at a newspaper. People say all kinds of things to people who work at newspapers. There's no need for both of us to get all excited.

AdamE said…
I think it is pretty cool that someone on a card found your blog. it makes me wonder if some players out there read blogs. Wouldn't it be cool to find out someone from your favorite team checks your blog to see what got wrote about him lately?
June 12, 2009 at 11:53 PM

zman40 said…
Man, I go out of town for the weekend and I miss all of the fun. I guess I should start doing a google search of my name more often and start berating people that post negative things about a former Penn State QB that shares my name.
June 15, 2009 at 12:36 AM

Unknown said…
Thank you for clearing things up.
I apologize for the Moron part.
To clear something further up, I never sent them a copy of the reports and I believe they got this stuff from a comment made at the press conference, who knows?
Now that everything is cleared up, Is their a prize for being on the worst card of 2009??
Thanks,
Larry
June 18, 2009 at 4:29 PM