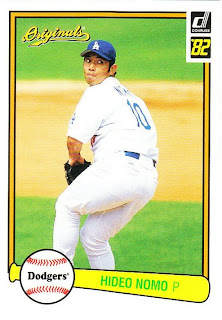 I really need to get to posting some of the cards that people have sent to me over the last two weeks. The cards are just sitting there, waiting for me to come up with a clever reason to post them. And they're dying on the vine, because I'm tapped out.

The holiday and work has been a drain. Creativity is at an all-time low. While people were kicking back over the weekend, enjoying family and friends, I worked Christmas night, Saturday night and Sunday night. Good times.

So, I'm not sure whether I'll get to all the fine items that were sent by you good people. But I'll tell you what I'll do. I'll at least show the Hideo Nomo cards. Because it would be plain wrong to skip his cards. Besides, I have professed once already that there's always room for Nomo.

After that, we'll see. Let's just say I will make a valiant attempt to show the other cards at a time and date of my choosing. 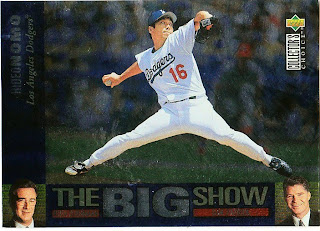 The card at the beginning of this post and this one are both from Daniel of It's Like Having My Own Card Shop. I know I am going to show at least one of the other cards he sent, because it's super shiny. But for now, these two will do.

The "Big Show" Collector's Choice card is fantastic because it shows Nomo in a very Koufax-like pitching pose. And it features the best Sportscenter anchor duo in the history of the world. I enjoyed Keith and Dan immensely. They were very creative. ESPN hasn't come close to anything like that again. In fact, now it's basically crap. But it used to be great. 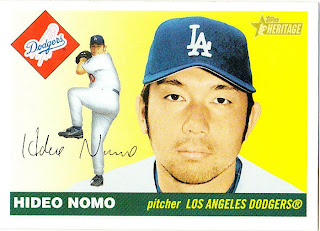 This 2004 Heritage Nomo card comes from Paul of Crawford Cards. This is Nomo as The Grizzled Veteran. He looks transfixed. It's a little unsettling. 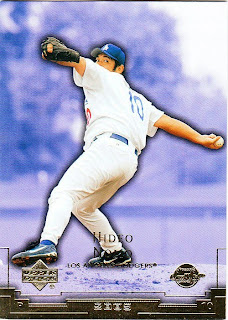 Derek of Hey, That's Mine sent this 2003 Sweet Spot Nomo card. I've never seen these before. The blued-out background looks like something from a mid-1990s Soundgarden music video. I don't think it's meant to look creepy, but it is. 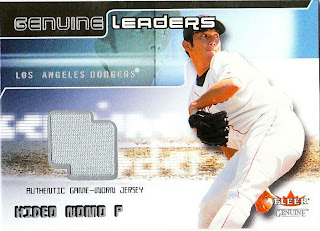 The final Nomo card is a very nice Fleer Genuine swatch card sent to me from Jim of gcrl. Fleer went to great lengths to hide the fact that Nomo is wearing a Red Sox uniform and cap.
But on the back it says that the card "contains a piece of authentic game-worn Boston Red Sox jersey, which was worn by Hideo Nomo, pitcher for the Los Angeles Dodgers."
Ah, yes. I understand completely. Logic is highly overrated, don't you think?
So, there you are. A very small part, a very Nomo-centric part, of several recent card packages. I will try to devote more time to these packages in the near future.
Meanwhile, I have yet another awesome package to feature very soon. It's not the Greatest Card Package Ever, but it is just about the next best thing.
OK, enough rambling. See you again after I've had some sleep.

zman40 said…
Those Donruss Origianls remakes were pretty cool. Unfortunately, I was barely collecting when they came out and I hardly have any. I know Donruss didn't have the history that Topps had, but any remake of a companies early sets are fine with me.

I Am The Average Joe said…
is that stretch on the UD Collectors choice card even possible? Damn!
December 28, 2009 at 4:36 PM