Welcome to my nebulous 9 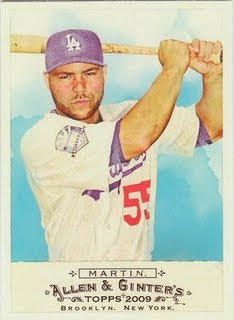 I have seen this done with great success here and here and here, and probably in a few other places, too. So I'm going to try one of my own.

I had reservations about starting my own version of the Magnificent Seven or Dirty Dozen -- a want list of my absolute most wanted cards. It's a hectic time of year, which puts a damper on my ability to make trades. Also, I'm hesitant to add another want list to my sidebar. If it seems that all I'm doing on this blog is opening the guitar case, playing tunes on the street and begging for cards, please tell me.

But here I go anyway, putting out my tin cup. I call this want list: the Nebulous 9. These are nine cards that I really, really, want. But I call it a "nebulous" list, because my view of which cards I really, really want (I'll have you humming that Spice Girls song in no time) changes constantly. I had to force myself to think about which cards should be on this list, and it was agonizingly painful to leave other cards off the list.

So it's a list. But it won't stay in its current form for long. It will shape-shift and morph. It may shrink to 7 cards or balloon to 12. It's fickle, and a wanted card today may be as intriguing as something from '88 Donruss tomorrow. I recommend checking for updates.

But for now, these are the Nebulous 9. Now what's your role? It's simple. If you have these cards, you send them to me.

1. Russell Martin, 2009 Allen & Ginter, #180: That's the card featured at the top. I pulled the card during the great Gint-a-Cuffs saga back in July and never pulled another. My Dodger binder is lacking this solitary A&G card. When the house is quiet, I can hear it sobbing. (Received! Thanks, Joe!) 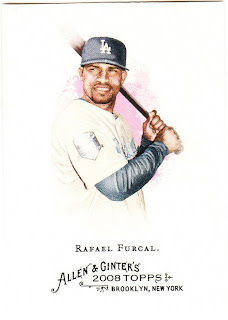 2. Rafael Furcal, 2008 Allen & Ginter mini, #299: The only Dodger mini card that I am lacking from the set. I don't care whether it's regular back or A&G back. I look at my cards for the pictures, not the articles. Well, that's not entirely true. But you better damn well have a picture.

3. Dodgers team, 2008 Heritage, #457: It's a short-print, and it took me a heck of a long time to find the card for my set-completion task (still working on that to this day. What a grind those Heritage sets are). But I need one for my Dodgers collection, too. 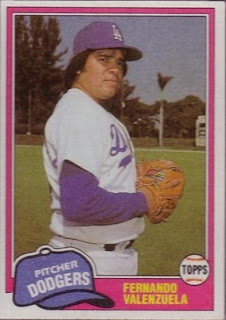 4. Fernando Valenzuela, 1981 Topps Traded, #850: The star of the first modern-day traded set. I've wanted this card for over 25 years. I'm not sure why I haven't bothered to seek it out. Laziness, I guess. That's my answer for everything.
5. Lenny Harris, 1991 Score, #144: Every time I admit I need this card, I can feel shame wash over me. How is it possible that there is a card from 1991 that I still need? There has to be over a million people that have at least 12 of this card. There is a guy in Antarctica who is burning a brick of '91 Score Harris cards for heat. (Received! Thanks, Captain Canuck!) 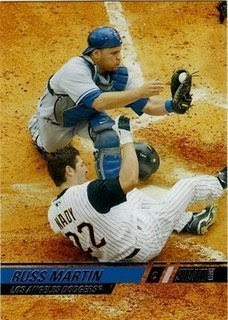 6. Russell Martin, 2008 Topps Chrome, #54: This isn't the card that I need, but the exact same photo is on the Chrome card. It's not as sharp as this Stadium Club card, but it's the last shiny Dodger I need from the Chrome set. (Received! Thanks, Play at the Plate!) 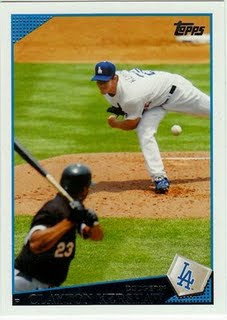 7. Clayton Kershaw, 2009 Topps Wal-Mart Black, #575: Picture this card with the background blacked out. The Series 2 Wal-Mart variation cards aren't as easy to find as the Series 1 cards, due to Topps screwing around with a good thing. But I know someone has this card and has no other use for it except to send it to me. 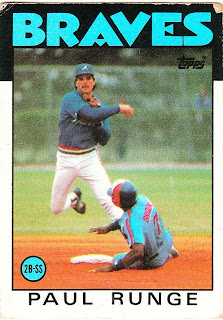 8. Paul Runge, 1986 Topps, #409: Don't laugh. The only non-Dodger on the Nebulous 9 is in crucial need of upgrading. Since my set of '86 Topps is in pristine condition (everyone in 1986 figured their cards were the most valuable items they owned, after all), this card stands out so much that it irks me every time I see it. (Received! Thanks, gcrl!) 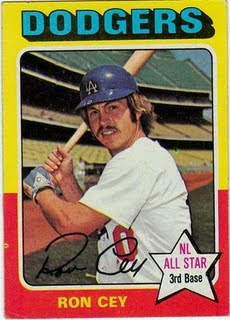 9. Ron Cey, 1975 Topps mini, #390: The card I want most of all (well, I'd be interested in a '56 Jackie Robinson or '65 Sandy Koufax, too). The '75 minis are the ultimate for me, and it pains me that I don't have one of my favorite player. My ultimate player on my ultimate card set? I could truly end my collecting days with this card. (Thanks, mr haverkamp AND gcrl!)
I would find something special for whoever might send this card to me. It might take me months to return the favor, but they would definitely be repaid.
While I'm at it, there are a few other Ceys I need that are not on the nebulous list (but ARE on my much bigger, industrial-sized want list). 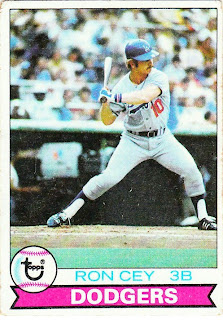 The 1979 Topps Ron Cey is the last Dodger card I need from the '79 set for my Dodger collection. Except for the '73 card that Cey shares with Mike Schmidt, and the '75 mini, it is the only Topps Cey card that I'm lacking for the Dodger binder.
But there are several other Cey cards that I'd like to have. 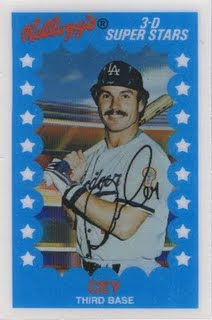 There is a Kellogg's card from 1982 that I need. And there are Hostess cards of Cey from 1975 and 1976 that I need. I believe the '76 one is a short-print card, which seems bizarre to me, that a food issue card from the '70s would be short-printed.
And that closes out The Nebulous 9. I left off a number of other cards that I need to complete sets, like the 2002 Jim Tracy Topps card and The 2007 Eric Stults Heritage card, and the 1996 Hideo Nomo Donruss card. But you may see those cards on the list soon. Because I can never limit any want list. In short, I want it all.

Collective Troll said…
Senor Owl... Crap, a few minutes late... I had the Kellogs Ron Cey waiting to go in your next shipment... I may have the 79 Cey and a couple others from your extended list, but none from the Nebulous 9. I dont know why that Ginter card #180 is so elusive. I still have like 4 copies of some short prints (and they all seem to be Royals, Rockies or A's) but haven't pulled a second one of that yet...
December 1, 2009 at 11:53 PM