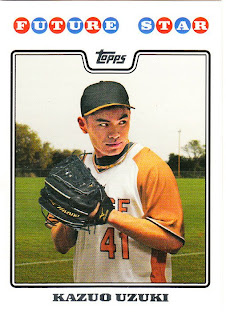 Way back in the winter of 2008 when Stale Gum and Wax Heaven were first revealing this gimmick card to the collecting public, I simply stared in wonder at what our collecting hobby had become.

I was still getting back into collecting. I didn't have a blog in the winter of 2008. In fact, I wasn't even looking at card blogs then. But when I started reading, in June of 2008, I went back through several bloggers' files (none more so than the defunct Baseball Card Blog) and read some interesting stories, including the Uzuki story.

Now, Ben's Baseball Card Blog is retired, as is Dave's Fielder's Choice. Chris still posts on Stale Gum but not like he once did. And Mario has announced the end of Wax Heaven.

I admit, I received all my card news from Wax Heaven, and maybe a random post at Cardboard Junkie, Sports Cards Uncensored, Trader Crack's, or one of the other news-based card blogs. I receive none of it from Beckett's. I just can't deal with the site. It's too self-promotional, too annoying, and features way too many things I couldn't care less about. Once in a great while, I'll watch one of their videos when they're busting a box of new product. But I haven't done that in a long, long time.

I guess what I'm saying is when Wax Heaven departs, where am I going to go? Don't make me go to Beckett. I'll immerse myself in nothing but vintage before a daily diet of "the number one source ..." (*gag*).

I'm hoping that the card blogs I just mentioned, along with a few others, can pick up the slack. But I won't be throwing myself in there. I just don't have the time nor the interest. I've never been at the forefront of anything. Evidence of that is in the card at the top of this post.

That is my first gimmick card. It took me almost two years after news of this card broke for me to possess it. I've never pulled the Mantle/Bush/Jeter card or the Giuliani/Red Sox card or the Smoltz Heritage card or the squirrel card. And I've certainly never sought them out.

I got it for free. It came in a box of Dodgers from reader Noah, who has traded with me before, along with a few other bloggers. I chuckled when I saw it and threw it back in the box. Yesterday's sensation is today's freshest item on the scrap heap.

What I was really interested in were the Dodgers. Noah always sends some great ones. Here is a sampling: 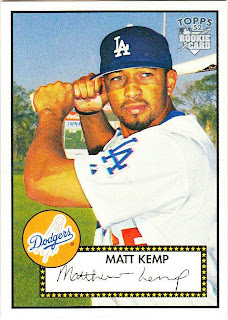 One of THE key cards from the 2006 Topps '52 series, as far as I am concerned. I can't wait to see what is in store for Kemp next season. 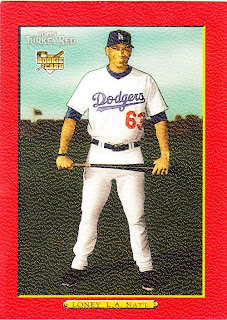 Another 2006, this the red border variation Turkey Red card of James Loney, who is wearing the odd-looking No. 63 uniform number here. 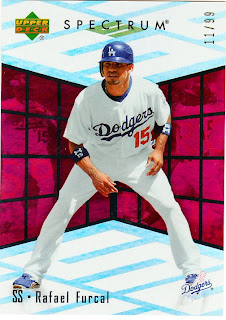 A numbered Spectrum card from 2007 of Rafael Furcal. Very futuristic. It's not as semi-revolting as current Spectrum cards. 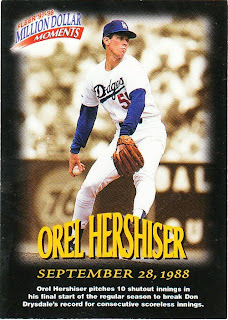 Another Orel Hershiser card that I didn't have, this from the Fleer millions promo things from the late 1990s. This looks so much better than the Andruw Jones millions card that I had in my collection for years. 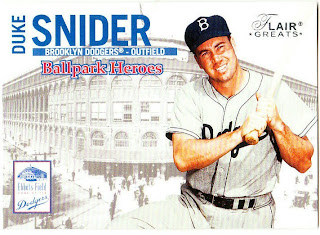 I just saw this card autographed on My Pastime ... I Love It! It looked great. I should drop this in the mail to Snider and do the same. 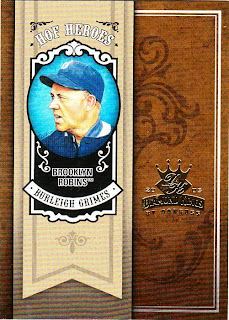 I really like cards of ancient Brooklyn Dodgers (despite the insanely tiny photo). Send all those Grimes card my way. Same with Zach Wheat, Dazzy Vance and Jake Daubert (although you'd really have to hunt for a Daubert card). 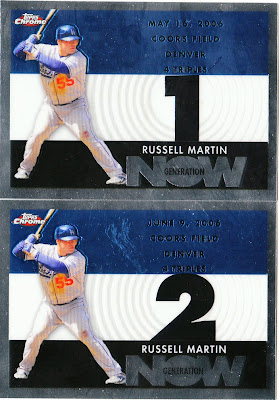 Is it worse that they chromed up these Generation Now card or the Mantle HR history cards? I'll go with the latter. 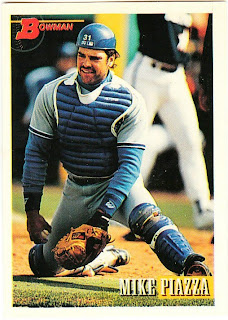 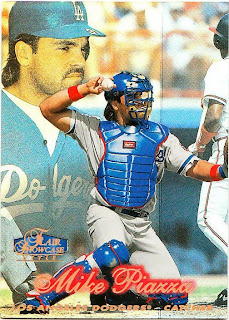 More Piazza. This time, there's a giant Mike Piazza rising out of the ground to greet the Braves batter walking back to the dugout. Weird. 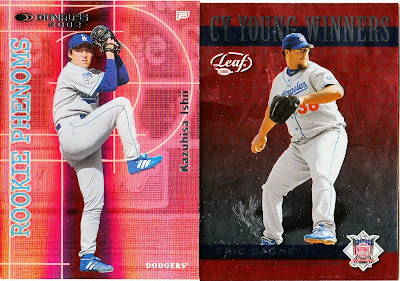 Noah sent several Eric Gagne cards. I've paired them up with other players, in case you're irked by the whole HGH thing. This time he's next to an extremely shiny Donruss insert card of Kaz Ishii. I like that card a lot. 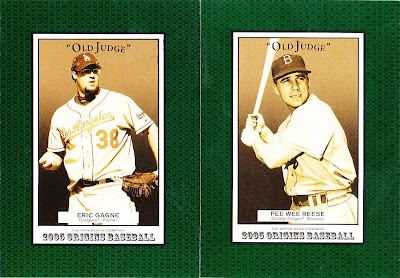 Here Gagne sits next to a Hall of Famer. This Upper Deck Origins border reminds me of the wallpaper in my eye doctor's office when I was a young boy. Yes, that's a very specific memory. That's what you get from me -- not breaking card news. 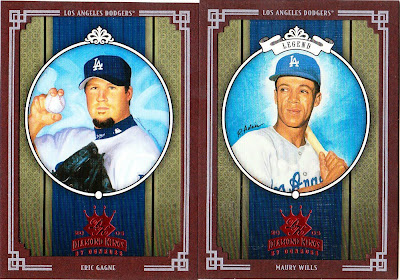 Gagne next to a guy who should be in the Hall of Fame. I never knew Donruss put those raised borders on its Diamond Kings cards. It kind of takes away from the novelty of the Upper Deck Masterpieces parallels. Upper Deck seemed to do a lot of creative stealing in the last decade. 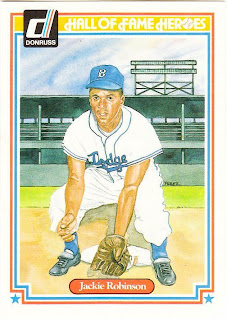 Last of all, two cards of Jackie. I believe this is the last Dodger I need from that 1983 Hall of Fame set from Donruss. 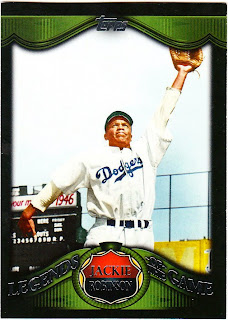 And here is one of those 2009 Wal-Mart/Target Legends of the Game Robinsons. I've lost track/interest in which store has which color, photo, blah, blah, blah.
Great stuff again, Noah. And only one gimmick in the bunch.
And best of luck to you, Mario in whatever you do.

NMCLax24 said…
Wow! Good thing I read this post, I had no clue that the Uzuki cards was special. The card is currently in my pile of cards available for trade, not any more.
December 5, 2009 at 2:23 PM

oldschoolbreaks said…
It looks like the Braves batter is having a nasty staredown with a giant hologram Piazza. Gotta love old Flair Showcase! That Duke would look great with a TTM sig (for once, I don't have any to send you lol).
December 5, 2009 at 2:34 PM

Anonymous said…
Nice Grimes card. I've taken a liking to Burleigh because he is one of three hall of famers from the state of Wisconsin.

Captain Canuck said…
Mr Night Owl, fret not. In my blogger feed there are 156 card blogs. And those are just the "blogger" ones, not including the wordpress blogs.
When there is news, it is usually reported by no less than 30 blogs long before ever appearing at wax heaven.
My point is, you'll still get your news... and not have to deal with beckett either.
December 5, 2009 at 5:38 PM

Spiff said…
Thanks for the information on Wax Heaven. I hadn't been over there since a certain post in August and had no idea he was closing down. Sorry to hear he is having a tough time.

I agree with the Captain though, you'll be able to stay informed without Beckett or Mario.
December 6, 2009 at 7:11 PM

Anonymous said…
Oh yeah, Diamond/Gridiron King framed parallels came way before UD Masterpieces. I pulled a gold (which oddly enough have a black frame) Roberto Clemente from a pack of 2002 Diamond Kings. It's pretty beat up at this point, but still one of my coolest (and coolest looking) pulls. And I definitely remember raised border-type basketball cards from 1995-96 when I first started collecting, though I can't remember who made them.

Come to think of it, the overall design of Masterpieces is sorta similar to '02 Diamond Kings, with the white canvas-y...ness. No action shots in DK though.

And I still like the Masterpieces framey raised borders. They are still a rare enough occurrence to have some plenty of novelty, and really, if topps' constantly used refractor technology hasn't worn out it's welcome yet, the artsy-fartsy kind of card's coolness factor parallel equivalent can surely get a lot more mileage before it becomes played.