The nebulous 9, an update 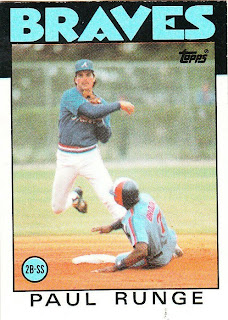 This card here is evidence of what can be achieved when you place a bizarrely named want list up on the sidebar of your blog.

The Nebulous 9 has been a great success so far. In just a few short weeks since starting it, I have received seven cards off the list. In true "nebulous 9" fashion, some of the cards weren't on the list, but they were cards that I mentioned I wanted in the original post.

As cards have come in, I've updated the list, and as I originally suspected the list hasn't been nine cards all the time. Sometimes it was 7 or 8 or even 10. But it's back to 9 now.

The Paul Runge card came from gcrl, who sent me a couple of other cards from that list. He's got a few double-play turn cards lying around. This is an upgrade over my tattered Runge card that was a misfit in my 1986 Topps binder. Now, my Runge can play nicely with the other kids. 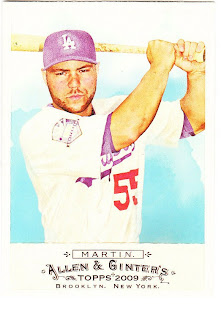 The 2009 Allen & Ginter Russell Martin card came from Joe L. I am in the middle of documenting his fantastic card package and hope to finish it off tonight. I don't know why this card was so hard to find, but I'll never have to think about that again. 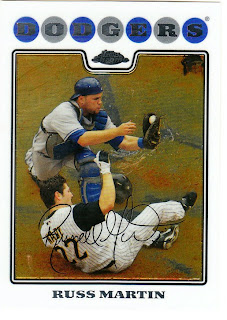 This card arrived twice, once from Joe L. and once from Play at the Plate. That's great because one gets to go in the set binder -- I plan to complete the 2008 Chrome set somewhere around my 138th birthday -- and one in the Dodger binder. 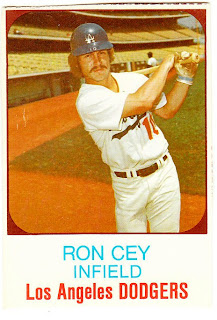 This 1975 Hostess card came from gcrl. This never made it to the Nebulous 9, but was mentioned in the post and I'm thrilled that I have it.
It also means I don't have to cut up this:

I received this from mr. haverkamp. It's a sweet 1975 Hostess panel. Normally I separate these while telling them, "this is going to hurt me more than it hurts you." But now everyone is happy. And I don't have to worry about keeping it perfect because it is wonderfully creased. 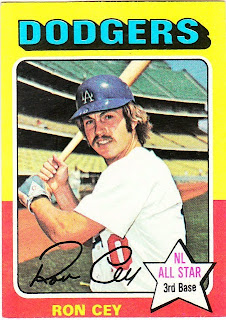 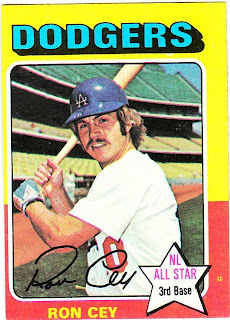 And this one came from gcrl. You can tell the difference between the two cards in the way that they are cut, but just in case you can't:

There they are next to the regular-sized Cey!
I am thrilled that I have the mini version (twice!) of my favorite card of my favorite player. I said I'd try to find something special for anyone who sent that card to me. I think mr. haverkamp was just doing a good deed, but if he sends me his address and what he's interested in collecting I could track something down.
I'm all set on gcrl. His goodies are waiting to send after the Christmas holiday.
Meanwhile, at least one card has appeared on the Nebulous 9 and disappeared almost as quickly. Both Shane and gcrl sent the 2002 Topps Jim Tracy card to me, the last card I needed to complete the Dodger set from that year.
But there are other cards on there that I would love to have, none more so than the 1981 Topps Traded Fernando Valenzuela and the 2009 Wal-Mart black Clayton Kershaw.
So, if you have those, you know what to do.

Play at the Plate said…
The list is a great idea...and will be stolen at some point. I'm glad I can now stop looking for that blasted Runge card.
December 24, 2009 at 1:21 AM