Blog of the year spoils 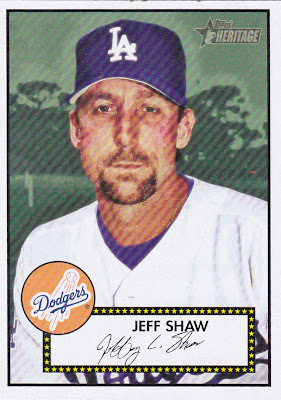 Before getting sick, I came up with the One-Card Challenge. The link to it is over on the sidebar. I'm pleased to announce that the first challenge has been completed. Johnny from Cards From the Quarry is the first person able to check off that last card from his set, thanks to Johngy at Johngy's Beat. (It was a '94 Bowman Ellis Burks, I believe).

I have intentions of finishing off the challenge myself. Just need to find some time this week. (Get back, work! Get BACK!)

The card that inspired the One-Card Challenge is the 2001 Heritage Jeff Shaw card. I received it from Cardboard Catastrophes after waiting quite a while to fill that hole in the set. Then, of course, I received the very same Shaw card a day later.

It came from Wes at Jaybarkerfan's Junk. It was part of my spoils as king of the blogs. Way back at the start of the month -- before I got sick, before the One-Card Challenge -- I was elected "Blog of the Year." It caused a little consternation and I kind of got a big head about it, but in the end, I ended up with free cards. And that's what it's all about, right? Free cards for me. Nothing else matters. I get free cards and everyone lives happily ever after.

In fact, it's probably time I got off my kingly posterior and showed some of the cards I won.

Many of them are '90s Dodgers goodies, which is always entertaining for some collectors, only because I can break out my puzzled look as I say, "I have no idea what this is."

Prepare to drop your knowledge on clueless: 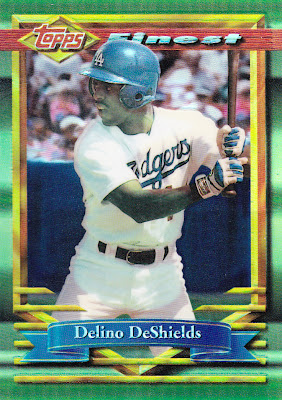 OK, I know this one. A '94 Finest card is a great place to start. I really love this set. I've already named it the "Carnival Midway Set." But I could just as easily name it the "Ribbon Candy Set," except I hate ribbon candy and then these cards would just remind me of how many times I poked the roof of my mouth with nasty, liquorice-tasting shards. Oh, yuck. 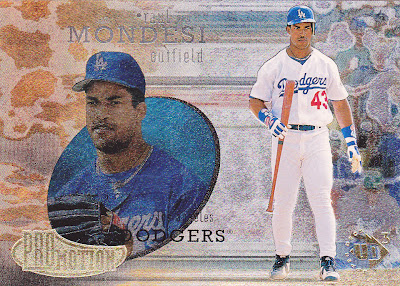 I can't tell you anything else. I'm too lazy/busy to find my Standard Catalog of Baseball Cards book. And there's that wacky "I don't know '90s cards" ignorance" for ya. So, off you go, tell me what this thing is. 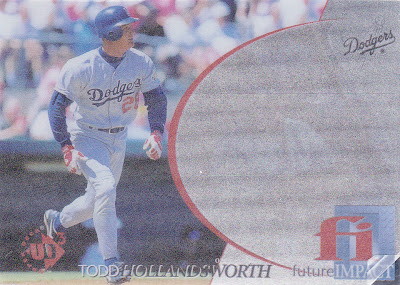 This Todd Hollandsworth UD3 card is about to be peeled, as you can see at lower right ... 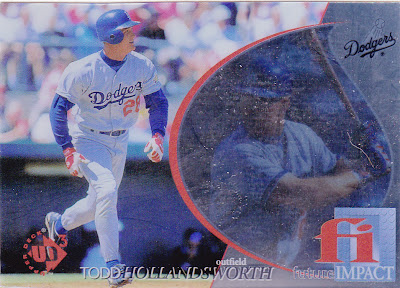 Peeled. And much better. Despite all the dust flecks. 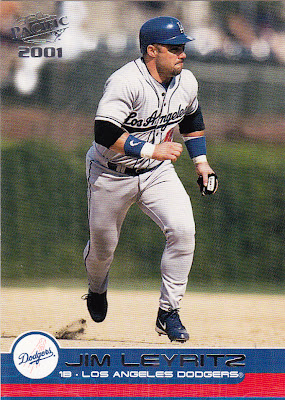 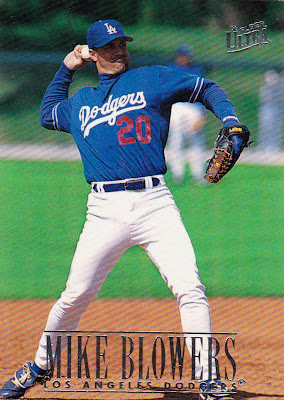 Both Jim Leyritz and Mike Blowers had forgettable stints with the Dodgers. It's because they were carrying around too much Yankee crud. Really. It's brought down many a player. 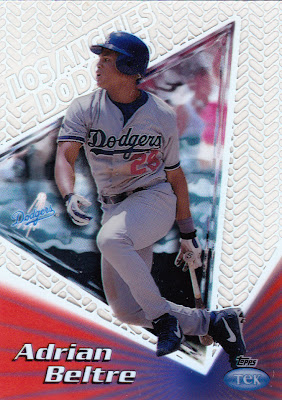 Topps Tek. I don't know what to say that hasn't already been said. The back says there's a patent pending. I wonder how that's going? 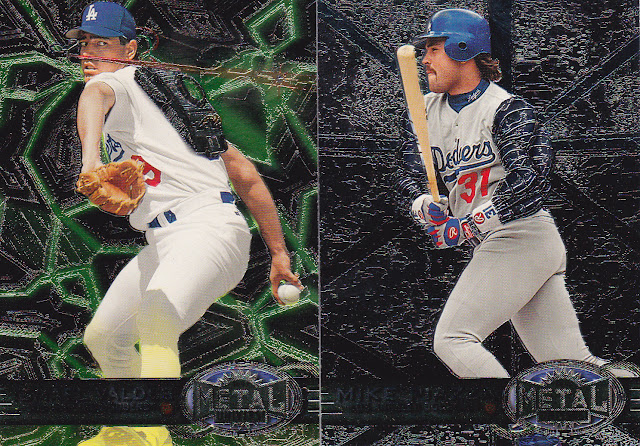 Every time I see Metal cards, I can't help but feel a bit offended. You know the idea for these cards came from someone who said, "Hey what else do nerds like? Robots! Spiders! Lasers! Let's put them all in a set for those dorks!" And Metal was born. 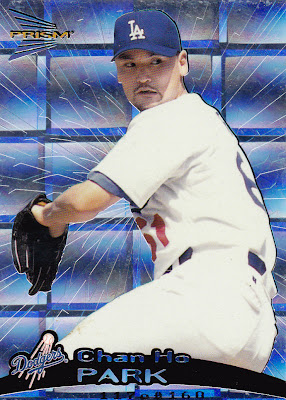 This card is very cool, although serial-numbering on the front is SO '90s. 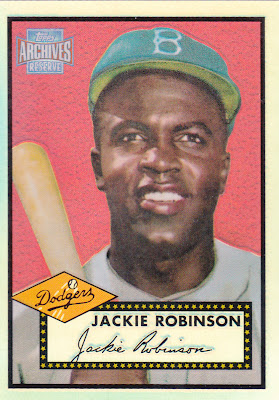 One of the things I must do this weekend now is count up how many fake versions of the 1952 Topps Jackie Robinson card I have. I am guessing "5." I wouldn't be surprised if it's more. 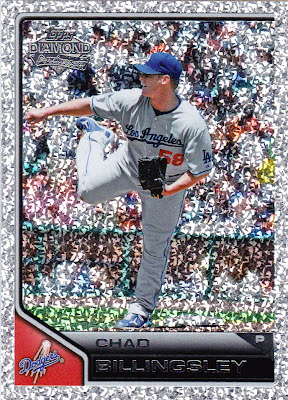 Let's end it with the Lineage portion of the package. Billingsley is currently part of my work password. I don't even care if you figure it out. It's not like you'd find anything fascinating or useful. I comment just about every day at work how ridiculous it is that we have passwords. It'd be like if you needed a password to turn on the lights. Why? 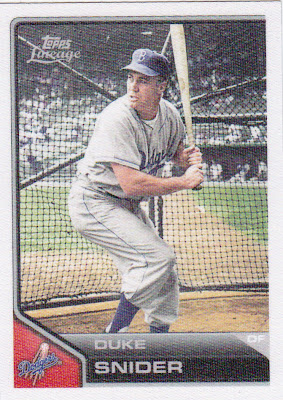 Hey, it's Cloth Dukie! I have two of these now. Come at me with an offer. No one ever makes me offers. I feel like the pretty girl without a date. 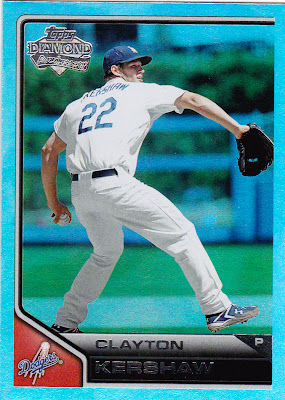 My favorite card of the bunch. Platinum Kershaw gives me every easily attainable parallel of his Lineage card. (I finally had to order the '75 mini myself -- that thing is as rare as the American Pie Frank Zappa card).

It's been great wearing the Blog of the Year crown so far. I promise I won't fall to peasant status.

I'd have to become a Giants fan for that.

Play at the Plate said…
I couldn't find a patent record for Topps Tek. Of course I might not have searched properly.
January 20, 2012 at 1:34 AM

carlsonjok said…
Is the American Pie Zappa really rare? I bought my wife a couple packs of American Pie for her birthday to see if she like them (she didn't.) We got a Zappa. I am looking at it right now.
January 20, 2012 at 7:21 AM

Nick said…
Great post! I've always liked base cards from '90s sets. The parallels are another story, though.

Do you by chance still need Dodgers from late-'90s Pacifc sets? I just traded for a large lot of Pacific-brand cards and came out with a handful of extra Dodgers.
January 20, 2012 at 4:31 PM