Well, that didn't go as planned 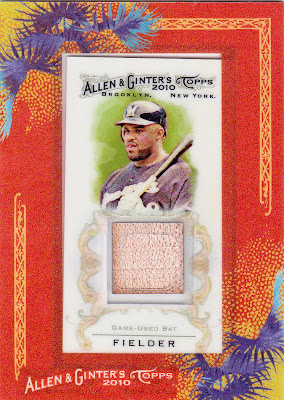 I was involved in Cardboard Heaven's Rose Bowl draft a few weeks ago. It my first card draft and a lot of fun. I quickly figured out that the objective, after finding a few cards you want, was to get cards that could be used in future trades.

And that's what I did. Some of the cards are already in packages waiting for All Work And No Play to get his dull ass to the post office. Some of the other cards you'll see here are posted in a pathetic effort to jump-start some trades -- not that I have any time for that.

The Prince Fielder bat card was obtained to work out a deal with a Brewers fan. Heh. That worked out spectacularly. Fielder will be making his imprint in Detroit for the next nine years. I don't even know if a Tigers fan wants a relic card of a guy in a Brewer uniform. I know, personally, I wouldn't. It's not like I'm clamoring for Angels cards of Juan Rivera. ... OK, bad example. But you know what I mean.

So, Prince may or may not stay with me, if I can accommodate his grocery bill.

Here are a few more cards from the draft that aren't going anywhere: 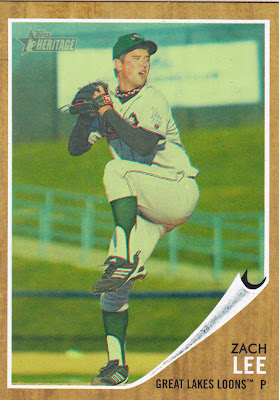 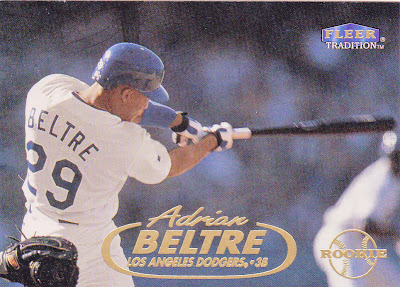 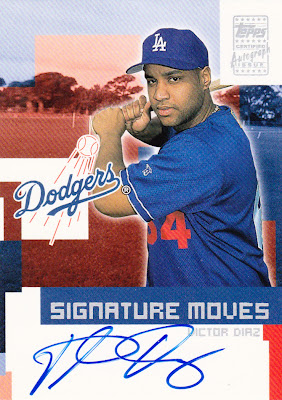 Dodgers, of course. I wish I had a lot of great things to say about these cards, but Victor Diaz never went anywhere, and the Zach Lee card -- which I made my No. 1 draft choice -- is honestly a lousy looking card. It's a minor league photo to begin with, and then there's the green tint thing, which just makes it look like there was a problem with the camera.

Other cards staying with me: 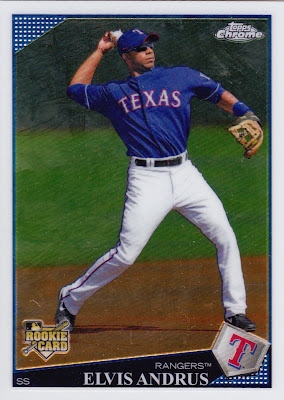 I didn't draft this card until round #23. "What the heck," I thought. "I'll nab it for a Ranger fan." Then I realized, "Crap! I need that card for the set (only 14 cards away). Please nobody pick it. PLEASE nobody pick it!" Nobody picked it. 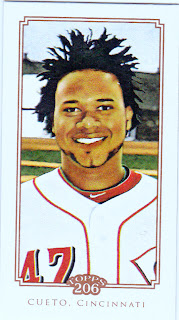 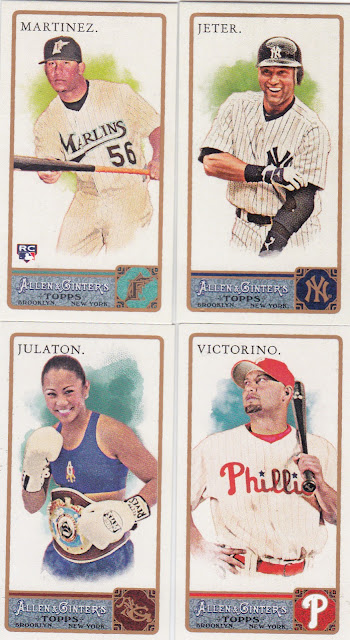 More minis. I have this sudden, irrational attraction to last year's A&G minis. It means I'll always have something to buy in the card aisle. And that's a dangerous thing.

OK, now for stuff that's up for grabs. The best things about these cards is I'd be happy to keep them if I can't find a deal. Or, if I get lazy and decide not to trade ever again. 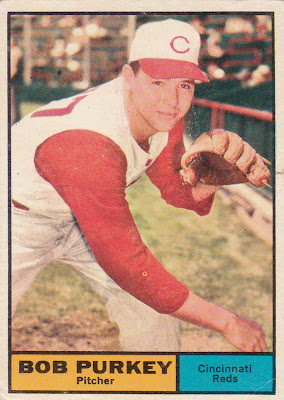 Drafted round 7: I can't resist a vintage card. Even for a set that couldn't possibly be more boring. 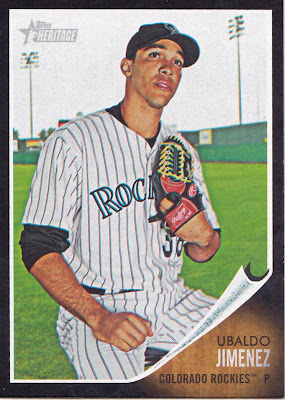 Drafted round 25: I have no idea what Rockies fans think of Jimenez anymore. It seems weird that an Indians fan would want this card. 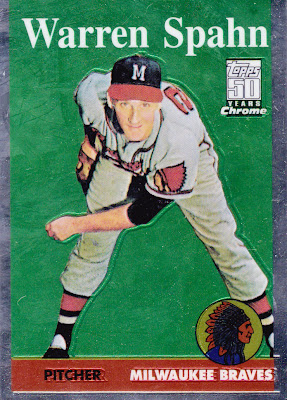 Drafted round 5: This card is so shiny and cool, I don't want to give it up. But I probably will. 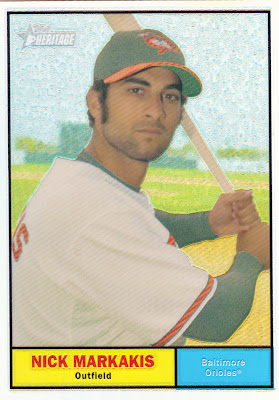 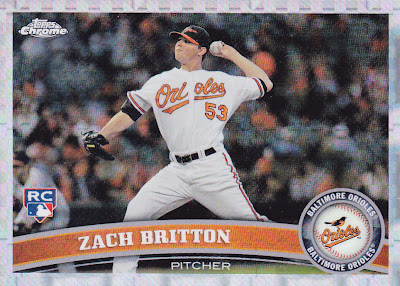 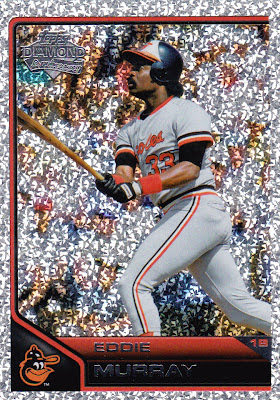 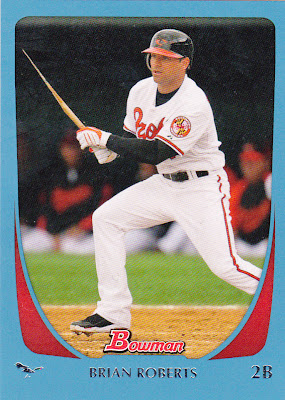 Drafted 10th, 12th, 6th and 14th, respectively: Obviously, I had trading with an Orioles fan in mind. I don't know why. I probably owe somebody somewhere. 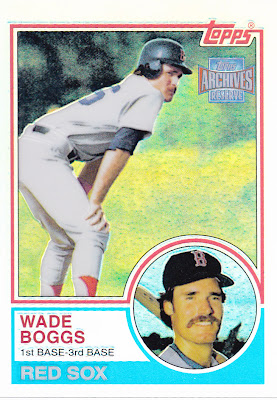 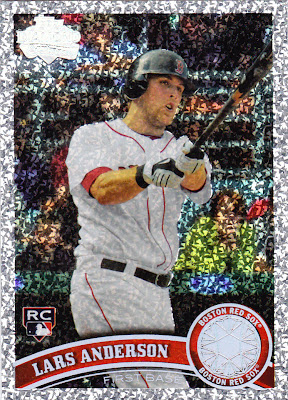 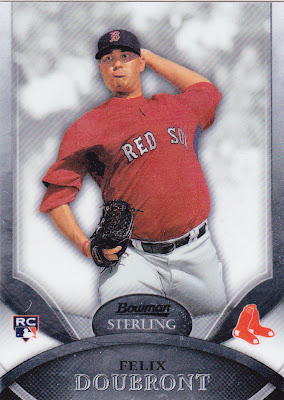 Drafted 9th, 24th and 15th: Same deal with a Red Sox fan. Although they all seem to have disappeared. 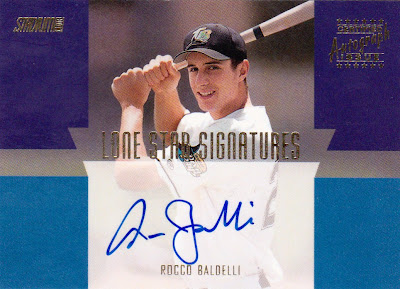 Last card, which I picked up in the bonus round. It's pretty nifty. It's been awhile since I sent something to The Troll. (Been awhile since I pulled any Rays). Maybe this can appear in a "howdy" package some day soon.

Now, if you'll excuse me, I need to rest up for that post office trip. It truly may be the most fun I have all day. Yes, it's been that kind of week.

hiflew said…
I can't speak for all Rockies fans, but I am still a fan of Ubaldo. It's not like he left for more money, he got traded. Plus the Rockies got back a mint's worth of prospects.

I will happily collect all Ubaldo's Rockies cards (I already have that one) and wish him well in the American League. Now he becomes a Giant or a Dodger, it might be a different story but for now I don't dislike the Indians so it's all good.
January 25, 2012 at 4:28 AM

Captain Canuck said…
I wouldn't mind that shiny Lars Anderson. I had a similar Kershaw in mind to trade, but I can't find it. It may be in that package I mailed you last week.
Whoops.
Uh, I'll get back to you.