Joy of an upgraded card, #5 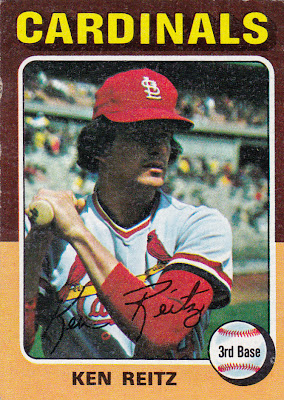 Obviously, I have held on to the rabidly creased Reitz for a long, long, long time. The card came into my possession the first year I started collecting, the very year the card was issued, in 1975.

I don't know how it came to be folded 10 times. I'm pretty certain that I didn't do the folding. I'm guessing I acquired the card from a friend in a desperate bid to accumulate every '75 mini that I could find.

But as the years went on, wrinkly Reitz began to stand out for all the wrong reasons. My other '75 minis from '75 were respectably worn. Rounded corners. Scuffed surfaces. Some minor writing on the back. But they weren't viciously worn like Kenneth.

Today, I received a Reitz more in keeping with my collection. It came with a bunch of other '75 minis from Johngy. Wow, what a cool package, which I will dissect in another post.

Meanwhile, obsessively creased Kenneth will remain, but be transferred to another binder -- the "I remember when I was 9" binder. I enjoy looking through that one quite a bit.

Thanks for the upgrade, Johngy.