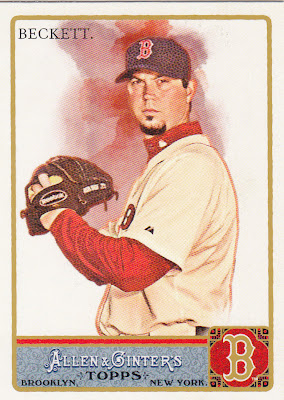 I'm reasonably confident that I will be able to stick to this. Even if I grab a few packs every so often, there's nothing there that's going to make me chase the set. However, Allen & Ginter is the one that could give me some hesitation.

No, the problem I'm going to have is next summer when everyone gets their boxes of A&G and the latest edition of Gint-a-Cuffs commences.

As a three-time Gint-a-Cuffs participant, I know that GAC is a heck of a lot of fun. It's even fun for a loser like me who never wins and always gets dud boxes. So how am I going to sit on the sidelines and watch people win without me? You need a loser to have a winner, right?

But the worst part will be knowing that I won't have those Gint-a-Cuffs posts to fill up blog space in the middle of July. That's like 6 automatic posts right there! I'm going to have to get even more creative -- which isn't good because I think I lost my creative chip somewhere in November and I have been cruising off of trade posts ever since.

The easy solution would be to collect just A&G and only A&G. One set from 2012 isn't going to kill me, right?

Well ... maybe not kill me. But I don't want to go through what I did in 2011 with A&G. I'm still trying to complete it and I'm sick to death of it. I really don't like the idea of trying to finish off a set I don't even like.

Fortunately, I'm a little bit closer to completing the 2011 set, thanks to some recent card packages. I'm only 21 cards away (I was 21 cards away in OCTOBER three years ago. What HAPPENED to me?).

Here is one needed card -- and one card only because I'm sick of looking at them -- from each of four packages: 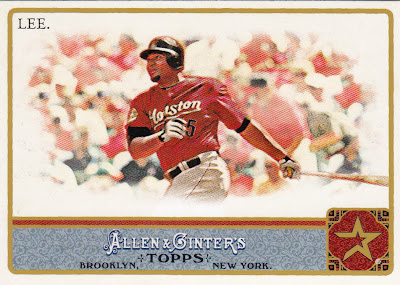 Ron sent me a whole mess of A&G. In fact, if it wasn't for his package, I might've given up on finishing this set like I've given up on '08 Stadium Club and a couple others. I'm showing the Carlos Lee card because I didn't think it was constitutionally possible for Carlos Lee to be a short-print. It's everyone's God-given right to accumulate as many Carlos Lee cards as possible. In fact, I think they're going to be tax-deductible some day. So look for that. I'll be able to help you out when the time comes. A lot. 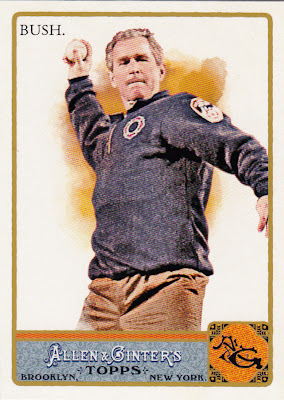 All right, settle down. This card isn't here for any reason other than it's a card I needed. ... Or maybe it ISN'T. Maybe it's here to counter a certain Democrat President's State of the Union speech! Or maybe it's here to remind voters what they could get if they vote for a Republican this November! Or maybe it's here because my father's father's uncle's cousin's daughter was once double-crossed by a Republican turned Democrat turned Libertarian turned Independent turned Modern Whig who promised her a chicken in every pot and instead gave her a rubber chicken swimming in a pool of watered down pork stock! The outrage! Where's that petition? Where's my picket sign? Oh my blood pressure ...

Smed sent me a bunch of other cool cards -- not political at all -- that I'll show at a more festive time. 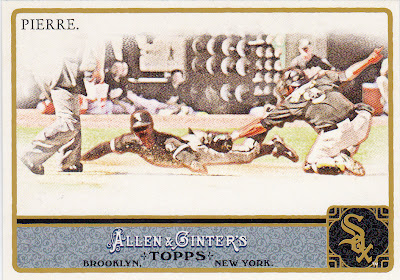 I also received some other non-A&G cards from madding that I'll feature elsewhere. I almost posted the Josh Beckett card that he sent so I could talk about how much madding loves Mr. Beckett. But that's mean -- and even though fans of the World Series champions are fair game -- it's still just mean. So, instead, I'm showing the Juan Pierre card. Now, I know it looks cool to you all scanned here, all back-lit and snazzy. But in person I have to hold the card a foot from my face to know what's going on. That's why I don't like the horizontal A&G cards. They're too fuzzy and they're difficult to register at first glance. 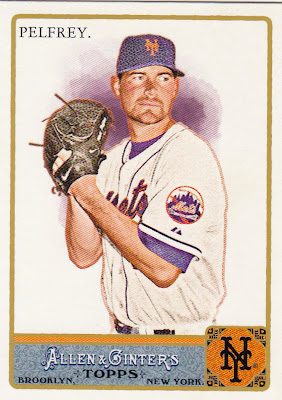 This was part of my collection of cards that I received in Cam's card draft at the end of last month. I'll show some of the other cards I received on another day -- at least the ones I have left. Some have already made their way into card packages.

I was reduced to drafting A&G cards in an effort to finish off my set -- which sort of backfired on me because then I received some of the cards from other bloggers. But, no worries, because I nabbed some minis out of the deal, and those are always fun. Plus, Pelf means I need only 10 more short-prints. Weeeee! (I better be able to get to this card show this weekend).

When I finally complete this set, I'm going to need another binder to house it. I'm starting to get to a stage where I'm running out of room for binders. Either I'm going to have to come up with a creative (ouch, there's that word again) solution, or the mass accumulations have got to stop.

Another reason for avoiding 2012 Topps. There are so many.

dayf said…
I haven't decided what the hell I'm gonna do about 2012 A&G. I've sworn off packs, but I haven't said a damn thing about hobby boxes. (actually I probably have but I've been drinking again so I don't know what I've said anymore)

Honestly? You're the reigning king of card bloggers right now. Pull a Thorzul and ask your readers to send you cards so you can build the set. I'll bet you 10 bucks you can accumulate at least 75% of the set just from donations.
January 24, 2012 at 10:06 PM

carlsonjok said…
Actually, I think dayf is onto something. Demand a tithe from all of your followers or else you will use your bully pulpit to mock them mercilessly.

Nachos Grande said…
But who I will be able to trade Ginter with?! What will you do when I pull a Kershaw auto or relic for third year (out of four)...and the only reason I didn't get one last year is because I don't think he was in the set. So many questions, so many answers I don't like.
January 24, 2012 at 11:13 PM