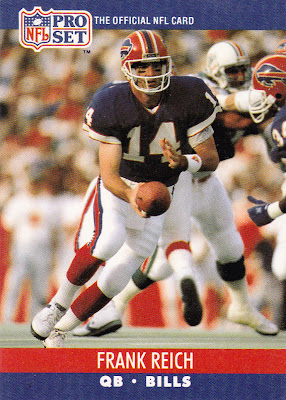 For those who are interested, the 1985 Topps blog is fully functional with its first post. Love the '80s? Then get over there.

One of the best things about the '80s for me was living in a football-crazy city. As you know, I'm not a big football fan anymore, but I used to be totally absorbed in the sport.

You couldn't help it, living in Buffalo. The entire city talked about absolutely nothing but the Bills during the fall. If you didn't like football or sports and lived in the city, then you faked it for four months in order to have something to say to the other people in your neighborhood/class/workplace. The Bills ensured that you would always have something to talk about no matter what the situation. It was so much better than talking about the weather.

As a college student, I had plenty of friends who were Bills fans (fans of other teams in that city were just being jerks). Watching the Bills in a bar and discussing the highlights in a drunken haze was a regular ritual. Later, I landed an internship with a newspaper and was able to cover the team for the paper. The first game I covered was Buffalo against the Packers in October of 1987. I had some very jealous friends.

These were exciting times for Buffalo and the Bills. After years of being labeled a joke by national comedians and a decade of joblessness and depression, the Bills -- thanks to the addition of Bruce Smith, Jim Kelly and Thurman Thomas -- were emerging from some awful years. By the late 1980s, they were a playoff team and the city was beside itself with glee. Before TV newscasts addressed murders and fires, they addressed the Bills.

It was a great time to be alive.

And then I moved away.

The Bills moved on without me. In fact, they got better without me, and started making the Super Bowl year after year. I watched that first Super Bowl against the Giants in 1991 on my brand new 24-inch color television. It was just my wife and I. Newlyweds. In a different town. Far from the Bills. And without any Bills fans to join us.

Fast forward two years later. We had found some Bills fans and invited them over to watch Buffalo play the Houston Oilers in a wild-card playoff game. It was January 3. Nineteen years ago to the day.

The game was blacked out in Buffalo. Not enough tickets were sold. Absolutely scandalous for a city like Buffalo. I knew lots of people in the city who were mortified that they couldn't watch the game.

So we watched for them. And, good god, it was awful.

Warren Moon and the Oilers scored at almost every opportunity. Moon threw four touchdown passes in the first half. At halftime it was 28-3 Oilers. When the game resumed, Bills quarterback Frank Reich threw a pass through the arms of his receiver and an Oilers defensive back grabbed the pass and returned it 58 yards for a touchdown. 35-3. Early in the third quarter.

We all wished the game was blacked out where we were, too.

Then came the most amazing second half of a football game that I have ever seen.

Led by Reich, who had replaced an injured Jim Kelly for the playoffs, the Bills began a comeback. Laughable at first. And then, oh, so serious.

1. Buffalo takes advantage of a squib kick and ends a 10-play drive with a 1-yard TD by Kenneth Davis.

2. Kicker Steve Christie recovers his own onside kick and four plays later, Reich fires a 38-yard TD pass to Don Beebe (who ran partially out of bounds on the play).

3. An Oilers punt puts Bills on their own 41. Three plays later, Andre Reed is catching a Reich pass for a 26-yard touchdown pass.

4. Bills safety Henry Jones intercepts a Moon pass on the Oilers' first play from scrimmage. Buffalo, on a fourth-down play three plays later, elects to go for it instead of kick a field goal. Reich connects with Reed for a touchdown (I remember this play distinctly).

5. With just over three minutes left in the third quarter, after the Oilers flubbed a certain field goal, Reich and Reed connect again for a TD. Absolute bedlam in my apartment.

6. The Oilers manage to hit a field goal before time expired to tie the game at 38-38 and send it into overtime.

7. The Oilers win the coin toss, but Moon throws an interception to the Bills' Nate Odomes (by the way, Darryl Talley was an absolute beast in this game). Bills take advantage of a facemask penalty on the return, run two plays, and Christie kicks a 32-yard field goal for the I-can't-believe-what-I-just-saw victory.

Buffalo would go on to the Super Bowl and get demolished by the Cowboys -- Buffalo's third of four straight Super Bowl losses.

But even that could not diminish the scene in my apartment after the game. The calls back "home" to Buffalo (yes, Buffalo was still "home" then). The "see what you missed?" gloating and discussions.

We were part of an exclusive club, Bills fans from Buffalo who got to see The Comeback, even as an entire city who loved the team (but not enough to sell out the stadium) didn't get to see it at all.

God, football was great back then.

jacobmrley said…
While not a Bills fan, but a certifiable football (and Warren Moon) fan, I recall this game quite clearly as well. Well, half of it. I annoyed my girlfriend at the time that day by telling her "it's the playoffs, we'll have to hang out some other time." But when this game got to 35-3, I called her up and said "OK, baby, let's go to the movies." She gladly accepted (I was irresistible back then). And I swear, I thought it was a joke when I heard later on that the Bills had comeback and won 41-38. That episode taught me never ever stop watching a game.

I never did get my Oilers/Giants Super Bowl in the late 80's/early 90's and that girlfriend and I did ended up getting engaged, but seeing how she was 10 pounds of crazy in a five pound bag, I wisely never married her. I also, for the life of me, can never remember what movie we saw that day when I tell this story.
January 3, 2012 at 2:45 AM

Anonymous said…
Wow, I never knew that was blacked out in Buffalo! That's so sad! I was living in Elmira, NY at the time, which is in the Bills market but I don't think that matters during the playoffs. Either way, it wasn't blacked out there, I guess we're too far away. But yeah I remember watching that. Back then, Moon & his Oilers were considered a threat to go to the Super Bowl and by early in the 3rd it sure looked like they were ready for it in '93. I knew some people who quit watching the game, and I had to tell them to get back in the living room or call them & tell 'em to get back to the game 'cause the Bills caught up... and they acted like I was crazy to think they'd believe something like that LOL

carlsonjok said…
Ah, memories. I lived and died by the Bills during that era. I was living in Columbus, OH at the time and they were rarely on TV. I can remember driving around out in the country so I could listen to the games on a distant, and faint, radio station.

I also remember the comeback game. I almost gave up at 35-3. I still have a commemorative sweatshirt that was sold by the WHAM radio station around here somewhere.
January 3, 2012 at 11:29 AM

Captain Canuck said…
Buffalo is our 'home' team here in Canada. That's right, the NFL gives an entire country one team. Still better than baseball... anyways, all the Bills games were televised. I remember that one very well.
The best part was watching my Cowboys smash them in the Roman Numeral Bowl though....
January 3, 2012 at 1:26 PM